You can't say that I didn't try. Yesterday I wrote:

"We have 25-30 of these hairs, and will make them available to anyone who has the resources and expertise to test them, including - if they wish to participate - the Big Cats in Britain research group, who have made no secret of their animosity towards us".

Mark Fraser of Big Cats in Britain has totally twisted what I said and wrote:

"Why we want to get involved in your research is beyond me, you need to pay for this yourself not get others to pay for it" and later "I will ask you again, why would we want to test hairs that the CFZ found? Get them tested yourselves, but for any credibility get them tested from a source completely independent of the CFZ".

That, my dear fellow, is exactly what we have already said that we are doing.

I did BCIB the courtesy of treating them like a bona fide research group who might be interested in trying to verify our claims, but they seem to have interpreted this as me trying to get them to pay for our research. They even perceived my headline as an attack on them.

Within minutes of me replying to their blog posting, (coincidence, or what?) our old friend Highland Tiger weighed in with another bit of bile, writing:

"Yet here we are, the CFZ boasting they've found evidence, at great pains to ensure that everyone knows that it was CFZ members who found these hairs. Does it really matter who found these hairs. What matters is not the CFZ asking other organisations to do dna sampling for them, but for them to get independent laboratories, (ones without CFZ allegencies),organised and the testing done post haste."

Again, this is exactly what we are trying to do. Like the "revelations" elsewhere in his posting that the WW had less people this year (there is a recession on) and that some speakers pulled out at the last minute (there has been a serious illness, a bereavement and a couple who missed their flight because of the Coventry railway vandalism incident) he - like Mark Fraser - seems to be telling us to do exactly what we are going to do; get independent verification of Lars Thomas's findings.

Well, yes actually. For months he and his idiot cronies have been accusing us of stealing other people's work and claiming it as our own. You can't have it both ways guys. Either we are responsible for something or we are not. And as far as asking other independent organisations to verify our findings with independent tests, this is standard scientific practise, and for the record one major university has already asked for samples.

It appears that HT and to a lesser extent MF will always do their best to misinterpret anything that I or a select band of other folk write. And I thought that I was the one with a cognitive disorder.
Posted by Jon Downes at 8:22 PM 3 comments:

Max has solved the problem posed on the Bloggo a few days back...
Posted by Jon Downes at 2:20 PM 1 comment:

ADMINISTRATIVE CHANGES ON THE PERMANENT DIRECTORATE

Two changes only this year:


Adam Davies has been appointed to the post of Expeditions Co-ordinator. He has many years experience planning and carrying out cryptozoological investigations, and has de facto been doing this job for the CFZ since 2008. I am actually mildly embarrassed that it has taken so long to make this official.


Max Blake is now Deputy Zoological Director. This is particularly important as Richard Freeman will probably be taking a sabbatical relatively soon for family reasons. Both Richard and I have every faith in Max, who - though young - is shaping into a fine zoologist.


I think, however, that I should clear up a few misconceptions about what the role of Zoological Director actually means. For some years we have been planning a Visitor Centre with a significant collection of living exhibits. I appointed Richard Freeman as Zoological Director in 2004, (having pinched the concept, as I have pinched so much else, from Gerald Durrell), because Richard was (and is) in charge of the CFZ animals. He is perfectly qualified for the job as he has a City and Guilds in Animal Management (from the Education Centre at Twycross Zoo in 1988). He is also one of the most knowledgeable animal people I have ever met (being overtaken, in my experience, only by Graham Smith and the late Clinton Keeling).

Richard studied Zoology at Leeds University from 1996, but dropped out part way through his third year because he became disillusioned with the course. He doesn't have a Doctorate either. It amused me the other day to have to explain to a highly entertained Adam Davies that his one-time email Dr3uk@hotmail.co.uk (don't try using it, it doesn't work any more) was because of Richard's admiration for the third Dr Who, Jon Pertwee, and not for any more academic reason. The idea that I have falsified Richard's educational attainments in order to bolster up the academic stature of the CFZ is laughable. I don't care what qualifications people have; indeed some of the biggest idiots I know are the most qualified. It is what people know, and how they apply this knowledge that matters, and Richard is - as I have already said - one of the most highly knowlegeable animal people I know.
Posted by Jon Downes at 12:47 PM No comments: 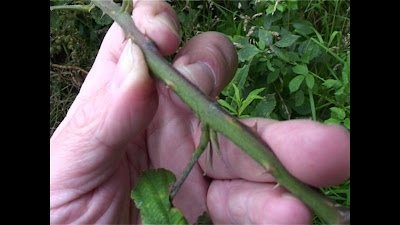 As regular readers will know, for the past eighteen months we have been making a film called Emily and the Big Cats set in Huddisford Woods where, at the weekend, various CFZ bods and attendees at the WW discovered leopard hairs. We were filming a fictionalised version of this on monday, whereby Emily meets Lars Thomas and goes in search of leopard hairs, and - lo and behold - they found some...

If you’re getting Alevel results today then good luck to you.
And now, the news:

This has got absolutely nothing to do with any of the news stories today:

As far as I can figure it out it looks like it’s about demonic possession and banjo playing on the high seas.
Posted by Jon Downes at 12:19 PM No comments: