RICHARD FREEMAN: The Daemons of the Dreamtime #2

THE YARA-MA-YAH-WHO
This red-skinned horror lurks in fig trees, hanging on with its sucker-like toes akin to some gigantic, scarlet tree frog. It is a vampire that feeds on the blood of those who fall asleep beneath its tree. Sexless, the yara-ma-yah-who reproduce like vampires as well, passing their curse on. The can swallow humans whole in their wide, toothless mouths and transform them in their gut, like a caterpillar changing into a butterfly. After several swallowing and regurgitations the victim is transformed into a new yara-ma-yah-who.

The creature may have been created as a bogey-man to stop children wandering off too far into the dangerous bush.
Posted by Jon Downes at 12:08 PM No comments:

Dr Wilton’s research for the University of New South Wales proved dingoes are in danger of dying out through interbreeding in most other parts of Australia, something he says makes the pure strain on Fraser Island more significant.

He said pure strains on the east of the continent probably only exist on Fraser Island and in the Snowy Mountains.

Speaking at a recent fundraising dinner for the conservation group, Save Fraser Island Dingoes (SFID), Dr Wilton formally accepted the group’s invitation to become its patron and said the point of World Heritage listing is lost if island management does not protect wildlife there.

“The whole idea of having heritage areas is to preserve the species in those areas and that should be the priority,” he said.

He claims the mating of siblings among the island dingoes is a sign of a species in dire stress and close to extinction.

He was supported by former QPWS ranger Ray Revill, who now runs a private wildlife sanctuary at Maryborough.

Mr Revill says dingo issues did not exist in his time on the island, throughout much of the 1980s.

He said the four dingo feeding stations then on the island worked well and there was never any aggression from any of the animals.

Other speakers listed a range of other species which are now thought to have disappeared from the island.

SFID president Malcolm Kilpatrick said the organisation’s major funding priority at the moment is to support Rainbow Beach wildlife photographer Jennifer Parkhurst, who is due to appear in court again in November on a list of charges alleging feeding and interacting with dingoes on the island.

Can you imagine Australia without the dingo? http://www.abc.net.au/catalyst/stories/s1335391.htm
Posted by Jon Downes at 12:04 PM No comments:

Thank goodness Jon Downes created the ‘zooform phenomena’ category back in the early 1990s, otherwise so many seemingly supernatural and inaccurately stated ‘cryptids’ would have been lost to us all. Clearly some ‘creatures’ seen throughout the world are not cryptids – they are not mystery animals, or creatures newly discovered, or even beasts ever likely to be discovered; e.g. Mothman, Jersey Devil, Goatman; because, put simply, they are something from beyond the realms of science and flesh and blood nature.


Due to their lack of solidity, even though many witnesses see such forms, these manifestations, clearly of a complex yet misunderstood unnature, are lumped in with the paranormal, an altogether loose category. Some zooform creatures are a sum of many parts, such as hoax, media influence, mass hysteria, or misinterpretation of a known animal, dramatised for greater effect.


In 2005 a bizarre creature, at first said to resemble a four-foot-tall monkey, was observed in the city of Elgin, Illinois, situated 40 miles northwest of Chicago. With a population of over ninety-thousand, it would seem absurd to suggest that an unknown primate could be on the loose, in what is Illinois eighth largest city. Experts at the time commented also that it would be impossible for a large monkey to inhabit the woods despite police combing the far west suburbs in search of a beast first sighted by fifteen-year-old Titiana Williams, who saw the creature lurking near her home one Sunday evening. Miss Williams stated that the animal resembled a monkey that was sitting on the slide. She told her mother about the sighting and several reports emerged in the space of a week.


The spate of sightings featured on NBC5 with reporter Lisa Tutman interviewing a Lt Cecil Smith from the Elgin Police Department. Tutman asked Smith of the possibility that the creature may have simply been a short hairy guy, to which Smith answered that although anything was possible, it seemed as if a chimpanzee may have been the culprit.


Despite the rather ordinary possibility that a monkey may have escaped a private collection, so was born the very brief legend of the Elgin Monkey Man, a pretty non-existent zooform creature that centred upon the Amanda Circle and Fleetwood Drive areas of Elgin. With police scouring the area into the early hours, experts from Brookeville Zoo stated that the descriptions given of the “brown and black” monkey, matched the identity of a chimpanzee.

Of course, no monkey was flushed from the bushes, and the Elgin Monkey Man faded into folklore. Its zooform status was elevated, however, when several news sources claimed that Elgin had its own Abominable Snowman. The mystery had slightly more lasting power than the five-foot-long boa constrictor which was found in 2003 at Churchhill Woods Forest Preserve in Glen Ellyn, and the capture on two occasions of a pacu (piranha relative) in the Fox River.
Posted by Jon Downes at 12:02 PM 1 comment:

Our old mate, and long term supporter of the bloggo, Syd Henley writes:


I have opened a new web site for APRA BOOKS - http://www.apra-books.co.uk/. Needless to say, on my links page I have put a link to the CFZ site and was wondering if you could see your way clear to mention my site either on the blog or on the CFZ links page. 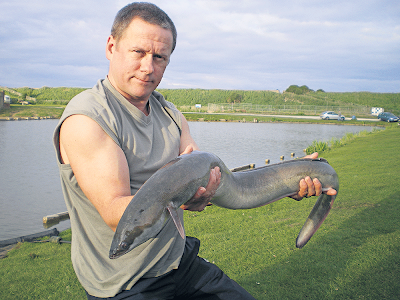 It is interesting to see that eel-fishing has now been banned in the UK. It is not before time, because not only has the population plummeted, but nobody has any realistic explanation for it. Eels have been of economic importance to humankind for thousands of years, and it is embarrasing quite how little we know about them.
Our experiments in eel-keeping were pretty unsuccesful with the last of six eels dying a few weeks ago. But even our attempts at anguilla husbandry opened enough cans of worms to make it perfectly obvious that more research is needed NOW!
Posted by Jon Downes at 11:19 AM 2 comments:

Back in the mists of time when the internet was young someone made a funny penguin video... It still makes me laugh:
http://www.youtube.com/watch?v=oqjEGdA2Y7Q
Posted by Jon Downes at 11:18 AM No comments: