JEFFERSON – The boa constrictor rumored to be swimming in Lake Hopatcong is growing in reputation, gaining a mention on David Letterman's show, inspiring T-shirts, donuts and drinks, but remaining as camera shy as the Loch Ness monster.
"I can't believe nobody's taken a picture of this thing yet," Jefferson Mayor Russ Felter said. "Somebody's got to take a picture of the snake. I'm asking the public to help."
Felter said he's seen people who have said they saw the boa constrictor on social media, but the town or other officials have not fielded calls from them.
"If you see something, call us, then put it on Facebook. Call us right away. And take a picture or even a video if you can. That's the info we need," Felter said. "There are 5,000 boats on the lake Saturday and Sunday, somebody's got to see this thing."
The state Department of Environmental Protection and state police have been actively searching and setting up traps in the area where the snake has reportedly been seen. 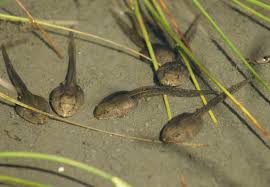 Hi Jon,In one of the OTTs you were talking about the strange way frog tadpoles were failing to develop and I might have come across the explanation. It could be the way salt is spread on roads in winter.

http://www.mdsg.umd.edu/news/road-deicers-could-be-making-region-too-salty
Posted by Jon Downes at 12:36 PM No comments:

What the Heck is This Thing on the Game Tracker Cam?
Bigfoot Evidence - Blogger
I can admit it. This one has me stumped. I have no idea what this is on the game cam. If anyone can identify what this is, please feel free to leave the

Did anyone else catch the Bigfoot Hunter's visit to Alabama?
scout.com
I wish I had the video clip to post. That show is entertaining just because it is so hokey to begin with. They visited "central Alabama" for the "first time

This is the Most Relaxing Bigfoot Video I've Ever Seen
blogspot.com
Whether or not you agree with Ed that there are 9 bigfoot in the above photo, some of which are less than a foot tall, the fact of the matter is he does

Radio Host and Crew See 'Bigfoot' in Washington
Cryptozoology News
TROUT LAKE, Wash. -- A radio host says he and his crew witnessed what they believe was a juvenile Bigfoot last weekend. Clyde Lewis, host of the

Into the Woods - Bigfoot Documentary
Bigfoot Research News
A Bigfoot skeptic and believer go on a journey in search of answers on this mysterious phenomenon. Along the way they stop at the Oklahoma Bigfoot
Posted by Jon Downes at 12:13 PM No comments:

*  Jon Downes, the Editor of all these ventures (and several others) is an old hippy of 54 who - together with an orange kitten named after a song by Frank Zappa puts it all together from a converted potato shed in a tumbledown cottage deep in rural Devon which he shares with various fish, and sometimes a small Indian frog. He is ably assisted by his lovely wife Corinna, his bulldog/boxer Prudence, his elderly mother-in-law, and a motley collection of social malcontents. Plus.. did we mention the orange kitten?
Posted by Jon Downes at 11:56 AM No comments:

RICHARD FREEMAN: You can see that 'hibagon' is waring shoes!
Posted by Jon Downes at 11:54 AM No comments: ON THIS DAY IN 1965 -
The Beach Boys' "California Girls" was released.

AND TO WHISTLE WHILE YOU WORK...
(Music that may have some relevance to items also on this page, or may just reflect my mood on the day)
Posted by Jon Downes at 7:58 AM No comments: