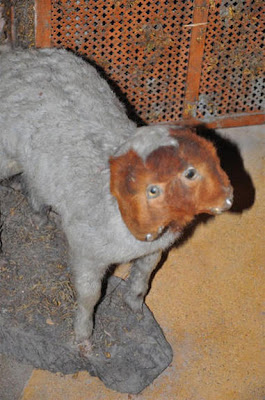 Reposted from the Paranormal Buffalo email group, courtesy of Rick. The original message was posted by someone called Tad and read: I was in Beirut for a vacation and went out to a castle in Lebanon, which had a strange exhibit of animal curiosities, including the pictured two-headed goat.
Posted by Jon Downes at 11:48 AM No comments:

Over on Cryptomundo, Loren has news of a new monkey from Myanmar
http://www.cryptomundo.com/cryptozoo-news/strykeri/ I thought that your readers might be interested in the following video that shows two long anacondas in Brazil.

In the first part of the video, Thiago, a Brazilian, happened to capture on his cell phone camera a backhoe lifting an anaconda out of a canal that was being dredged to clean it. This was a few weeks ago.

No one was aware that the anaconda was in the canal. The operator put the bucket in the water, and lo and behold, when he lifted it, there was this anaconda hanging from both sides of the bucket!

Thiago wrote to me that, "from the way we estimate measurements in life everyday," it appeared to be about 9 meters long.

He could be right.

Using the men as references for height for the backhoe, the backhoe could have been 4 meters in height. This is consistent with backhoes sold by companies such as John Deer, Caterpillar and Komatsu, among others, which, indeed, sell backhoes, etc that are over 5 meters in height.

Thiago wrote that the backhoe operator lifted the bucket to its full height, and the anaconda touched the ground on both sides. If one meter of the anaconda was stretched over the mouth of the bucket, it would have an approximate length of (4x2+1)meters = 9 meters.

The second part of the video includes a clip that I was sent when I was requesting more information on anacondas. I was informed that that it is a picture that has been circulating in Brazil since the 1960s, and the snake was said to have been measured at over 12 meters long (3 meters longer than the accepted world record for a snake's length.)

From the angle picture, it is difficult to estimate the length of the snake, but using the people and tractor as a reference, it appears that it would be at least 8 meters.

A very interesting thing about the second snake is that I was informed that it was killed in Mato Grosso, which, as you probably already aware, is the same general geographical location that Colonel Percy Fawcett claimed to have killed a 62 foot (about 18 meters) anaconda.

DOES ANYONE KNOW WHO OWNS THIS PICTURE? VARIOUS MEMBERS OF DOC'S FAMILY FIND IT AMUSING AND WANT IT IN THE REISSUE OF MONSTRUM.. 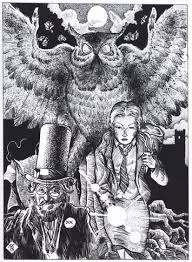 On this day in 1960 the world's first successful kidney transplant was performed by Michael Woodruff. Interestingly, some organ transplant recipients claim to “inherit” memories, interests and in a few cases languages from the original owners of the organ despite there being no known mechanism by which these could be transferred...
And now, the news: