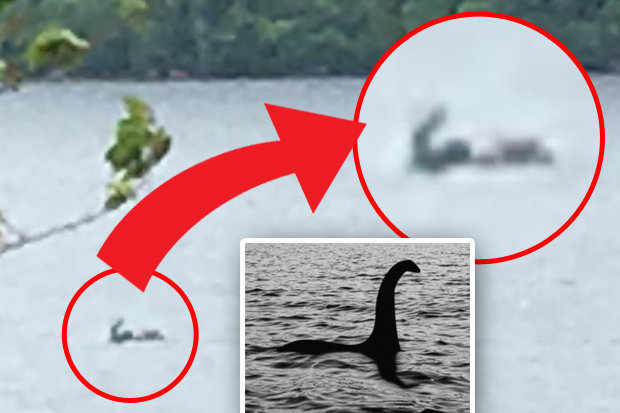 CASCADE/GETTY
NESSIE FOUND? A photograph supposedly showing the Loch Ness Monster near Urquhart Castle
Peter Jackson and Phillippa Wearne, from Sydney, Australia, were driving alongside Loch Ness when they saw something big and fast moving through the water.
http://worldsourcemedia.com/loch-ness-monster-photo-of-big-and-fast-nessie-near-urquhart-castle/

The Sun
THE LOCH Ness Monster has been “caught on camera” by stunned holidaymakers – in the second sighting this year. Australian tourists Peter Jackson ...
Loch Ness Monster found? Tourists snap 'big and fast Nessie moving through water' - Daily Star
Full Coverage
Posted by Jon Downes at 4:30 AM No comments:

MUIRHEAD`S MYSTERIES: The case of the entombed rat.

I am familiar with entombed toads,frogs,bats,tortoise and lizards but this old story,from the Kalamazoo Gazette (Montana) of September 2nd 1837 is the first time I have come across an entombed rat.

A LIVE RAT ENTOMBED IN STONE  ."Yesterday week, as two miners, of the name of Jonathan Thompson, and George Douglass, were occupied in blasting a drift, a strata of solid stone, called scar limestone, at Alson Moor,, six fathoms below the surface, they into a small cavity of the rock, out of which to their surprise sprang a full grown rat. The miners endeavoured to take the animal alive , but in their attempts to do so, it was killed. How long the rat had been embedded in its living grave, and in what manner it had contrived in such a situation to exist ( considering the organic formation of the animal,) are questions that must be left to conjecture. On examination, the strata around the cavity was found to be perfectly solid and close in every part." - Newcastle Journal

There is an Alston Moor in Cumbria and also an Alson Moor.
Posted by Jon Downes at 4:30 AM No comments:

In 1992, Sheriff Morrisette speaks to Footprinters about Bigfoot

The Daily World
“A small neighbor of mine has just given me a demonstration of patriotism that brought tears to my eyes,” writes Carolyn Wager in a letter to the editor

NEWS.com.au
A “wood ape” is local Arkansas terminology for what's more commonly known as a Sasquatch or Bigfoot: A large, humanoid ape said to roam remote ...
Please Read About Rob Lowe's Very Real, Near-Death Encounter With Bigfoot - Pedestrian TV
TV News Roundup: Rob Lowe's A&E Supernatural Reality Series Sets Premiere Date - Variety
The Lowe Files Trailer Might Be the Most Delightfully Insane Thing You'll See All Day - E! Online
Full Coverage
'This thing was not a bear': Hunt for Bigfoot underway in Pennsylvania
AOL
It all started when a couple from Crawford County in Pennsylvania contacted the "godfather" of all Bigfoot hunters to take a look at their property after ...

Bigfoot Encounters Around Marble Mountain
Bigfoot Evidence - blogger
PacWest Bigfoot sits down with Bill to talk about his bigfoot experience while hiking and camping around Lillypad Lake in the Marble Mountains region ...
Posted by Jon Downes at 4:30 AM No comments:

ON THIS DAY IN - 1838 Coronation of Queen Victoria in Westminster Abbey, London
And now some more recent news from the CFZ Newsdesk