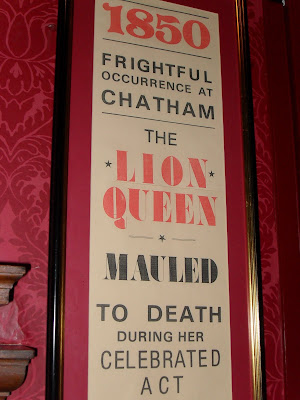 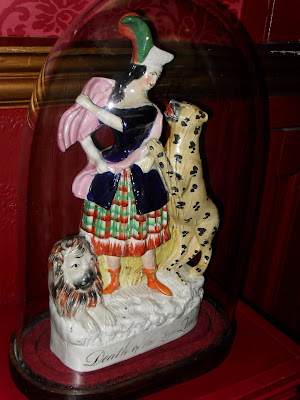 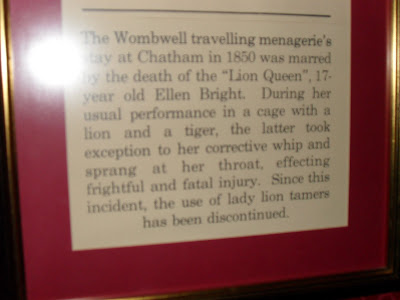 Whilst visiting my local museum (Rochester) I took some photos of an old poster and a connecting sculpture, pertaining to a poor woman, dubbed the 'Lion Queen' who many years ago during a show in Chatham was attacked and killed by two captive big cats. The taxonomy fail is blatantly obvious and I'm hoping to enquire at the museum as to who made the cock-up!
Posted by Jon Downes at 11:57 AM No comments:

Back when Heuvelmans was alive a 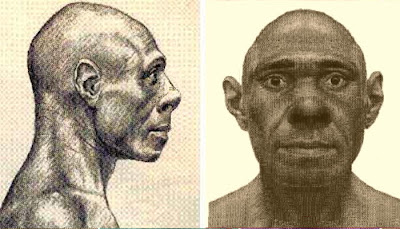 However, I did the following little demonstration for him as well: I altered Jay Maternes' reconstruction of the Shanidar Neanderthal to something like the Iceman's snubnosed condition just by rotating the end of the nose relative to the rest of the head. 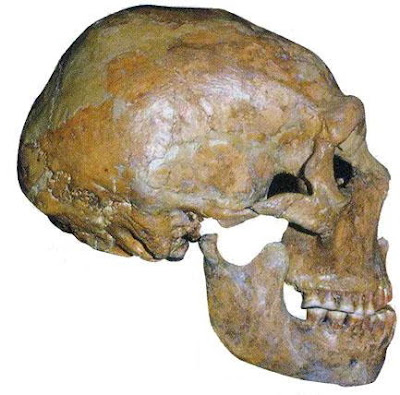 hal (although Shanidar is in the Near East): the highest point of the cranium is in back and the skull slopes steeply away from that point both before and behind.

This could be what causes some witnesses to say the almas has a head that is pointed in back. Other types of early humans do not have this feature and in fact some of the first Neanderthal skulls found (such as the one at La Chapelle-aux-Saints) were incorrectly reconstructed without it, and with the profile of the cranium too low in back.

Homo erectus incidentally never has anything like it and if anything, erectus tends to have a higher peak in the front of the cranium, and tapers away to the rear in profile.
Posted by Jon Downes at 11:52 AM No comments:

Chad Arment posted this to the StrangeArk email group:


The paper:Migration of Antarctic Minke Whales to the Arctic


Abstract: The Antarctic minke whale (Balaenoptera bonaerensis), and the common minke whale found in the North Atlantic (Balaenoptera acutorostrata acutorostrata), undertake synchronized seasonal migrations to feeding areas at their respective poles during spring, and to the tropics in the autumn where they overwinter. Differences in the timing of seasons between hemispheres prevent these species from mixing. Here, based upon analysis of mitochondrial and microsatellite DNA profiles, we report the observation of a single B. bonaerensis in 1996, and a hybrid with maternal contribution from B. bonaerensis in 2007, in the Arctic Northeast Atlantic. Paternal contribution was not conclusively resolved. This is the first documentation of B. bonaerensis north of the tropics, and, the first documentation of hybridization between minke whale species.
Posted by Jon Downes at 11:50 AM No comments:

It is with great pleasure that we can announce that Trevor Beer, one of the greatest contemporary naturalists and natural history writers will be appearing at this year's Weird Weekend talking about The Beast of Exmoor....
Posted by Jon Downes at 11:48 AM No comments:

On this day in 1754 Horace Walpole invented the word 'serendipity'... which was fortunate.
And now, the news:

You're going to need a bigger boat:
http://www.youtube.com/watch?v=8gciFoEbOA8
Posted by Jon Downes at 11:34 AM No comments: