I think that yes, it quite probably could....
Posted by Jon Downes at 11:45 AM No comments:

Email ThisBlogThis!Share to TwitterShare to FacebookShare to Pinterest
Labels: india 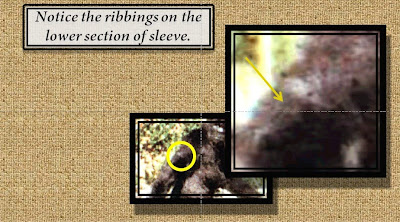 Stumbled across your website while looking for a particular photo that I seem to be unable to find. Read your history of the film and was surprised to find the comments about a bottle opener and buckle. You might want to look at the video http://www.youtube.com/watch?v=dljgkfR72F4 in which is shown "D" loops for the American football shoulder pads, strap for holding the bottom part of the costume up, and zipper in the front of the costume. The most obvious part however is the separation in the right sleeve which in itself is sufficient evidence to classify the film as a hoax.

Attached is a copy of the sleeve separation from the video.
Posted by Jon Downes at 11:15 AM 3 comments:

TOM BRYAN: A Defence of the Whole Animal

It was ironic that less than thirty miles from where the great ecologist and prophet John Muir nearly lost his precious eyesight in an industrial accident in 1867 nearly a hundred years later I had my own eyes opened to the beauty of the natural world that he so cherished and defended. Partly through his example, I wanted to be a naturalist, moreover, a particular kind of one.


“A crypto what?”
“A crypto-zoologist” I replied proudly. “I want to be a crypto-zoologist when I grow up; a person who discovers new or unusual species of animals.”
Quite a tall order for a short kid in patched blue jeans in a small mid-western American town, only hitherto known for its goldfish hatchery and soybean production. But I knew what I wanted and set about reading all I could in the local Carnegie library, a fascinating collage of dark hardwood shelves, pleasant but musty smells, old yellow globes and maps with names like Abyssinia on them, amid ancient books with hand-painted plates. I poured over Holland’s moth book, Ditmars and Cope on reptiles and Jordan’s book of fishes. These were all classics of the time but are now only found in antiquarian bookshops; all well thumbed books of great character. I can still recall the rustling and crinkling of the thin papers which protected the coloured plates.


These were living books so I naturally carried their lessons outdoors. In a town without theatre, cinema or bookshop its real culture lay with the scenery and wildlife. Local ponds, creeks and rivers were the first to yield up extraordinary secrets. Fish and reptiles were varied and abundant. I discovered huge snapping turtles whose jaws could snap a broomstick. I listened carefully as old men taught me how to catch snappers bare-handed by feeling for them under the cut-banks of creeks. These turtle catchers all had ten fingers and when I asked why they never lost fingers they’d grin, spit a stream of tobacco juice and reply “ a snapper usually prefers to face the bank so his tail is handy, so you just hoist him out.” It was an important lesson for a young naturalist. Trust experience; trust local experts.


Fish varied from the ancient grindle or dogfish to primitive sturgeon and garfish. I watched fishermen haul up gigantic flathead catfish on strings of twine, tied to floating milk jugs. Occasionally I would see species of large paddlefish, “spoonbill cats”, which despite near-extinction from pollution reminded me of freshwater versions of Britain’s huge basking sharks.


The insect world was a treasure trove of information. I kept the cocoons of the lovely local silkworm moths: Cecropia, Polyphemus, Luna, Promethea, Imperial, Io -- apt names for the divine azures, purples, reds and yellow. My brother and I sketched every species of snake, including the copperhead, the timber rattler, the fox snakes; learning which were poisonous: “Red then yellow, kill a fellow” “Red then black, friend of jack.”

As a bonus to this invaluable fieldwork I made another important discovery. I found the marvellous books of the eminent cryptozoologist, the Belgian Bernard Heuvelmans. Here was the inspiration I needed. I read true tales of the discovery or capture of animals long denied by the scientific experts: the giant sloth, the mountain gorilla, the Komodo dragon, the giant squid.


My goal was a clear one. Armed with romantic ideals and the books of Heuvelmans, I went to university to become a cryptozoologist! I found chemistry and mathematics difficult but not as difficult as the zoology and biology professors who assured me “that all significant animals have been discovered. The days of Louis Agassiz are over, I’m afraid. Science is no longer interested in the whole animal.”

I was thus expected to forget my childish nonsense and begin measuring the tissue fibre of gastropods or confining my research to academic journals.


I soon had a decision to make. Would I become a professional specialist and lose most of my interest and enjoyment or would I find another way to make a living that didn’t destroy my enthusiasm? I chose the latter and have had to make a living in various ways without losing my innate sense of wonder and magic inspired by the natural world. I trained as a librarian and work as a writer. It is the “road less travelled by” but one I have no regrets at taking.


Unfortunately this professional smugness still rules. Scorn is still heaped on those who maintain an open mind on such issues as the Loch Ness creature or the yeti, just as scorn was poured on those brave Newfoundlanders who were grappling with giant squid whilst scientists in London and Paris declared that squid much over three feet in length were physically impossible! Not so long ago, fishermen in Madagascar were netting coelacanths, fish declared by experts to have been extinct for over seventy million years.


But the real point of this essay is that we don’t need to focus so much on the extraordinary creatures yet to be discovered (whilst keeping an open mind). Rather, we need to remind ourselves that every child is a cryptozoologist in the making. Every child experiences the wonder and delight of first discovery, whether seeing a crab in a rock pool or a hedgehog in the back garden.

Not being native to Britain, I still experience that wonder on learning about a new creature or hearing the name of an unfamiliar plant or animal for the first time. Could we not at least be more tolerant of the creatures of myth and mystery? A professional archaeologist once told me that children make many important discoveries of tools and artefacts. When I puzzled over this he replied, “Children aren’t afraid to keep open minds arising from their natural curiosity. They often notice something which an adult would dismiss out of hand intellectually, without further investigation.”


Before we become too smug or correct about the natural world we inhabit, perhaps we should always remind ourselves that everyday discoveries are being made through the fresh eyes of children. This may lead to more wondrous discoveries yet to come. By retaining this freshly open and humble view, we continually discover the world through the unprejudiced eyes of the child. This is real science; real knowledge; real discovery.


It also proves the value of John Muir’s other famous quote: “When one tugs at a single thing in nature, he finds it attached to the rest of the world.” Scientists and experts also need reminding of the whole animal, even if that whole animal apparently exists only in myth and legend. John Muir learned what most children already know: everything is connected, even myth and reality - the whole animal.
Posted by Jon Downes at 11:14 AM No comments:

It's SPINY MOUSE! (insert suitable jingle here and silly cartoon of a mouse in a cape) **

In the aftermath of this years Weird Weekend Oll Lewis of the CFZ gave me a hair sample taken from one of the spiny mice in the CFZ menagerie. The general idea was that I should be able to pinpont the actual species of said animal since the CFZ weren't exactly sure of it. Well, I have now compared it with several species from the collection at the museum in Copenhagen without finding a complete match, so no exact identity as of yet - but I shall keep on searching, and hopefully find an answer, though I will have to compare the hairs with some more reference animals. Stay tuned!

** There is actually a South African species called the Cape Spiny Mouse.
Posted by Jon Downes at 11:12 AM No comments: 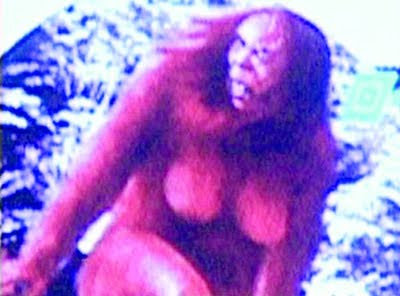 This picture, which purports to be a file photo of "an unidentified Bigfoot in Shennongjia, China's Hubei Province," arrived in my inbox on Friday afternoon, accompanying a story on "the appearance of a Bigfoot on Taibai Mountain in Xi'an, Shaanxi".

Has anyone seen it before, and does anyone have any ideas about its provenance?
Posted by Jon Downes at 10:52 AM 1 comment:

On this day in 1814 the London beer flood killed 8 people and demolished 2 houses when 1,470,000 L of beer flowed down the Tottenham Court Road in a tsunami like wave.
And now, the news:

Tenuously linked but here's Michael Buble's rather good version of the Spiderman theme:
http://www.youtube.com/watch?v=9WQJg5fP0U8
Posted by Jon Downes at 10:52 AM No comments: