In his classic treatise on sea-serpents, Bernard Heuvelmans recorded the stranding of an unidentified carcass on southern New Jersey’s Cape May Peninsula, in 1887. He recorded its discovery in an appendix to his epic work, but made no mention of it in the text. A list of sources for strandings omitted from further discussion cited a November 1887 issue of the long-defunct Boston Courier, otherwise undated. Ben Roesch, reviewing the Father of Cryptozoology’s work in 1998, could not locate the article in question. “Until I am able to do so,” he wrote, “this carcass remains a literal unknown".
But no longer. 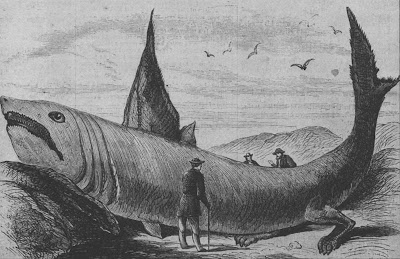 Fanciful depiction of a stranded basking shark from Harper’s Magazine, 1868.
I recently obtained a copy of the long-missing report, with generous assistance from Henry Scannell, curator of Reference and Information Services at the Boston Public Library. The story, headlined “The Stranded Sea Serpent,” appeared on page one of the Boston Courier, on 6 November 1887. It reads: 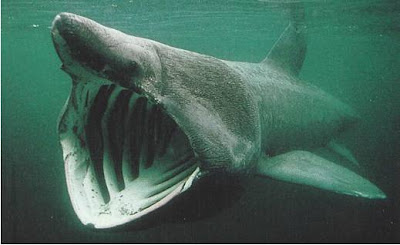 A basking shark at sea. Cape May’s big-mouthed globster?
"The sea serpent business is practically ruined. A genuine specimen of the tribe has been washed ashore at Cape May, and the mystery is forever dispelled. Who will be greatly excited by a glimpse of a creature which will now be set down in the tables of the naturalists, and ticked with a long and learned name? When there were grave doubts whether the sea serpent really existed, then indeed there was a certain amount of pleasure and excitement in running across a monster declared by half the world to be fabulous; but now the whole business is reduced to the level of the commonplaces. 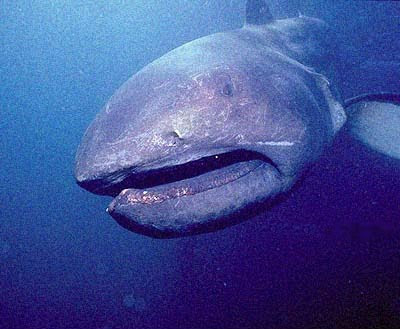 A megamouth shark, unknown until 1976.

Now that the serpent is in the hands of scientists, moreover, they have measured him, and it is painful to see how far short he falls of his supposed length. What are a paltry dozen feet beside the forty or fifty with which tradition had endowed him? Who can ever again really respect a beast that has fallen so absurdly short of its reputation? Even its big mouth and thick hair can do very little toward making up for this fatal deficiency of extent, and unless a bigger specimen can be forwarded from beneath the seawater immediately the fame of the race is irretrievably injured. Proprietors of seaside resorts which depend for success upon the reported presence of the sea serpent off their shores should send a communication at once to the king of the clan to lay the case before him, and to see if a bigger specimen cannot be induced to sacrifice himself for the good of his kind by coming to be measured. With a little diplomacy much may yet be done to save the fading fame of the sea serpent, but it must be done quickly, before the specimen ashore at Cape May shall have been generally received as typical. "

No “long and learned name” was forthcoming, but the facetious article provides certain basic information about the Cape May globster—specifically, its twelve-foot length, plus an allusion to its “big mouth and thick hair.” It is somewhat surprising that Dr. Heuvelmans, with said article in hand, did not suggest a possible identify for the stranded creature. He made do with less in other cases, including five between 1808 and 1896 wherein he proposed the existence of large unknown sharks.

The Cape May specimen’s “big mouth” instantly suggests that common globster candidate, the basking shark, well known to ichthyologists since 1765. A possible alternate suspect might be the megamouth shark, unrecognized by science until 1976. Both exceed the relatively modest twelve-foot length of Cape May’s “serpent,” with record lengths of forty feet and eighteen feet, respectively.

But what of the monster’s “thick hair”? Fish have none, but as a shark’s skin decomposes, the underlying muscle fibers may protrude, resembling hair that varies in color from white to red. Such was the case, we’re told, with Scotland’s fifty-five-foot Stronsa beast of 1808, which Heuvelmans confidently labeled a “giant basking shark or unknown shark.” Again, his hesitation in identifying Cape May’s specimen may be the greatest mystery involved in the affair.

Who were the unnamed scientists described as measuring the carcass and removing it for further study? Where did they take the carcass? Did they ever reach a final verdict on the stranded beast’s identity? If so, that finding never rated mention in the Boston Courier or any other East Coast newspaper so far discovered, much less in the august New York Times. Perhaps, therefore, some vestige of the mystery endures.

My husband and I took our kids target shooting. A helicopter was over our heads the entire time annoying us. We thought at first they were curious of why and what we were shooting. Later when we watched the video we noticed something that looked like bigfoot running in the trees. We assume now the helicopter was hunting the bigfoot. Scary!

Robert Schneck wrote to me asking whether we could possibly post some of the videos that Andy Roberts has done of the badgers in his garden. We emailed Andy who was kind enough to post three of them on Youtube for us. Here is the first one:

One of our two regular badger garden visitors. Only about 20 seconds though. The other vids I have posted have much more badger. After trying for several night to lure them- unsuccessfuly- with meal worms, we went for jam sandwiches. Result is now a diabetic brock with a serious jam habit. Lovely creature though. The woods near us are crammed with setts and three must be 100s of them. Hoping to get badger cubs on film soon.

DOLITTLE IN THE DOCK

Whilst trying to find an illustration for yesterday's post on Dr Dolittle by Dr S, I found myself wading through a mass of self-congratulatory verbeage bemoaning the `racism` of the early volumes of the series. The tribe of monkeys in the first book were `obviously` a metaphor for African natives, who like the monkeys had no knowledge of sanitary practises and were dying in their hundreds from plague.By showing Bumpo Jollilinki, the African Prince of the first book as gullible enough to believe in the literal truth of the Fairy Tale of Sleeping Beauty, Lofting was apparently demeaning all black people and promoting the worst aspects of Colonialism.


This conveniently ignores the portrait of Bumpo in the later books as loyal, kind, compassionate and resourceful. Or the only Native American character as being wise, studious and brave, or - most importantly - the portrayal of some of the white characters as being cruel, greedy, stupid and obsessed with blood sports!


Really, this sord of one-sided moralising is both irritating and counter-producetive. There! I have got off my soap box now,
Posted by Jon Downes at 11:25 AM 1 comment:

HAYLEY GETS THE BIT BETWEEN HER TEETH...

When a show is proving difficult to market, my love for the theatre pushes me on and the performance inspires me to try again and try harder and keep trying until seats are sold. So when a friend sent me a link to a show that is going to be touring theatres soon, to see what I thought, I recoiled in horror and disgust.

On this day in 1916 Albert Einstein published his general theory of relativity.
And now the news:

Speaking of Einstein...
http://www.youtube.com/watch?v=KtLh7VdhKmk
Posted by Jon Downes at 11:13 AM No comments:

KARL SHUKER PAYS TRIBUTE TO A HERO OF US ALL 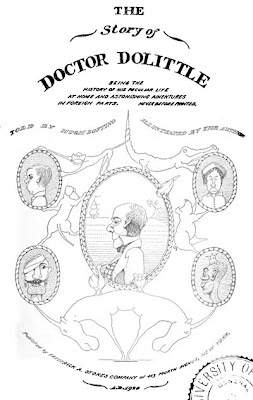