If you were at a lecture and someone asked the audience, ‘What do you think cryptozoology is?’, and some funny person stood up and said something along the lines of, "I’d say it’s where you conjure up demons and dabble in the occult!" would you laugh or be worried?

Well, we laughed.
Because that was Ronan.
And Ronan has a knack for saying funny things like that.

I’m sorry to say I was only able to go to the Weird Weekend for one day: the Saturday. But I must say: that Saturday was one of the most hilarious Saturdays of my life! Packed full of jokes, Yamaha crimps, and funny, strange, and yet pleasing surprises.

I attended my dad’s talk, as you do, because if you don’t then you get disowned. I’d seen the movie before but not with the music and I was all, “WOW DAD YOU’RE SO AWESOME.” And everyone in the audience was all, “WOW NICK YOU HAVE CLIPS OF GIANT BUGS THERE.”
And Lily was all, “Well done, dad. You know how to use Movie Maker.”

I laughed! I stared! I facepalmed!

I get that it seemed like a good idea to make a GIANT BUG film at the time, but I’m a woman of science and so I hate it when people do stupid stuff and fail to take into account that it’s not possible.

Ahem.
A woman of far-fetched occurrences that are both theoretically and scientifically possible. hee hee…
Can I tell you one thing that confused some and amused others? That worried many and disappointed a handful?
Yes? Good. When dad said, "It wouldn’t be crypto without a bit of crypto."
WHUUUT-

My sister and I were both interested to hear that phobias come from the survival instincts of when we were just cavemen and cavewomen. However, when questions time came around, I was really confused upon hearing my mother’s bamboozling comment about Cyril the Hong Kong centipede. Can someone please explain to me what she was on about? Please? No? Ah well.

To summarise, I discovered I have a long-lost brother who looks just like my sister (hair wise). John and Lily both had the same hair style and hair colour, much to the amusement of Jon (not to be confused with my ‘brother’ John), who thought that my sister was sitting where John was and that John was sitting next to me and Mum.

So, I have a new sibling.

Do you know what made me really happy at the end of the talk, though? Mum saying, "Girls, after this we can have a pot noodle each."

Just because I can, I’m going to do these in parts again. So, thank you for wasting your time reading my blog and I hope you’re excited for the next one!

Last week we posted two videos about the supposedly extinct pink-headed duck. Somehow I totally missed this letter, which came with them...

If you go to the website http://richardthorns.webs.com/ you can see the whole trip written up, plus the preparations fot two months time. Just go to the sidebar and click.

I hope you find it interesting. I'd be interested to know what you think and feel free to share if you wish.; I am back there in December 2010, I hope the timing will this time be spot-on!

Richard Thorns.
PS The photo of the mysterious duck on the lake was a Spot-billed duck - the white WAS the tertials rather than sunlight. :-(

Posted by Jon Downes at 6:11 PM No comments:

Email ThisBlogThis!Share to TwitterShare to FacebookShare to Pinterest
Labels: ducks

Summary
1.  Previous research shows that canopy-associated shifts from an algal to a detritus-based food web can affect anuran tadpoles negatively. This may not be true of salamander larvae, however, because they are predators.

2.  To investigate the influence of canopy cover on the survival and growth of salamanders, and on the subsequent export of biomass from ponds, we conducted a mesocosm experiment examining effects of shading (high or low) and litter (leaves or grass) on Ambystoma maculatum (a forest specialist) and A. texanum (a habitat generalist). Additionally, we reanalysed data from Williams, Rittenhouse & Semlitsch (2008) to examine the effects of shading and litter on biomass export of three anurans: Rana sphenocephala, Pseudacris crucifer and Hyla versicolor.

3.  In contrast to previous studies, we found that salamanders performed better in mesocosms with the characteristics of closed canopy ponds (high shade and leaf litter), which resulted in a greater export of biomass. Salamanders grew larger under closed canopy conditions, probably because of differences in prey abundance among treatments. Anurans responded differently to canopy cover than caudates. The biomass export of R. sphenocephala and P. crucifer was reduced under closed canopy conditions (although differently affected by litter and shading), while the biomass of H. versicolor was not affected.

This and other studies suggest that changes in canopy cover may induce a shift in the amphibians emerging from ponds, from primarily anurans in open canopy ponds to primarily salamanders in closed canopy ponds. Additional multispecies studies will determine whether these trends hold true for more diverse amphibian assemblages. Further investigation into the effects of canopy cover on salamanders will be important for understanding aquatic-terrestrial linkages.

PRUDENCE UPDATE: Getting Better all the Time... 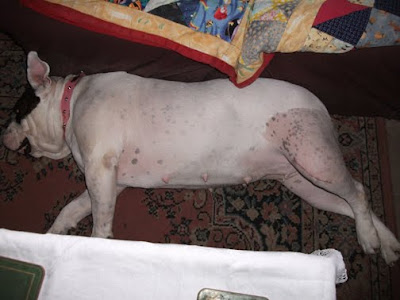 Prudence has been confined to the kitchen for much of the past 48 hours. However, the anaesthetic and post-op opiates have worn off now and she wants to go further afield. Normally she spends much of the day lying on the sofa in the sitting room but until her bones heal she mustn't jump on and off things, so we have placed boxes of Weird Weekend impendemata on all the chairs and the sofa, much to the poor little doggy-girl's dismay and disgruntlement.

However, Davey C and family turned up last night, and despite being obviously in pain, Pru had a lovely time being fussed by everyone. This evening Lee Walker and family are scheduled to turn up....

(Note her shaved leg and scar)

On this day in 1946 Mark Snow, the composer of the X Files theme tune, was born.
And now the news:

At the cocktail party the other day I was shocked to discover that certain young CFZ members didn't get my reference to mushrooms and snakes when I was handing out badges, so just for them:
http://weebls-stuff.com/songs/badgers/

Karl Shuker discovers the Bird of Dreams inside his Eclectarium:
http://eclectariumshuker.blogspot.com/2011/08/discovering-bird-of-dreams.html