FOR SO LONG AS THERE IS THE UNFERTILISED OVUM OF THE DOMESTIC FOWL, I'LL BE YOUR EGG MAN 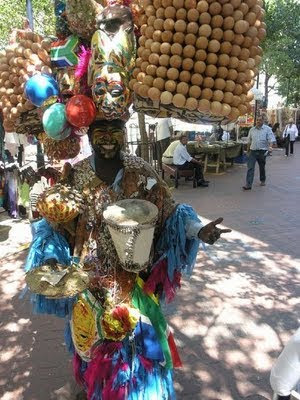 
However, sometimes they send me totally off-topic gems. Like this:

'A walking work of art, Gregory Da Silva is more than an odd spectacle – he is a symbol of Africa’s many diverse cultures…In the first heady years of the African Union, the world’s eyes are increasingly turned to the continent from which humankind first appeared. Beneath the seemingly impenetrable mask of violence portrayed in popular media, lies a living and thriving cultural climate which Des Warde finds well depicted by West African street artist Gregory Da Silva.

His head dress weighs up to twenty five kilograms, his body is armored with artifacts and his face painted with tribal patterns and an undying smile. Each day, Gregory Da Silva presents the city center with a new display of his symbolic art....'
Posted by Jon Downes at 12:16 PM No comments:

MIKE HALLOWELL: Spaggs and the frog 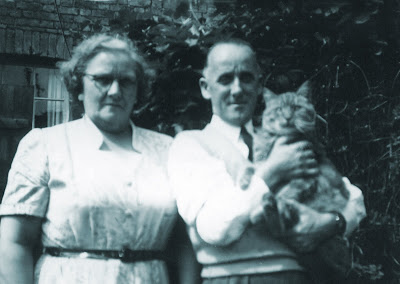 Apologies to all my fans out there – yes, all three of them - for the long hiatus between this blog and my last. This was due to both Jackie and I suffering from severe health problems. Jackie was hospitalised for some time due to a spinal problem, and it looks like she may need an operation. We'll know more after she has seen a neurosurgeon who will make the final decision. Jackie wants to pass on her heartfelt thanks to the many CFZ people who sent her encouraging messages – they really gave her a lift during what has proved to be a difficult time. I've had a rough time due to the symptoms of my narcolepsy, some of which are getting worse. Its a bugger, but I try not to let then get me down. The traditional treatment for narcolepsy in Geordieland is to see a specialist privately who will place bottles of brown ale over your chakras, and it has helped considerably. Those who are impoverished and can't afford to go private are forced to turn to the Geordie NHS, which uses not genuine brown ale but Ace lager.

Okay, down to business. Years ago, my paternal grandmother Joan Hallowell had a cat. It was called Spaggs – goodness knows why – and was a battle-hardened street warrior covered in scars due to previous encounters with Sunderland supporters, which it disliked intensely.

Spaggs was a psychic cat. My grandfather, Billy Hallowell, worked at the Co-op store in Newgate Street, Newcastle-upon-Tyne, and used to catch a train back to Jarrow at the end of the working day. He would arrive home at around 6.15pm, and Spaggs would meet him at the station and accompany him back to the family home at Connaught Terrace. But the weird thing was this; sometimes my grandfather would be required to work late, and as there wasn't a telephone at home he had no way of alerting my grandmother to the fact. Yet, she always knew when my grandfather was going to be late home, as Spaggs would not make his usual trip to the station at 6pm. Somehow, he just knew that my grandfather wasn't on the train.

After some time had passed by – maybe an hour - Spaggs would suddenly jump up and hurry out of the door. My grandmother knew that the train containing my grandfather was approaching the nearby station, for Spaggs was at long last making his way there. She would then finish preparing his evening meal, which would be ready on the table for him when he got home.

So, Spaggs not only had an uncanny ability to know when my grandfather wasn't on the train, but also when he was. How? I do not know, but numerous family members testified to the fact.

I personally saw Spaggs refrain from going to the station at the normal time to meet my grandfather on two occasions. “Your granda is going to be late”, I recall Gran Joan saying. And he was. I also recall the cat spontaneously going to the station later on when, somehow, he knew Granda Bill was finally on the train.

Recently I met an old neighbour of my grandparents, both of whom have now passed away. She related to me another odd incident involving Spaggs which my grandmother had told her about, and which I had hitherto been unaware of.

One day, my grandmother saw Spaggs sitting in his wicker basket, and was surprised to espy a large frog nestling in between his paws. Just where the frog hailed from was something of a mystery, for there were no ponds, streams or rivers nearby. She lived in a fully urbanised area. Instinctively she went to pick the amphibian interloper up so that she could put it outside, but Spaggs wasn't happy about this at all. As her hand approached the basket, the cat batted it away forcefully with its paw.

Over the next few days, the frog would appear and disappear repeatedly. Spaggs was very protective towards it, and on one occasion gently picked it up and placed it in its water bowl. Then the frog disappeared and never returned.

What on earth caused a cat to bond with a frog? Answers on a postcard please, or as a comment here. Also, I'd like to hear rational explanations from sceptics as to just how Spaggs knew when my grandfather was on the train or not. Arguing that the witnesses in my family were mistaken, deluded, making it up, fantasising, on drugs, hallucinating or whatever is pointless; they weren't. They – and I – know what we saw.
Posted by Jon Downes at 12:12 PM No comments:

http://hauntedskies.blogspot.com/2011/04/haunted-skies-blog-george-filerufos-and.html
Posted by Jon Downes at 12:11 PM No comments:

On this day in 1948 Sir Terry Pratchett was born.
And now the news:

Can you tell what it is yet:
http://www.youtube.com/watch?v=ulnaEvuU_To
Posted by Jon Downes at 12:11 PM No comments:

DALE DRINNON ON THE AFRICAN UNICORN WHICH KILLS ELEPHANTS

http://frontiersofzoology.blogspot.com/2011/04/african-unicorn-killer-of-elephants.html
Posted by Jon Downes at 11:46 AM No comments:

http://hauntedskies.blogspot.com/2011/04/film-taken-at-rendlesham-forest-suffolk.html
Posted by Jon Downes at 11:37 AM No comments: