THANKS AND AN APOLOGY FOR MAX 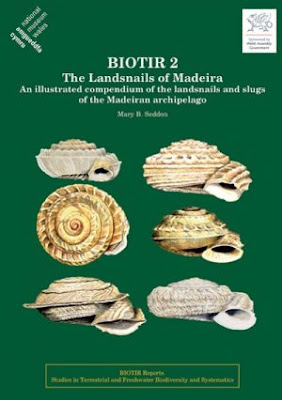 Thank you Max for so very kindly getting this book for me. As you know I have been wanting it for a long time, both for personal interest and for the beginning of a new CFZ project.


Apologies, however, for leaving it in your rucksack.

The fact that this discovery took place in David Attenborough's garden makes it of mildly fortean-zoological interest.

A murder mystery dating back to the 1800s may yet be solved - thanks to wildlife enthusiast David Attenborough. The skull of a woman, believed to be Julia Martha Thomas, was discovered in the presenter's garden, in Park Road, Richmond, on Friday. Local historians now believe a murder mystery dating from 1879 could finally have been solved.

Neighbours in the street were intrigued by the grisly find and 40-year-old Marina Solin said it had peaked her interest. She said: "It would be interesting to learn a bit more about it all."

Workmen at the 84-year-old wildlife presenter's home found the skull while excavating part of the garden ready for a new extension. The land, where the extension was intended to go, was on the site of the old Hole in the Wall pub which Sir David bought last year. Police believe the human remains belong to Mrs Thomas, a former Park Road resident who was killed by her maid 131 years ago.

Katherine Webster was found guilty of killing her mistress and mutilating the body when she was sentenced in July of 1879. On the day of her execution, Webster reportedly told her priest: "I alone committed the murder of Mrs Thomas. I pushed her down stairs and strangled her." Despite her confession and the recovered mutilated remains the head of murdered Julia Thomas was never found. Now years later the mystery of where the murdered Mrs Thomas' head disappeared to may well have been solved with the skull being found just metres from her former home.

Neighbour David Porter, 64, tried to keep upbeat about the gruesome find, and joked: "It was nothing to do with me." He added: "What can you say really - it's interesting but it shows they never looked very far for the head." The spot where the discovery was made has been cordoned off and police were today still guarding the sealed site.

Police said specialists would be removing and examining the skull.
Posted by Jon Downes at 10:19 AM No comments: 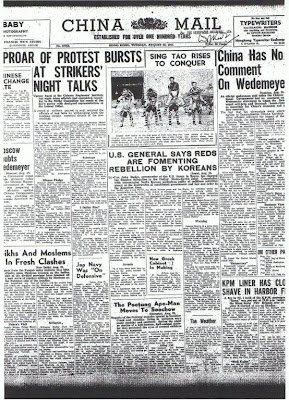 Whilst looking for mystery animal reports from Hong Kong last week I came across a rather interesting report of an ape man in pre-Communist Shanghai. I wasn`t aware of any other urban ape-men until Richard Freeman passed on details to me of an orang pendek type creature in Singapore (see below) from his forthcoming book on orang pendek. The only other reference I am aware of to this Shanghai (or, rather, Pootung) ape man is in the book Outbreak! The Encyclopaedia of Extraordinary Social Behaviour by Hilary Evans and Robert Bartholomew.

Reports of the Pootung monster spread to Soochow Creek and families living in sampans were made panicky and confused during the night by stories of a half-human, half animal monster that scratched the eyes of several children living in sampans. The reports started last week in the Pootung area and spread quickly up and down the water front. The reports. The reports, coupled with rumours that an abduction gang is in operation, led to six volunteer policemen beating a woman to death in an attempt to get a confession and beating another unconscious.
Families living in sampans on Soochow Creek, which winds through the heart of Shanghai dividing the former International Settlement from the former Japanese Hongkew district, said the monster appeared on Saturday night (1).The police were unable to find evidence (?) while strangers were threatened by sampan folks. Confusion started when a sampan woman lulling a baby to sleep screamed for help when she thought she saw a dark form rising from the water.

The Customs and Harbour police rowed up the creek and could not find anything, while crowds gathered on the bank.

Shortly after midnight last night, hearing screams from another woman again the dwellers of the smelly tidal creek, which carries much sewage in Shanghai, found a brown and white alley cat splashing about dozens of families in terror- United Press (2)

Outbreak! Says: “Cryptozoology, per se, also shows up marginally in relation to a “Water Monster Panic” that occurred in Shanghai,China, in August 1947, An “amphibious monster scare” resulted in the death by drowning of a man who jumped overboard when he heard screams of what he thought was the monster. Two other men were beaten to death by a crowd “who believed they were somehow linked to the monster” (3)

Freeman has written: “The New Paper, Singapore`s first English language paper launched in 1988, has run a number of such reports [of small upright, walking apes-RM]

“When driving my taxi past the Fire Station on Upper Bukit Timah road in the middle of the night I hit what I thought was a child that ran out in the middle of the road.It was on the car bonnet and then snarled at me-it was like a monkey but so big! It ran off injured covered in blood, and holding its` arm which was broken. (4)

I hope to start seriously collecting data for a book on Chinese Forteana; I hope the most comprehensive collection yet. If anyone would like to help collect info, please can they contact me at richmuirhead@ntlworld.com? Thanks.

Wait a minute somethings wrong
He`s a man with a plan
He`s here to do us a favour
A little human sacrifice
It`s just supply and demand….. 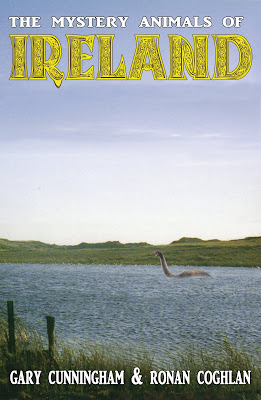 Well, I'm pleased to say that there is now a brand new edition to the growing Mystery Animals of... series. This one covers Ireland and comes to us courtesy of cryptozoologist Gary Cunningham and surely the funniest (in every sense of the word!) man in Forteana, Ronan Coghlan, who my wife Dana refers to as a "lovable hoot"!

I read this book in two sittings, late at night and into the early hours, and while sprawled out on the settee, and I can say for certain that this is an absolutely excellent addition to this on-going series of titles.

What Gary and Coggers have done is to finally, definitively, and once and for all, offer the reader a comprehensive, in-depth, and very well-written study of the many and varied mystery animals of Ireland that cover centuries-past to the present day.

Read on
Posted by Jon Downes at 9:57 AM No comments:

ROBERT SCHNECK: The ant which ain't 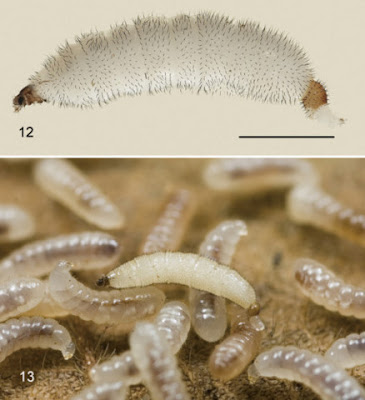 Apart from hoverflies, the Diptera are not my favorite insects. Nevertheless, I think I love Vestigipoda longiseta.

"Most of what you see in the lower of the two photoes above are larvae of army ants of the genus Aenictus. The odd one out is the whiter 'larva' in the centre, which is not a larva at all, but a fully adult female of the phorid fly Vestigipoda longiseta! (The upper photo shows the same animal in close-up.) This bizarre animal makes its living by imitating its host larvae and being fed by the larvae's deluded carers. Five species of Vestigipoda have been described to date from Malaysia (Disney et al., 1998; Murayama et al., 2008)."

For more, visit Christopher Taylor's blog "Catalogue of Organisms"
http://coo.fieldofscience.com/2010/09/freak-of-week-wingless-legless-flies.html
Posted by Jon Downes at 9:51 AM No comments:

I'm back from now but thanks to all the folks who have been running the newsblog and YNT whilst Gavin and myself have been away.

On this day in 1914 Dylan Thomas was born. Thomas is one of Britain's most read and best loved poets.

Hmm, wonder if he saw it coming... Anyway, here is Paul's finest hour:
http://www.youtube.com/watch?v=Ya85knuDzp8
Posted by Jon Downes at 9:51 AM No comments: