DALE DRINNON: "Patty" Is Not A Man In A Suit. 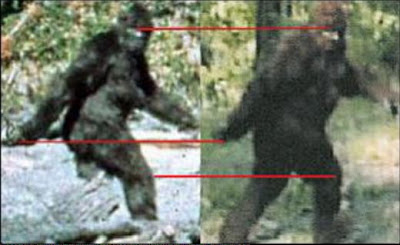 Several versions of the comparison between the alleged Sasquatch female in the Patterson-Gimlin film footage and an ordinary human male in a movie gorilla costume: the man in a suit has shorter arms and the fit of the suit is looser than Patty's pelt. The braincase is dramatically smaller in Patty's case, probably in Homo erectus brain size. The cranium of the human in the suit is a good deal larger. 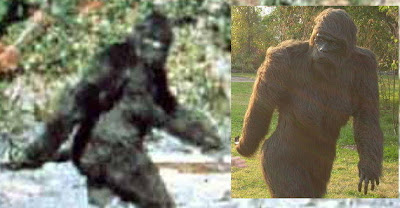 If it needs to be pointed out, a human's head inside a hooded mask of a gorilla costume is not going to have a proportionately smaller head inside the suit than he had before he put the mask on. 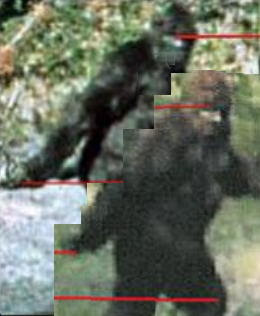 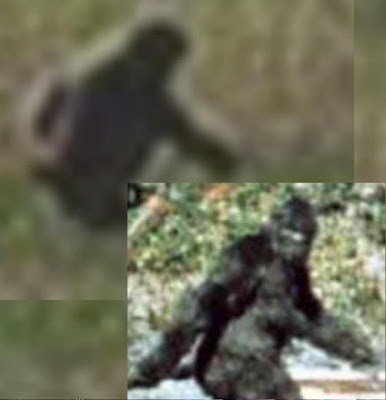 The last pasteup, Image 1, shows the direct comparison in proportionate sizes of the Patterson female (blow up of a still from the film footage, right) and the skulls of Homo erectus above and Homo sapiens below. I have excised the top of the head from the still and put it in the top centre. This section begins at the top of the eye sockets, goes around the top and then cuts off at the back of the neck, level to where the ears would be. You cannot have a human skull in any alternate position when the face is fitted to the mask, human faces do not flex off the skulls. And this interpretation of the size of the face and head are in proportion to the body. Now you can have a suit with a fat padded belly trying to make the head look smaller by illusion, but that would not shrink the actual size of the face or cranium as a fraction of the total height, nor can it possibly change the way they fit together.

In my opinon, not only is the braincase INSIDE the peaked head deficient below the normal range of Homo sapiens, it is probably even deficient for an erectus, proportionately speaking. And the peak of the head cannot be any part of the head that has brains in it, in any event the braincase would be further down. And if it is supposed to be a peaked hood worn with a mask, then the peaked part most decidedly would not be any part of the head that would have any brains in it. The cranium MUST be lower down than the point on top.

This is not an argument that is original to me: Grover Krantz and other supporters of the film have been saying this all along. 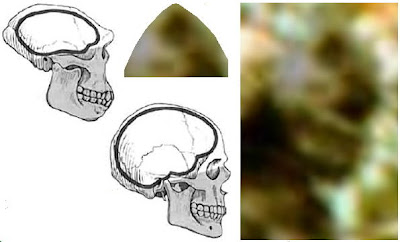 I defer to Krantz and submit that the creature depicted in the film footage is possibly a surviving Gigantopithecus.

And that is based purely on anatomy alone: all other arguments alleging impropriety on Patterson's part or "suspicious circumstances" of any sort, actually have no further bearing on the case nor yet any relevance to the evaluation of the anatomy depicted in the film footage itself. Paul Clacher has an interesting relatively new Thylacoleo sighting on his website - the proverbial dead animal beside the highway. Sadly no one ever seems to stop and take photos or collect carcasses!
20100807 - Pearson's Lookout (NSW) Sighting - December 2008 around 4:00 pm Reported 07/08/2010
Subject: Thylacoleo sighting
In December 2008, I was travelling south on the Castlereagh Hwy near Pearson's Lookout between the towns of Capertee and Ilford on the way back to Sydney after an overnight delivery trip through Orange, Dubbo and Mudgee in an 8 tonne rigid truck. No bonnet so I have unobscured vision. This is on the edge of the Capertee Valley and is about 900 - 1000 metres asl. The dropoff to the LHS (east) is steep to the valley. Late in the afternoon, say around 4.00 pm and about 200m south past the lookout, I noticed 2 X roadkill's on the southbound side just on the shoulder of the road.
Doing about 80km/h, I had a 5 or 6 second look at a small dead roo and something else. The markings on the torso of the other animal were dark brown / black and the main colour was tan. The markings made me look closer and the carcass was intact. The ears were rounded, the head was stout and like a lion cub and the front paws were huge in comparison to it's body size. The back paws and tail were obscured because of the position it landed in after being run over. (probably feeding on the small roo). My first thoughts were of a small lion, but the dark marking's threw me. It was a thick set animal about 500 - 600mm long. For the rest of the trip to Sydney (2.75 hrs) I couldn't stop wondering what this thing was, and having told the story to several people, I still couldn't come up with a logical explanation.
Read on at the CFZ Australia blog...
Posted by Jon Downes at 12:33 PM No comments:

ROBERT SCHNECK: Cats Would Kill Us In Our Sleep 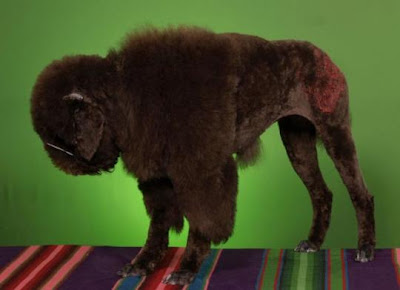 If you needed any more proof of the long-suffering and forgiving nature of dogs, consider what might be called "extreme grooming." These are some of the more restrained examples.To see what happens when groomers get imaginative, visit the site: http://therealowner.com/dogs/extremely-creative-dog-grooming/ 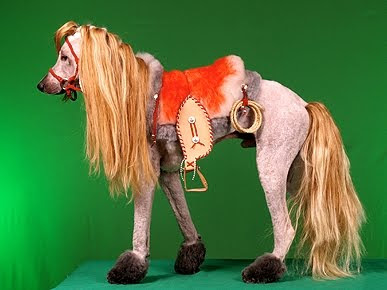 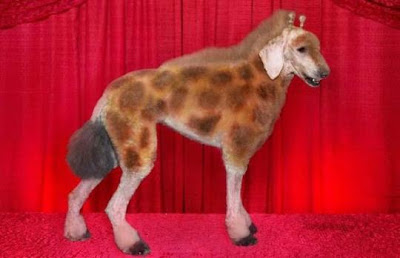 Once again there is a paucity of news from the Indian expedition. In their defence, both Richard and Adam did say that they were more likely to be able to contact us during the second half of the trip. In the meantime, Oliver is continuing his excellent job of trawling the Indian subcontinent for mysteries to write about....
Posted by Jon Downes at 11:52 AM No comments:

On this day in 1912 the bodies of Scott, Wilson and Bowers of the ill-fated Terra Nova Expedition were discovered along with Scott’s diary.

Here's a great clip from the Doctor Who episode 'Human Nature' with a cricket ball in it:
http://www.youtube.com/watch?v=56j3Y6uYX7w
Posted by Jon Downes at 11:40 AM No comments:

AT LAST THERE IS NEWS FROM THE INDIAN EXPEDITION 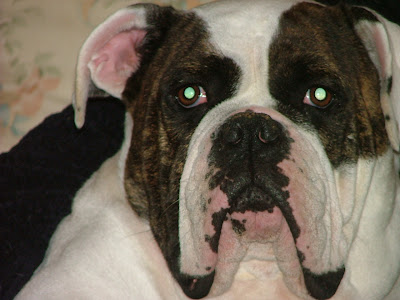 Although we have only had her a week, Prudence has become firmly attached to us, and we are incredibly fond of her.

However, there is a problem. There have started to be small amounts of blood in her urine, and although this is most likely to be a urinary tract infection, after what happened to Biggles we are very paranoid about doggy illnesses at the moment.

Keep her (and us) in your thoughts and prayers to whichever deity you believe in, and we shall keep you posted....
Posted by Jon Downes at 11:23 AM 4 comments: 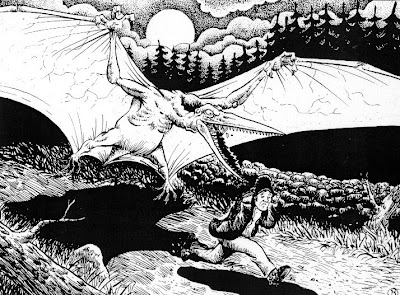 http://karlshuker.blogspot.com/2010/11/night-ravens-or-whats-in-name.html
Posted by Jon Downes at 11:01 AM No comments: