DALE DRINNON: NEW REPLY on CFZ Reprint: "Patty" Is Not A Man In A Suit

http://frontiersofzoology.blogspot.com/2011/09/new-reply-on-cfz-reprint-patty-is-not.html
Posted by Jon Downes at 5:50 PM No comments: 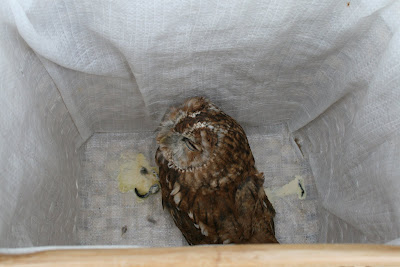 While travelling down the B439 from Stratford upon Avon to Bidford on Avon last night my family and I came across, or rather were hit by, a beautiful Tawny Owl. It had hit our car with some force, causing it to be very disorientated and highly shocked. So we picked it up from the roadside and took it home overnight (As Spring has now gone) with the purpose of checking it in the morning to see how it was. When morning came we peered into the basket we had left it in (see photo) and could clearly see that it was alert and ready to go, If it hadn't been we would have taken it to a local animal sanctuary were I used to work but luckily all was well. My father who is an Ornithologist with fifty years experience checked the Owl over and declared that it hadn't broken any bones and it was a small male. I saw it appropriate to name him Lucky while we had him with us as he certainly was very lucky indeed. 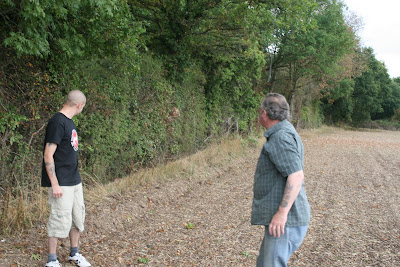 Lucky's re - release - Anyway at Ten Thirty this morning we re - released lucky, we did contemplate waiting until the following evening as obviously Owls are nocturnal and would rather fly at night but we believe that keeping it in the box for a further Twelve hours would have caused more undue stress than its temporary diurnal flightpath towards the safety of some nearby oak trees. So as we slowly opened the door on the box, Lucky seeing the escape route, came crashing out like a Bat out a Hell - well like an Owl out a box anyway and can be just about seen flying away in the other photograph.

A similar incident happened only a week ago with a juvenile Green Woodpecker which was also re - released back into the wild, like Lucky, with nothing more than a headache.

An Owl was seen by a friend of mine only two months ago flighting at great heights and was heard calling in a very unusual manner = described (by my friend) like the screams of a terrified child, I believe this was also a likely Tawny Owl.

http://hauntedskies.blogspot.com/2011/09/ufo-talk-at-woodbridge-community-hall.html
Posted by Jon Downes at 1:08 PM No comments:

On this day in 1898 Hannibal Goodwin patented celluloid film.
And now the news:

It's the cow of the sea:
http://www.weebls-stuff.com/songs/dugong/
Posted by Jon Downes at 1:07 PM No comments:

http://karlshuker.blogspot.com/2011/09/newly-published-review-of-my-alien-zoo.html
Posted by Jon Downes at 12:24 PM No comments:

http://cfz-nz.blogspot.com/2011/09/happy-feet-stops-transmitting.html
Posted by Jon Downes at 12:21 PM No comments:

DALE DRINNON: More connections between Maurya India and the Mayans

After Midnight and I finally got the second blog of the day to about what I wanted it to be:

At the Frontiers of Zoology:
http://frontiers-of-anthropology.blogspot.com/2011/09/not-by-alexanders-fleet.html

More connections between Maurya India and the Mayans, and the other high-culture areas of the New World as well.
Posted by Jon Downes at 11:26 AM No comments: