Posted by Unknown at 3:56 PM No comments:


A lack of feathers won't be a problem for these two chickens this winter after their owner kitted them out in woolly jumpers to keep them warm. 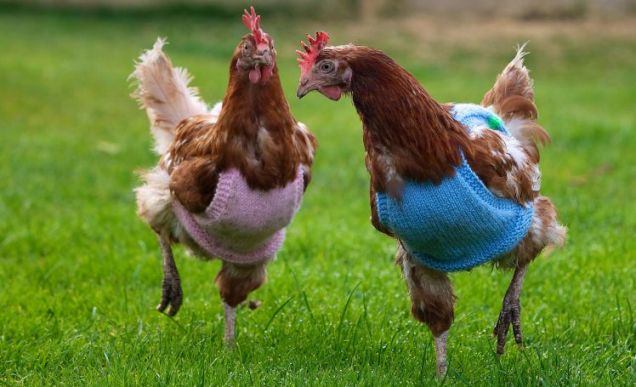 Sage and Onion were dressed in knitted jumpers after losing their feathers (Picture: SWNS)
Best of hens Sage and Onion were kept in such poor conditions on a battery farm that they lost all of their feathers.
However the duo can now look forward to a warm future together after being rescued by caring new owner Sue Christy and are now well on the way to a recovery.
'I did try making the jumpers but it was a complete disaster,' said the Gloucester resident.
'Surprisingly I managed to find some on eBay, it's amazing what you can find on there.
'They seem very happy with their jumpers, I think they like being warm again. They seem happy enough.'
The featherless pair would have struggled to cope with the wintery conditions after being neglected by their previous owners when they stopped laying eggs regularly.
VIDEO: Chickens get knitted jumpers to keep them warm

http://eclectariumshuker.blogspot.co.uk/2012/10/is-divination-more-than-just-smoke-and.html
Posted by Jon Downes at 11:50 AM No comments:

Wildlife officials say the possibility of bigfoot existing in East Texas is extremely remote. The key element, is tangible evidence.
"My opinion is they're not all animal as most people think they are, they're not human as we know it either," says the Dallas area photographer who claims he caught bigfoot on film.
The man is convinced that its proof bigfoot exists in East Texas.
"I've been out there I've seen them," he says.
Researchers think his photographs do show something is there.
"You have something interesting and very compelling, in an area that there's been known activity, its not definitive," says Mike Hall of Texla Cryptozoological Research.
But there are some down to earth scientific questions that need to be answered. What does a 4-to-500 pound , 8-to-9 foot animal need as far as habitat , food,  and water? And how can something that big simply vanish in the East Texas woods?"
Ag agent Hugh Soape , viewed the video , and has questions

One of three continuing discussions on facebook arising from recent FOZ posts, but the first one from which there have been substantial results:
http://frontiersofzoology.blogspot.com/2012/10/giant-skulls-discussions-continuing.html
And Here is today's Cedar and Willow link:
http://cedar-and-willow.blogspot.com/2012/10/more-on-batman-and-chickie-silver-st.html

Our new intern arrived last night. She is a delightful young lady from Yorkshire, and I have an idea that I shall tease her unmercifully all week. She and Dave B-P came to dinner last night, but sadly Jess H was ill or we should have had a full compliment. Hopefully she will be with us this afternoon, cos we miss her and its not the same without her. I think that the week ahead is looking to be rather an impressive one..

The Gonzo Daily is - as the name implies - a daily online magazine (mostly) about artists connected to the Gonzo Multimedia group of companies. But it also has other stuff as and when the editor feels like it. The Editor is an old hippy of 53 who - together with his orange cat - puts it all together from a converted potato shed in a tumbledown cottage deep in rural Devon. He is ably assisted by his lovely wife Corinna, his bulldog/boxer Prudence, and a motley collection of social malcontents. Plus.. did we mention the orange cat?
Posted by Jon Downes at 10:49 AM No comments:

On this day in 1984 American surgeons and scientists transplanted a baboons's heart into a baby human for the first time. Sadly, though it initially appeared to be a success the baby died in 21 days from a kidney infection.
And now the news:


Nothing to do with today's O.T.D. But a good tune:
http://www.youtube.com/watch?v=6pB9zuS4Ay8