I have just been offered a trio of these wonderful aquatic salamanders but because we are conserving CFZ funds for our new building project we can't take them. It is heartbreaking but I really cannot justify spending £150 on these delightful creatures just now....

Email ThisBlogThis!Share to TwitterShare to FacebookShare to Pinterest
Labels: salamander

WHERE HAS CORINNA BEEN?

The more eagle-eyed amongst you will have noticed that my lovely wife has been missing from the blogosphere for the last few weeks. Well, here's why....
Posted by Jon Downes at 11:36 AM No comments: 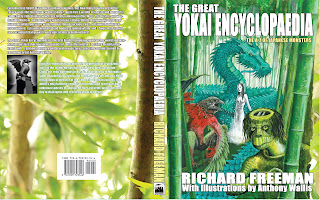 JAPANESE MONSTER BOOK TURNS THE WEIRDOMETER UP TO ‘11’.

Sick of werewolves, tired of zombies, will you scream if you read ay more about vampires? Well Richard Freeman’s new book ‘The Great Yokai Encyclopaedia; An A to Z of Japanese Monsters’ is the perfect antidote. No one could accuse Japanese folklore or Japanese monsters of being run of the mill.

With early public literacy, access to the printing press and hundreds of years of Shinto, Buddhist, and Taoist cultural cross pollinations, the stage is said for some truly insane legendary beasts that make the creations of H.P.Lovecraft look as wholesome as the Care Bears.

Collectively known as Yokai, the ghosts and monsters from the Land of the Rising Sun are so strange that to a western mind they are like having a mental enema. The book lists a cavalcade of the weirdest monsters in the world. Gant man eating sea cucumbers that grow from girl's knickers, pervert water goblins, grave robbing giant rabbits, dragons that impregnate women, flaming pigs that steal human genitals, monsters that eat your hair, monsters that lick the ceiling, monsters that lick poorly kept public toilets, cats that animate dead bodies, dogs with shape shifting testicles, blood sucking weasels and un-dead whales, it's all in here and much, much more!
Were did they come from? Why did people believe in them? Why are they so damn strange? Cold any of them have a distorted basis in reality? Could some of them still exist today?

‘The Great Yokai Encyclopaedia; An A to Z of Japanese Monsters’ is available from CFZ Books at www.cfz.org.uk
Richard Freeman is available for interview.

* The Centre for Fortean Zoology [CFZ] is the world’s largest mystery animal research organisation. It was founded in 1992 by British author Jonathan Downes and is a non-profit making (not for profit) organisation registered with H.M. Stamp Office.
* Life-president of the CFZ is Colonel John Blashford-Snell OBE, best known for his groundbreaking youth work organising the ‘Operation Drake’ and ‘Operation Raleigh’ expeditions in the 1970s and 1980s.
* CFZ Director Jonathan Downes is the author and/or editor of over 20 books. His latest book is Island of Paradise, his first hand account of two expeditions to the Caribbean island of Puerto Rico in search of the grotesque vampiric chupacabra.
* The CFZ have carried out expeditions across the world including Russia, Ireland, Sumatra, Mongolia, Guyana, Gambia, Texas, Mexico, Thailand, Puerto Rico, Illinois, Loch Ness, and Loch Morar.
* CFZ Press are the world’s largest publishers of books on mystery animals. They also publish Animals & Men, the world’s only cryptozoology magazine, and The Amateur Naturalist, Britain’s only dedicated magazine on the subject.
* The CFZ produce their own full-length documentaries through their media division called CFZtv www.cfztv.org. One of their films Lair of the Red Worm which was released in early 2007 and documents their 2005 Mongolia expedition has now been seen by nearly 82,000 people.
* The CFZ is based in Jon Downes’ old family home in rural North Devon which he shares with his wife Corinna (53). It is also home to various members of the CFZ’s permanent directorate and a collection of exotic animals.
* Jonathan Downes presents a monthly web TV show called On the Track (available through YouTube) which covers cryptozoology and work of the CFZ.
* The CFZ are opening a Visitor Centre and Museum in Woolsery, North Devon.
* Following their successful partnership with Capcom http://www.capcom.com/ on the 2007 Guyana expedition, the CFZ are looking for more commercial sponsors.
Posted by Jon Downes at 11:27 AM No comments: 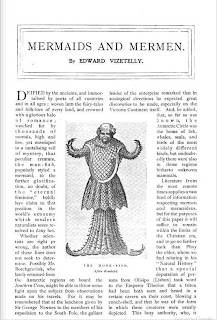 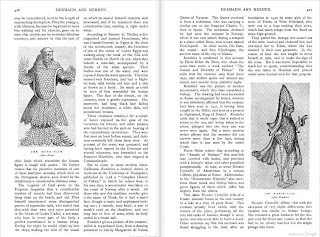 Robert Schneck wrote: This is an article called 'Mermaids and Mermen' by Edward VIzetelly, that appeared in The English Illustrated Magazine No. 209, February 1901. Some of the accounts are familiar; others are not, and it's well illustrated. Hope you can use it.

We can indeed run it Robert, and will do it as a series. First part today....

Purrlgurrl’s ideas as to how my UFO picture was achieved were pretty accurate; and If only I could really do as Terry the censor suggests -- it would make my special FX work a lot easier! But the UFO was made using materials from Wilkinsons--kitche 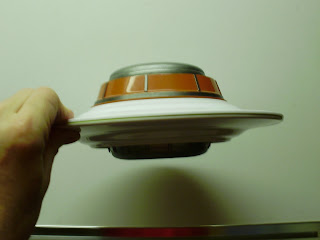 n and garden dept--basically some plastic plates and pots stuck together, and was actually a left-over model from an article that I wrote for Fortean Times in 2005, concerning the supposedly ‘fake’ photos taken by alien contactee Billy Meier. Here’s a link to the article for those who might be interested.

The picture was created by taking a picture of the saucer hanging on a line in my garden, then making a cut-out of the image from the processed photo. Then after taking a photo of a suitable background near where I live, I placed the cut-out UFO onto the photo of the background and simply re-photographed the whole thing. If you try to get the lighting right, you can get quite a realistic illusion, and of course, there are no wires to be seen.

This next section should really come under the heading of “Reasons that I’m the sane and balanced individual that you see before you“, but while it’s neither gruesome or warped in any way, it is part of my childhood influences, so here we are. 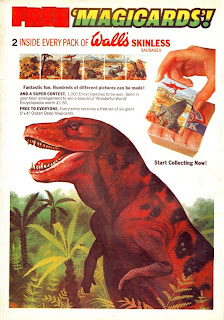 Being a full-time dino-nut, I’ve built up a fairly gigantic collection of various prehistoric paraphernalia. I always loved to collect picture-cards and post cards of dinosaurs from museums and libraries, and when this offer appeared in several comics in the 1970’s it was one I couldn’t refuse. It was basically a marketing ploy on the part of Walls to induce the children of Britain to consume heroic quantities of skinless sausages, in return for which they would be granted with - attached to the sausage packets - a set of dinosaur cards, heavily ‘inspired’ by the paintings of Charles Knight - in fact, those of a less charitable disposition might go so far as to claim outright plagiarism - but of course I would never do that….
The really cool thing about these particular pictures, was that the backgrounds had been painted in such a way, that however you placed them together, they would match, so you could create several different scenes. I managed to collect them all, due to the selfless efforts of my family, who became sausage enthusiasts for a few weeks - to be honest, they were very nice, and my dad was certainly a fan - and here they are. Does anyone else remember them? 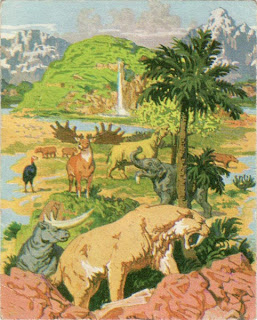 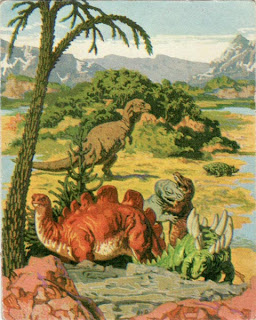 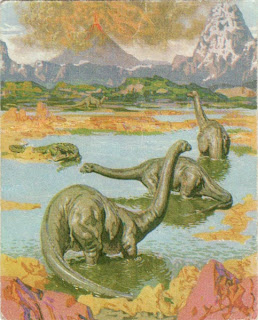 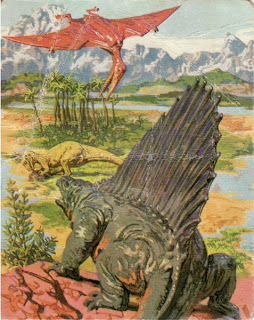 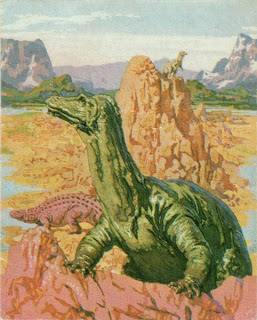 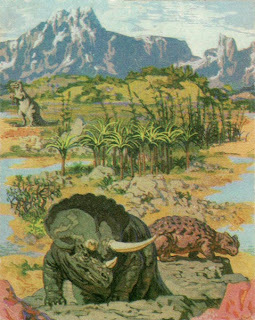 Isle of Wight mystery cat from 1940

Paul Cropper has just sent this vintage press cutting from 1940 no less. It tells the story of how:

"Mrs. G. Russell, of Parkhurst, near Newport, Isles of Wight, came forward with evidence about the mysterious "monster" of Ryde, which leaves huge footprints on the ground. The monster, destribed as a animal with a head like a lion and long, black hair, is reported to have been seen twice in recent weeks, and was one persued by an armed search pearty. According to Mrs. Russell, the "monster" is no stranger to the thickly wooded country between Ryde and Newport. She claims to have seen it as long ago as last September.

Ms. Russell said: "I was crossing the Bartin Manor Estate, near East Cowes, when I saw the animal peering at me from the under growth. "It was as big as an Alsatian dog and was covered with thick black hair and had a long, thin tail.. As I watched the animal padded off down the path, moving more like a cat than a dog. I told my story to my husband and neighbours. They all ridiculed it...."

On this day in 1919 the first man to reach the summit of Mount Everest and complete a successful decent, Edmond Hillary, was born.
And now, the news:

http://www.youtube.com/watch?v=chrP2MukhIQ
Posted by Jon Downes at 10:28 AM No comments: