On 31st of October the CFZ 2010 expedition leaves England. They will be exploring the Garo Hills in Northern India in search of the mande-burung or Indian yeti. The five-man team consists of team leader Adam Davies, Dr Chris Clark, Dave Archer, field naturalist John McGowan, and cryptozoologist Richard Freeman.

The creatures are described as being up to ten feet tall, with predominantly black hair. Most importantly, they are said to walk upright, like a man. Walking apes have been reported in the area for many years. These descriptions sound almost identical to those reported in neighbouring Bhutan and Tibet. Witnesses report that the mande-burung, which translates as forest man, is most often seen in the area in November.

The Garo Hills are a heavily forested and poorly explored area in Meghalaya state in the cool northern highlands of India. The area is internationally renowned for its wildlife, which includes tigers, bears, elephants and Indian rhino and clouded leopards.

The Indian team will be led by Dipu Marek, a local expert who has been on the trail of the Indian yeti for a number of years and has found both its nests and 19inch long `footprints` on previous occasions. The expedition team has also arranged to interview eyewitnesses who have seen the Mande-Burung.

Camera traps will be set up in sighting areas in the hope of catching one of the creatures on film.

The Mande-Burung may be a surviving form of a giant ape known from its fossilised teeth and jaw bones, called Gigantopithecus blacki, which lived in the Pleistocene epoch around three hundred thousand years ago. This creature is of course extinct. However, much contemporary fauna such as the giant panda, the Asian tapir and the Asian elephant that lived alongside the monster ape, still survive today. It is thought by many that Gigantopithecus also survives in the impenetrable jungles and mountains of Asia. Its closest known relatives are the Orangutans of Sumatra and Borneo.

Last year the team, who investigate mystery animals all over the world, travelled to Sumatra in search of a small, bipedal ape known as the orang pendek. Dave Archer and local guide Sahar Didmus saw the creature and the group brought back hair that was later analysed by Dr Lars Thomas at the University of Copenhagen. The DNA proved to be similar to an orangutan's, an animal not found in that part of Sumatra.
Posted by Jon Downes at 11:54 AM 1 comment: 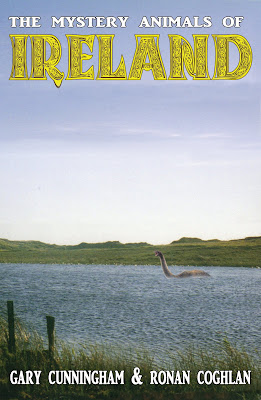 Many thanks to Glen Vaudrey who pointed out that I got the coding wrong on this and that the `Buy Now` button didn't work properly.

I have fixed it, and it does now! 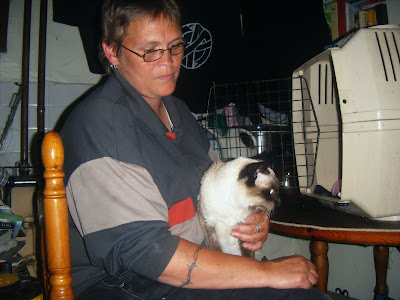 On Wednesday we lost another member of the extended family. In 1989 my mother acquired a small Siamese kitten from our housekeeper Helen. She was named Tikki and stayed with my parents until my mother's death in 2002. My father found himself unable to deal with her and Helen took her back.

Tikki was put to sleep yesterday. She would have been 22 on Christmas Day.

Also admitted to the great cattery and kennel in the sky on Wednesday was Tigger, for 12 years the pet of Darren and Toni Naish and family. Rest in Peace little fellows.

The picture, by the way, is Helen, not my mother. Barbed wire tattoos and anarchopunk T-Shirts hanging up to dry were not de rigeur in my Mama's day more's the pity..
Posted by Jon Downes at 11:31 AM No comments:

Zooform phenomena really is a surreal void of monsters, long ago cast from the Ark and projected onto our terrain like grotesque holograms. We never understand them, never catch them, and yet continually lump them into the cryptozoology bracket despite their clear phantasmal characteristics.

Take for example the terror of the four-legged football, which prowled, for such a short time, the Villa San Rafael area of Chile. On January 12th 2002 at 11.45 pm two teenagers, named Jean and Nelson, of Calama, had a bizarre encounter after Jean’s pet snake had escaped its enclosure. Both boys searched for the missing reptile outside but were hesitant to do so as half an hour earlier they had been spooked by the unsettled growls of the pet dogs. Whilst searching for the snake they saw a creature, which at first they took to be s stray dog and so to deter it, they threw stones at it.

Instead of moving away from them the creature began to approach, hopping like a rabbit, and then standing to face them on its hind legs. The two witnesses noted an almost electrical surge, which they felt strongly in their stomachs. The beast had an awkward gait and resembled a “rugby ball with legs”.

Jean backed away from the creature but Nelson felt compelled to move towards it and once within two metres of the animal he noticed it gave off a luminosity. Nelson stated that the creature had a head like a dog, a flat nose, red, slanted eyes, and large, flat ears. Nelson also claimed that a voice came into his head and whispered, “Don’t stare, just run away”.

The arms of the creature were short and both hands had three fingers, as did the rear ‘feet’ which also seemed to be webbed. The creature was covered in short, grey hair and the spine of the monster was bristled. The animal had a short tail with a white tip.

Both witnesses eventually fled the area.

Upon looking into the report I noticed that some researchers had connected with account with the many encounters with the ‘goatsucker’ or chupacabra, which has littered South American folklore for a few decades. However, what this encounter proved to me was how one man’s goatsucker is another man’s ‘something else.’

Chilean folklore is rife with legends of hair-covered troll-like monsters, as well as winged dogs and we are all too quick to give them a label, in the same way Mothman, Owlman, Jersey Devil were created. Of course the legend of the ‘four-legged rugby ball’ doesn’t sound as dramatic or as frightening as the already mentioned comic-book anti-heroes.
Posted by Jon Downes at 11:25 AM 2 comments:

REDFERN IS CHASING THE TEXAS CHUPACABRAS

I'll be honest with you, this is one of those days where I haven't yet found anything Fortean that happened so if you know anything that did please show your cleverness by sending in a comment in reply to today's YNT, anyone who does will get something quite special... In the meantime I can't leave you without something interesting you can share with your co-workers or friends so I'll give you a random fact to tide you over:
“Cabbaged” and “fabaceae” are the longest words you can play on a musical instrument.
And now, the news:

This should both amuse and excite:
The Great Salmon Run
Posted by Jon Downes at 11:23 AM No comments: