Virginia Wade; Harry of "Harry and the Hendersons"
Forget blood and fangs. Move over, ball gags and bullwhips. Now it’s all about Bigfoot’s big dick.
At least, that was the message last week amid a media frenzy over the discovery that sasquatch erotica is not only a thing that exists in the world, but a thing that has made Virginia Wade, a self-publishing “stay-at-home mother,” a whole lot of dough. The “Twilight” and “Fifty Shades” comparisons practically write themselves.
For some time, Wade, a New York Times bestseller, was bringing in $30,000 a month from sales of her e-book series “Cum For Bigfoot,” which begins with teenage girls being kidnapped by “an ape-like creature” intent on “procreating with them.” Contrary to last week’s hype over sasquatch smut, though, Wade was  in fact planning to end the series because Amazon’s crackdowns on erotica has killed sales. This recent media attention just might change her mind, though.
I called Wade, who is in her 40s, at her home in Colorado to talk about “monster porn,” the sexual appeal of dangerous men (and beasts) and what it was like having her father edit her erotica. But, more important, to ask her the pressing question: What kind of lover is Bigfoot, anyway?
Read on...
Posted by Jon Downes at 6:12 PM No comments:

Posted by Jon Downes at 3:57 PM No comments:

www.gonzomultimedia.co.uk/about.html
THE ONLY WAY I GET MY KICKS
I really dislike The Daily Mail. Their level of journalistic integrity, does - I believe - leave a lot to be desired. Unfortunately a lot of the twaddle they write is on subjects that I know nothing about so I can't really comment. However, today they proudly proclaim that "Britain's first wild beaver for 500 years has been caught on camera for a second time - but this time gnawing on a tree in the dead of night", and then promptly contradicting it in the headline which proclaims that there have not been beavers in the UK for 800 years. None of these assertions are true. If I remember correctly, (and I can't be bothered to find my copy of Harting's 'British Animals Extinct Within Historic Times') the last wild ones were trapped at Loch Ness in the year of the Spanish Armada, which actually means that they have been missing from our landscape for 425 years, not 500, or 800. Except they haven't: One of a pair was shot in Essex in (I think) the 1970s, and there were at least two beavers on the River Axe from the 80s and 90s. Whether they are the remnants of the original population (which I doubt, but this is what the paper is implying) or were the result of deliberate or accidental introduction I don't know.
But like the wild boar before it, the beaver does seem to be on its way back, which can only be a good thing. And it gives me a chance to make a 'Pop Will Eat Itself' joke which is always good. And today we bought a new car, so I can't resist!
One good thing that's on my side
It's a big bad car, it's out of sight, beaver patrol
Concert review: Rick Wakeman – a piano recital mixed with comedy
http://gonzo-multimedia.blogspot.com/2014/01/concert-review-rick-wakeman-piano.html
Yes Posts ‘In the Studio’ Images, Begin Working on new album
http://gonzo-multimedia.blogspot.com/2014/01/yes-posts-in-studio-images-begin.html
THOM THE WORLD POET: The Daily Poem
http://gonzo-multimedia.blogspot.com/2014/01/thom-world-poet-daily-poem_23.html
THE GONZO TRACK OF THE DAY: As the Years Go Passing by
http://gonzo-multimedia.blogspot.com/2014/01/the-gonzo-track-of-day-as-years-go.html
BRAND X Live At Roxy: Belgium review (translated)
http://gonzo-multimedia.blogspot.com/2014/01/brand-x-live-at-roxy-belgium-review.html
VANGELIS: US review
http://gonzo-multimedia.blogspot.com/2014/01/vangelis-us-review_22.html
*  The Gonzo Daily is a two way process. If you have any news or want to write for us, please contact me at  jon@eclipse.co.uk. If you are an artist and want to showcase your work, or even just say hello please write to me at gonzo@cfz.org.uk. Please copy, paste and spread the word about this magazine as widely as possible. We need people to read us in order to grow, and as soon as it is viable we shall be invading more traditional magaziney areas. Join in the fun, spread the word, and maybe if we all chant loud enough we CAN stop it raining. See you tomorrow... 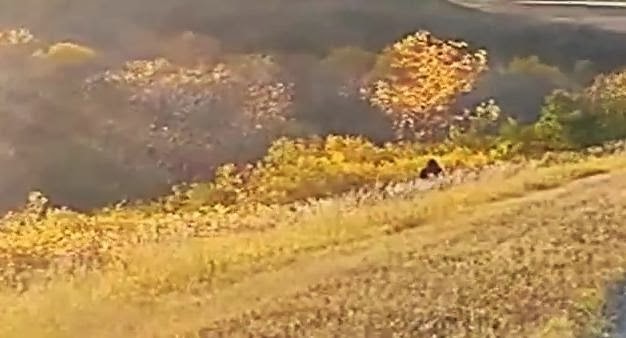 There's so many things "right" about this footage. #1) It's really old -- like VHS quality old. #2) Back story is damn good. #3) We have no idea where or who it came from. #4) It's a good footage filmed in a place you've never heard of before (Saskatchewan in Canada) and it's going to get a ton of views!

Today is Bounty Day in the Pitcairn Islands. Curiously, Bounty Day is nothing to do with the ship The Bounty, which the crew who were later to settle the islands mutinied on, but is actually a celebration of the famous coconut chocolate bar. It is said that when the islanders were starving, a crate of milk-choc Bounties had washed up on a beach on Norfolk Island and this saved the colony. The islanders found out about the dark choc variety in 1989 and out of sheer excitement, a law was passed that forbade the consumption of any other foodstuff, a law the islanders have never broken apart from one unfortunate incident when an old man was caught eating a choc dip.

I bet you're all considering buying a Bounty today, now you've been reminded that they are a thing:
http://www.youtube.com/watch?v=0-gHUDd4FyA
Posted by Jon Downes at 10:15 AM No comments: