The next Midland charity auction in Redditch is Sunday, December 5th 2010. Only 3 weeks to go & many are starting to request auction letters. Last year's December do raised £755·74 & was well attended. Signs are this one will be similar.

This year the viewing rack is extended from 90 to 150 bags to give those viewing a better chance of seeing the fish. A new PA (Public address) system will be installed with radio microphones, which worked really well at the last Cichlid auction. Dave has generously volunteered to set his gear up for this do. It will be a great improvement. Currently this venue is now home to 5 auctions a year ( 2 x charity - 2 x Cichlid Association - 1 x BKA/charity ).

The new BKA auction in March will be a great do & 50% of money made on the day will go to charity. Personally, I'm looking forward to an old-style Killie-only auction. I'm hoping those who have voiced an opinion for this will support it!!

With Remembrance Sunday yesterday perhaps it's a good time to say the charity donations to the 'Help for Heroes' fund amounted to over £500 from the last 2 auctions. Personally, I am over the moon that we can all come together a couple of times a year & sell a few fish to help support our 3 charity causes, including the Air Ambulance & MacMillans Cancer fund.

On this note I would say that we have had to tighten the admission arrangements & the bottom door will be shut. Only the main entrance will be open. Bright stickers will be issued to those who pay the £2 admission fee. Those not wearing it will be asked to prove payment or leave, basically. I'm sure everyone will understand we are a charity fundraising event. Last June those that didn't pay cost us the profits from 2 racks of fish, which isn't going to happen again.

It's difficult to get everything together on the day where everything happens in a very short time. We are all volunteers to this event & God bless everyone who helps out on the day.

Breakfasts are available so anyone arriving early should pre-book with me via the webpage to ensure they get an early feed.

Please see the website - http://www.ta-aquaculture.co.uk/ & click link to auction page in top left yellow box.
Posted by Jon Downes at 11:25 AM No comments:

OLL LEWIS: The pitfalls of fish-breeding 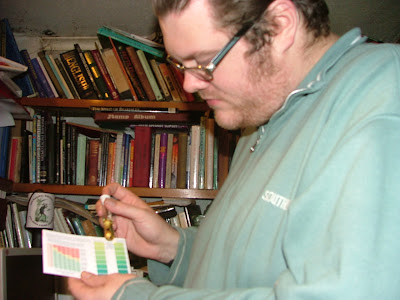 If you regularly follow the blog you'll know that we have quite a few species of livebearing fish at the CFZ. Most of these species have successfully bred successfully reared to adulthood. However, breeding is not without its pitfalls.

This summer after Jon and Max went to a livebearer auction we had several new additions to our fish collection, including 2 pairs of Scolichthys greenwayi. Early signs were very encouraging when they released a cloud of tiny babies only about a fortnight after they had been introduced to their tank. Several more small birthing events followed over the course of the summer and the fish took to hiding amongst the weeds.

However, I began to become concerned that there did not appear to be many juveniles venturing outside of the weeds and various caves and tunnels. The answer to why this may be became apparent when, upon my removing some of the weed, a juvenile swam out. It was rather deformed. T 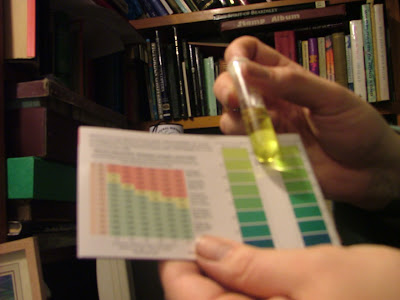 his juvenile and another had a hideous amount of twisting to their spines, taking the appearance of an 's' shape. There was certainly nothing untoward with the appearance of the adult fish (and indeed no signs of fungal infections or other health problems among the adults) but it seemed that the very few surviving juveniles all had this condition.

Each week I test the water chemistry of all the tanks at the CFZ for chlorine, potassium hardness, general hardness, and nitrites, and all have been normal and well within the conditions favoured by the fish. Just to be on the safe side we recently bought an ammonia testing kit as well. The tests showed 0ppm of ammonia in the water, which is to be expected considering the tank is long established, has a pH of 6.8 and I have always played close attention to keeping the nitrites and nitrates around the 0 mark too.

The twisted spines are likely of a genetic cause, genetic problems being all too common in the fish-breeding trade. The problem stems from too much inbreeding leading to a small gene pool, which means genetic problems can become magnified within the population. Small fish are often prolific breeders and will produce lots of young, which is fine when they live in a large river and it is likely that there will be lots of other fish with different genetic lineages just down the river to breed with, but in captivity often closely related fish will breed with each other, meaning the available genes are reduced. Often fish that look outwardly fine are selected for further breeding or sale and the 'rejects' euthanased, but a fish can easily be carrying the genes that could contribute to deformities in their offspring even if the appear to be fine. Other things exacerbate the problem and can speed up the shrinking of gene pools such as selling fish to other collectors with a much larger number of one sex than the other.

For example, if you were to attempt to breed using one male and six females you're going to reduce your gene pool very quickly indeed. I have actually seen evidence of a few scolichthys greenwayi being sold in similar ratios online so it is easy to see how the captive genetic stock can be reduced quickly. In order to counter this many of the more responsible breeders will buy in adults from other breeders but often, unless you know the full lineage of the fish, you might be just adding inbred stock.

Zoos and conservationists have been aware of the problems inbreeding causes in a population for a long time and accurate stud books are kept for most animals to ensure that when breeding genetic diversity is maintained. Some fish breeders will keep stud books but often hobbyists and some commercial breeders will not and because of this it often becomes near impossible to keep a studbook only a few generations after a particular species has been introduced to the pet trade.
Posted by Jon Downes at 11:13 AM 1 comment:

MATT OSBORNE DISCOVERS THAT PRUDENCE IS A VERY SOPPY DOG 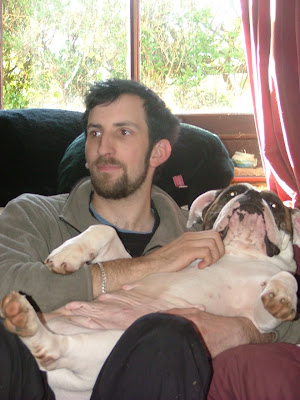 There really is not much that one can add to this.

A dog's head got stuck in a fire hydrant in Brazil. This is a video of attempts to rescue it: http://www.youtube.com/watch?v=v4A002uSZO0
Posted by Jon Downes at 11:05 AM No comments:

Today is the feast day of St Malo. Malo is reported to have seen a Kraken on two occasions. It was likely actually a phantom island.
And now, the news:

A leatherback hatchling making his way to sea:
http://www.youtube.com/watch?v=MWtGF6JTK5g
Posted by Jon Downes at 11:04 AM No comments: