RICHARD HAS MADE IT INTO 'THE SUN' (Page Three, no less) 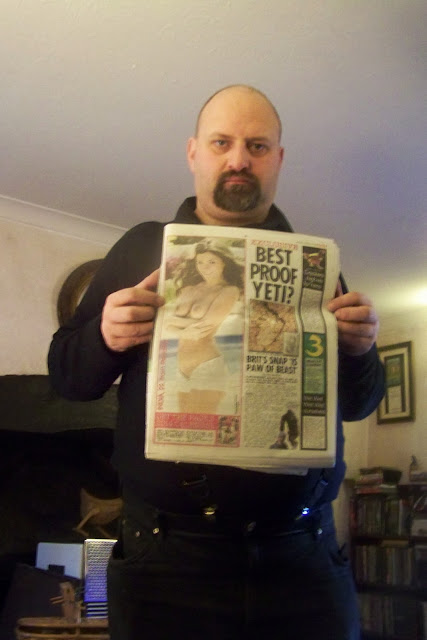 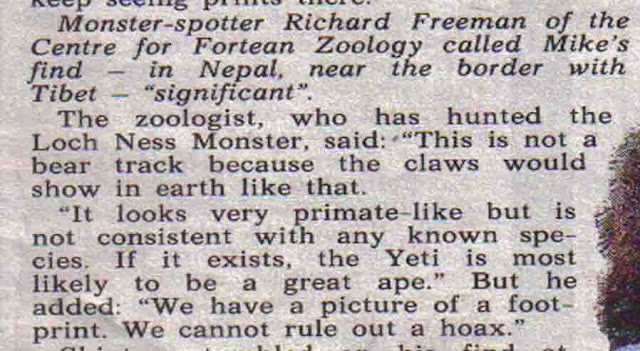 Mike Rees snapped the 'Yeti footprint' while climbing Everest [SWNS]
Intrepid Mike Rees, 73, innocently took the picture while trekking in the Himalayas after his wife spotted the imprint and pointed it out as "something interesting".
But it was not until he got home and began to read books on Everest that he noticed the footprint exactly matched one discovered by a team of explorers six decades ago.
It is the same size and shape as the one pictured in 1951 and was found in the same remote region.
The retired computer engineer has gone public with his evidence after boffins last week claimed to have solved the mystery of the Yeti.
Mike, who has been trekking in Nepal four times, said: "It didn't really register with us at all what we had taken a picture of, my wife just thought it was something interesting.
"It wasn't until we got home and developed the film that we realised what it could be.
"We got books on Everest and they all contained the stories about the Yeti, the closer we looked we just thought 'wow' our photo looks exactly the same as that footprint. The 1951 footprint in comparison to the photo taken by Mike Rees [SWNS]
"I compared the two closely and it had to be the same, it's the same size and shape, there's no doubting it, it looks almost identical." Mike and wife Joyce, 69, were on their second trek to the stunning area in 2006 when they made the discovery.
They were trekking in the Khumbu region of the Himalayas, near the village of Machermo, when they spotted the footprint


Karl Shuker investigates the mystery of the missing yeti mummies.

www.gonzomultimedia.co.uk/about.html
And so another week begins. The weekend was enjoyable because Mike Davis and I were cooking on gas and finished three new songs. Meanwhile, Richard is preparing for the CFZ Australia expedition to Tasmania in a week's time. Graham is still on holiday with his mother and sister, and we still have no car. I would like to apologise to Barbara Dickson - we had planned to go as her guests to Yeovil last week to see her show, but our current transport-less state precluded this. Sad but true.
However, we are getting a hire car and travelling to Manchester on Thursday. We will be meeting up with the lovely Miss Crystal Grenade, and later going to see Peter Gabriel (hopefully visiting the skeleton of Maharajah the elephant, and The Manchester Moth in the Natural History Museum along the line). What an exciting life we live....

*  Jon Downes, the editor of all these ventures (and several others) is an old hippy of 54 who - together with his orange cat (who is currently on sick leave in Staffordshire) and two very small kittens (one of whom is also orange) - puts it all together from a converted potato shed in a tumbledown cottage deep in rural Devon, which he shares with various fish and sometimes a small Indian frog. He is ably assisted by his lovely wife Corinna, his bulldog/boxer Prudence, his elderly mother-in-law, and a motley collection of social malcontents. Plus...did we mention the orange cat?
Posted by Jon Downes at 12:59 PM No comments:

On this day in 1966 144 people (mostly primary school pupils) were killed in the Aberfan disaster. The coal board had been happily dumping huge soil tips above springs overlooking Aberfan and eventually these gave way, sending an avalanche of mining debris towards the local primary school, burying it and everyone inside. Now you could argue that the government-run coal board might have done this by accident or incompetence but the fact that Westminister went on to bill the charity set up to provide a memorial and compensation for the victims for the removal of other dangerous spoil heaps in the area (an act that has been ruled as unlawful now) shows exactly what the government and the coal board's attitude was.

A short documentary from near the time of the disaster:
http://www.britishpathe.com/video/aberfan-valley-of-sorrow