From Nick Redfern's "There's Something in the Woods...":
Apes of the Wild Frontier

From CFZ Australia:
A bit of fun for this year's CFZ Sumatra expedition
The Mystery of the Beast of Bowen (1934)

From CFZ New Zealand:
Moa Beer does its bit for wildlife

From CFZ Canada:
Why Are We Not Capturing More Cryptids?
Posted by Andrew May at 2:12 PM No comments:

CRYPTOLINKS: The Return of the Boggy Creek Monster?

I received the following correspondence on Thursday in reference to an encounter that occurred east of Texarkana, Arkansas. The sister of the witness (who lives in Florida) forwarded the account. (The writer asked that I edit for spelling if I published):

Hello Sir - My brother and his wife had a shocking event on May 5th, 2011, when they were driving home to Genoa, Arkansas, from a visit with his in-laws in Texarkana. He was driving east-bound on Tennessee Rd (County Rd. 16) at around 7:30 pm and had just gone by Mosely Rd when a creature suddenly jumped out of the trees and brush, crossed the road and blended into the thick woods. It was headed in the direction of Old Bitty Lake.

On balance, I think I prefer the companion feature: "Polish Yeti spying on bikini girl." Hubba-hubba.


http://www.michaelnewton.homestead.com/
Published with Blogger-droid v1.7.2
Posted by Jon Downes at 12:41 PM No comments:

John Palmer (35), his wife Natalie (29) and their son Caleb (5) were on a family outing to Sharp Ness Canal in Gloucestershire on a warm but overcast Saturday, 25th June, when they saw something very unusual.

Their son had misheard the name of the canal and thinking he was visiting a place called Shark Ness, was eagerly pointing out what he thought may be shark fins to his parents. Thinking it to be just the imagination of a child at play, they didn’t pay it too much mind until around half past 12 when Caleb said:

John looked over to where his son was pointing to humour him not really expecting to see anything out of the ordinary but sure enough, Caleb was right! There was a crocodile basking on the top of the water. John Palmer estimated the creatures length to be between 4 ½ and 5 feet long and Natalie estimates the creature was 6 feet in length. The head was estimated to be about 10 inches in width.

Although some sightings of crocodiles made in Britain are misidentified pike, which have similar colouration and share the crocodile’s habit of basking at or near to the surface of the water during warm days, John is adamant that the creature he saw was not a pike not only because he was able to see the animal’s feet, head and bumpy back clearly, but also because he has fished in the canal for 20 years and knows exactly what a pike looks like. When the creature swam off and submerged it did so in a manner that reminded John of the way newts swim rather than any fish.

John was quite concerned as he had seen the creature very near to the rowing club so he reported his sighting to the skipper there who informed John that it was not the first time this creature had been seen in the vicinity and that a similar beast had also been seen by a gate keeper further up the canal. Several years ago a bridge keeper named Richard Lacey saw a crocodile near Steller’s Bridge. This may be the sighting the skipper alluded to, which was investigated by Andy Stephens on behalf of the CFZ. Andy’s investigation can be found here: http://www.cfz.org.uk/expeditions/03croc/gcroc.htm
Published with Blogger-droid v1.7.2
Posted by Jon Downes at 12:19 PM No comments:

On this day in 1995 the Aum Shinrikyo religious cult, which drew inspiration from The Foundation Trilogy amongst other things, unleashed a gas attack on the Tokyo subway killing 12 people.

OLL LEWIS: The Caecilian Mafia Adds To Its Ranks 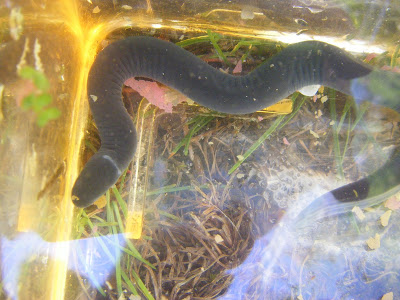 If you were reading the blog yesterday you probably read about the stillborn caecilian I found yesterday. Well, as I predicted in that blog there is a part two to that story and this time it has a much happier ending.

This morning (which I should mention is Sunday morning as you’ll be reading this at a later date than the one I’m writing it on) Helios Seven and I were doing the animal round when I decided to check the caecilian tank to see if there were any more babies present in addition to the stillborn one I found yesterday. Sure enough, I spied a discarded yolk sack dangling from a plant.

This meant that there was definitely at least one more baby caecilian in the tank now and that it had been born alive in order for it to remove the yolk sack; indeed, it was very likely it would still be alive now and having got through the first difficult hours, be likely to live a long a fruitful life.

“Well,” I said to Seven, “It looks like I have managed to get caecilians to successfully breed, what do you think about that?”
“Mew.” Replied the cat in an uninterested manner as the comment hadn’t mentioned anything about feeding her.

I then looked out a faunarium (other fauna boxes are available) and put some warm water in it from the tank and looked for the baby so that I could put it in the small plastic tank for a few minutes to inspect and photograph it. And, yes: there it was.

I then showed Jon our new arrival, and he was considerably more impressed than the cat and is a happy bunny indeed. There is also the possibility that there are still yet more babies on the way as the female still looks like she may have more babies inside her. As caecilians are no longer imported for the pet trade the more that are captive-bred in the UK the better as their keepers will be able to exchange some offspring with other keepers to improve genetic diversity and stop captive populations turning into feeble and deformed specimens from in-breeding. Of course with only one baby at present we are a long way off from being able to do any swaps to improve future genetic diversity of captive caecilians but hopefully in the future this will be a possibility.
Posted by Jon Downes at 12:04 PM No comments:

Some Suggestions Concerning the Lake Monster Known as "Ponik":
http://frontiersofzoology.blogspot.com/2011/06/ponik-of-pohenegamook-mocking-lake.html

And Some Comments on Several Miscellaneous Lake Monsters:
http://frontiersofzoology.blogspot.com/2011/06/lake-monster-potpourri.html
Posted by Jon Downes at 11:57 AM No comments: