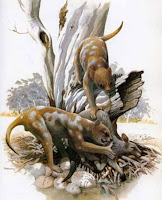 Posted by Andrew May at 1:37 PM No comments:

The following newspaper article has been intriguing me for quite a long time since I first came across it a few weeks ago. When I first mentioned it in conjunction with Flying Snake magazine on the Wild About Britain Forum at about the same time I was rounded upon as if I were a bounder, a cad, a reprobate. But behold!

The extract is from the Manchester City News in March or April 1888. There is no actual date on the cutting but it is next to three cuttings from those dates.

A MYSTERY ABOUT BATS

The torpidity in which bats remain through the winter season in the temperate and colder climates is well known, and in common with other animals undergoing the same suspension of powers they have their histories of long imprisonments. The following curious instances may serve to corroborate each other. A woodman engaged in splitting timber for rail posts in the woods close by the lake of Haming, belonging to Mr Pringle in Selkirkshire, discovered in the centre of a large wild cherry tree a living bat of a bright scarlet colour, which, as soon as it was relieved from its entombment, took to its wings and escaped. The recess in the tree was only just large enough to contain the animal; but all around the wood was perfectly sound, solid and free from any opening through which the atmospheric air could reach the air could reach the bat. A man while occupied in splitting timber near Kelsall, Cheshire, discovered many years ago in the centre of a large pear tree a living bat of a bright scarlet colour, which he foolishly suffered to escape from fear, being fully persuaded that it was not a being of this world. This tree also presented a small cavity in the centre where the bat was enclosed, but was perfectly sound and solid on each side. The scarlet colour of these prisoners is still inexplicable. (1)

On this day in 1605 Robert Catesby’s plot to blow up the houses of Parliament was foiled. The man who was charged by Catesby with guarding the gunpowder to be used in the plot, Guy Fawkes, avoided the traditional and painful traitor’s death of being hung, drawn and quartered by jumping off the scaffold to break his neck just before the execution.
And now the news:

A bit more information on the Gunpowder Plot:
http://www.youtube.com/watch?v=7Kas_HOy3fA
Posted by Jon Downes at 1:16 PM No comments:

I have just completed two new blog postings for Frontiers of Zoology: the first one is an additional example if what was called a "Flying stingray" at the site where I got the photo:
http://frontiersofzoology.blogspot.com/2011/11/flying-stingrays-again.html

And I have some new information on the Taniwhas of New Zealand:
http://frontiersofzoology.blogspot.com/2011/11/more-on-taniwhas-new-zealand-dragons.html

PS, nobody seemed to notice the pictures on Alistair Crowley and H.P.Lovecraft on the last Cedar and Willow blog, not to mention a guest appearance of Yog-Sothoth at the end. Perhaps I should have mentioned that up front as an added attraction.

KARL SHUKER: A century for the hairy fish

Here's a post celebrating the 100-year-old discovery of an extraordinary, highly deceptive fish - Mirapinna esau, the wonder-finned hairy fish of the Azores.

http://karlshuker.blogspot.com/2011/11/mirapinna-esau-furry-fish-from-azores.html
Posted by Jon Downes at 9:36 AM No comments: