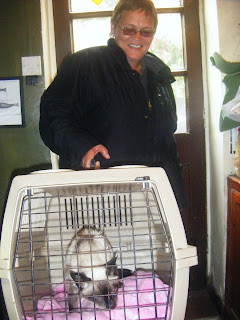 We had a VIP Visitor the other day; my mother's old Siamese cat Tikky. My mother died in March 2002 and was taken into the care of Helen, who has been housekeeper here at Myrtle Cottage for donkeys years. Tikky is now 22 and in failing health, but still as elegantly aristocratic as ever. Biggles ambled over to say hello and was greeted by a haughty Siamese hiss and a pat on the nose.

The CFZ will be making a donation towards Tikky's health care, as is only right and proper for such a venerable old lady.
Posted by Jon Downes at 12:06 PM No comments:

RICHARD FREEMAN: The Legends of Lincolnshire #1

The Castle Carlton dragon was slain by Sir Hugh Bardolfe, who fought the creature during a thunderstorm. A flash of lightning dazzled the dragon long enough for Sir Hugh to strike its one vulnerable spot, a wart on one of its legs.

Sir Hugh Bardolfe lived here in the time of Henry I. It is said in a very old court roll, that in the first year that Sir Hugh was lord of this place, ' ther reigned at a toune called Wormesgay a dragon in a lane in the field that venomed men and bestes with his air ; sir Hugh uppon a weddings day did fyght with thys dragon, and slew hym, and toke hys heade, and bayre it to the kynge, and gave it hym, and the kynge for slaying of the dragon put to his name this word dolfe, and did call hym afterwards Bardolfe ; for it was before sir Hughe Barde, and also the kynge gave hym in his armes then a dragon in sygne.

GLEN VAUDREY: If you don’t look you are unlikely to find

I was wondering the other morning why there seems not to have been that many sightings of big cats reported in the countryside, that is considering the potential numbers of animals reportedly living in the UK that have been suggested by some people. But does this lack of sightings prove that there aren’t really that many mystery moggies lucking in the fields of this green and pleasant land?

To be honest I have no idea or really any great opinion on the subject of ABCs. I know people who have sighted them and I am sure that they have indeed seen what they say they have seen. I know a few people who have been out at all hours of the day searching for proof of them and I commend their effort and wish them every success in their endeavour. I am sure that one day they will have the proof of existence that is needed.

However what actually struck me was how little of nature is actually sighted. I was talking to a few colleagues a couple of mornings back on the subjects of fox sightings and it turned out that actually none of them had ever seen a fox.. Now the area covered is largely rural with a few large industrial towns scattered about and so on the surface appears to be suitable for such sightings to occur. I know first hand from sightings that there are indeed plenty of foxes in the area.

It appears that the reason for the lack of sightings comes from the fact that if you’re in your car you are tied to the road and with that you isolating yourself from the surrounds. Who knows what lies in the next field beyond the hedgerows? It could be a fox it could even be a big cat but until you stop to look you will never know for certain.
Posted by Jon Downes at 11:41 AM 4 comments: 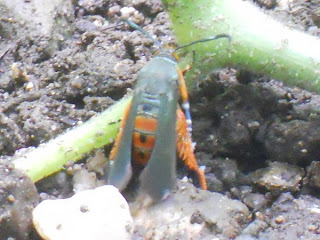 his flying around in my garden the other day. It seemed to like landing on the stems and leaves of plants, although it was not feeding on the plants as far as I could tell. Hind legs are red and seem fuzzy, much larger than other legs.

Middle legs have a zebra-like pattern.Thorax and wings are black. Abdomen is bright red-orange with three black spots running down the middle.Check out the links to the images. I'm just really curious as to what this thing is, I've never seen anything quite like it before.

Anyone have any ideas/definitive answers?
Posted by Jon Downes at 11:27 AM 3 comments:

JON AND DAVE B-P ARE ON THE ROAD

Graham and Corinna are running the blog today and tomorrow, because Jon and Dave B-P are on the road.

Goodness me!
Posted by Jon Downes at 11:07 AM No comments:

On this day in 1982 Roberto Calvi (AKA ‘God’s Banker’) was murdered under Blackfriars Bridge in the city of London. No-one has ever been successfully convicted of the murder, which is a conspiracy theorists dream involving the Mafia, the Vatican and illegal Masonic groups. The full story, or rather what is currently known, can be found here: http://en.wikipedia.org/wiki/Roberto_Calvi - it’s worth a look when you have finished reading today’s blog articles and the news stories.

RICHARD FREEMAN: The Monsters of Prague #20

The Gambling Daemon
There once lived a daemon in Vysehrad who was fond of playing cards, throwing dice and all kinds of gambling. He once took a bet with a monk called Boniface that he could carry a great stone all the way from Rome to Prague in the time it took the monk to say the Lord’s Prayer. If he failed he would pay the monk one thousand guldens.

As the beast spread his wings and flew away, the monk started praying. He said ‘amen’ just as the daemon returned clutching a stone column. When he saw he had lost he flung the column down and it broke into three pieces on Vysehrad Hill.

The church collation box was much heavier than usual on that day. As for the daemon, he walks around the three pieces of the column every second Friday, trying to put them back together.
Posted by Jon Downes at 11:06 AM No comments: