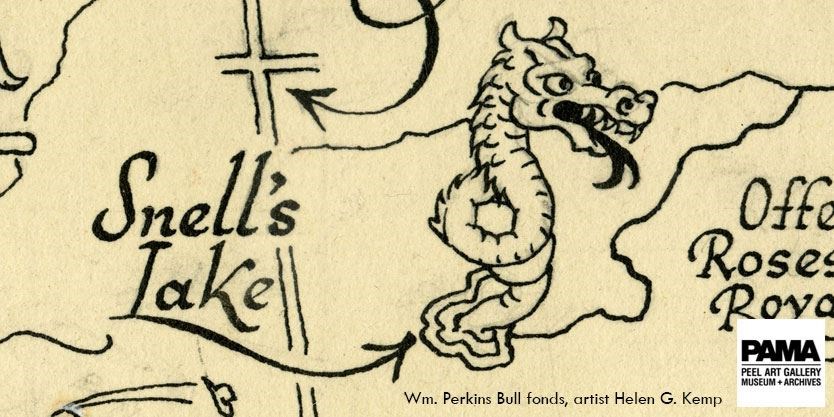 In the 1930s, historian Perkins Bull sent a survey to every family in Peel.

While the thousands of compiled pages collect names and dates, perhaps more valuable are the community stories passed along in letters to the author.

One of the wilder stories? The sea serpent of Heart Lake.

Bull tells more in his 1938 book “From Amphibians to Reptiles." Below is an excerpt from the book, telling the tall tale:

“Colonel A.E. Taylor, who owns Heart Lake, tells of strange subaquatic disturbances, which rustics ascribed to a survival or revival of some prehistoric monsters. It is claimed that water has been seen to spurt 15 feet or more in the air, somewhat as a whale spouts, but not in a single fountain. The moving column seems to plough through the water for 15 or 20 feet horizontally, at great speed, so natives believe it is produced by a moving animal.

“Many people, including Taylor and his family, claim to have seen the ‘serpent,' but descriptions are vague and incoherent. Stories such as this belong to fiction rather than to a scientific treatise, but the historian cannot resist making passing references,” when the lake was so close to Bull’s childhood home.

https://www.bramptonguardian.com/news-story/8689713-does-brampton-s-heart-lake-sea-serpent-really-exist-/
Posted by Jon Downes at 12:46 PM No comments:

ON THIS DAY IN -  1483 - King Richard III of England was crowned.
And now some more recent news from the CFZ Newsdesk