PLIGHT OF THE BUMBLEBEE (From the Bugclub Newsgroup) 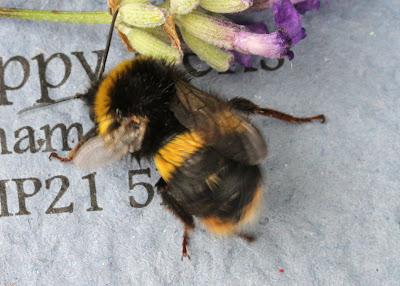 Can anyone help me with this? My neighbour has had bumblebees with deformed wings crawling to his backdoor; two or three a day for several days. He can't find a nest but lives close to a field boundary and some rough ground. What's happened to the bumblebees? He looked at one under a microscope and saw a white 6-legged crab-like parasite about 1/4 the size of the bee's eye. Is that anything to do with it?

What should he do?
Thanks and best wishes
David Newland

EDITOR'S NOTE: Many thanks to David for letting us reprint this
Posted by Jon Downes at 11:10 PM No comments:

Email ThisBlogThis!Share to TwitterShare to FacebookShare to Pinterest
Labels: bees

At the City Park in North Bonneville, I spotted a family of five Bigfeet and Littlefeet plus more Littlefeet frolicking in the trees.

Maybe it’s because Bigfoot hunting is prohibited in Skamania County. Or because the residents of North Bonneville were welcoming and friendly. But this family of Sasquatch (or is it Sasquatches?) has moved from the Cascade Forests to this small town that was built for the workers on the Bonneville Dam project in 1934. 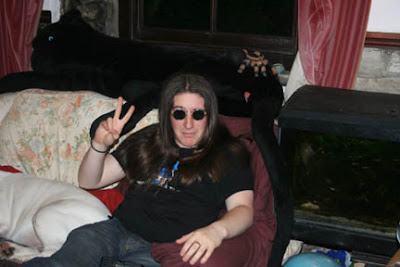 Photographed a week before flying to Cyprus. Could he have been hanging out with Jon too long?
Posted by Jon Downes at 3:05 PM 2 comments:

LINK: More on the Rare, Elusive "Goatman" Near Ogden

What's weirder than finding a man dressed as a goat in the middle of nowhere? Absolutely nothing. What started as an innocent hike up Ben Lomond Peak to look for some mountain goats resulted in one Ogden man stumbling across what appeared to be either a hard-working scientist or a guy who lives with goats, as a goat, in a shitty goat costume. The surprised hiker is Ogden resident Coty Creighton, who posted his hilarious tale of "goatman discovery" a couple of days ago on the social-sharing site Reddit. Though humorous, the original story is somewhat skimpy on details, so I messaged Creighton for a full breakdown.
'This happened Sunday morning, July 15, at precisely 10:21a.m.,' Creighton said to me via e-mail, 'I know this because I was texting a friend from atop the mountain, telling him he was missing out on the find of a lifetime. I was heading to Ben Lomond Peak, but this technically happened on the slopes of Willard Peak, just to the North of Ben Lomond. At first, I was just watching the goats, but there was the one odd shape that just stood out. It was bigger and a brighter white than the other goats. I tried getting a better view with my camera but I didn't have a telephoto lens with me, so I still couldn't quite make it out. I could see it wasn't walking the same, and it seemed clumsy in comparison to the other goats. I was racking my brain trying to figure out what other type of animal it could be. An albino bear? Honky Sasquatch?"

Here is the Goatman on all fours, probably doing some goat-related activity.
Read on...
Posted by Jon Downes at 2:59 PM No comments:

Email ThisBlogThis!Share to TwitterShare to FacebookShare to Pinterest
Labels: humour

Once again upon the Sabbath Day,
(like I do on every week this time)
I take the Gonzo Daily blog
and do the bloody thing in rhyme,
I'm not sure why I started or,
why I still stretch my mental sinew,
except that it amuses me,
and whilst it does I will continue.

So let's start with a disturbing tale,
of Hawkwind fans branded pariahs
but when you dig too deeply here
some claim the journalists were liars,
others say there was no show
and that the story is simply untrue,
we are still investigating,
so we can bring the truth to you...
http://gonzo-multimedia.blogspot.co.uk/2012/07/hawkwind-fans-branded-wrong-kind-of.html

Last week Norlander read my rhymes
I wrote when I was drinking lager,
and he said that I should write one
that read like a Viking saga,
but I'm not sure how to do that
with this nice review of Erik's tunes,
but I don't know how to combine this with
longships and horned hats and runes
http://gonzo-multimedia.blogspot.co.uk/2012/07/erik-norlander-galactic-collective-live.html

I have always been a massive fan
of the man whose name was Don Van Vliet
and my family watched the DVD
Gonzo put out the other night
'why did he call himself Beefheart?'
my mother-in-law asked of me
I just blushed and told her she
should watch this documentary
http://gonzo-multimedia.blogspot.co.uk/2012/07/captain-beefheart-documentary.html

They've been a favourite band of mine
since back in 1973,
and so its nice for me to post
this slice of Yes' history
and here is something I'd not heard
and something I will not forget
about how in 1968
Chris Squire and Jon Anderson met
http://gonzo-multimedia.blogspot.co.uk/2012/07/jon-anderson-meets-chris-squire-for.html

And it would not be a Sunday blog
although the rest is quite diverse,
I always try to find the space
for 8 lines of Liz Lenten verse,
because her album Indian Summer
is really bloody good you know,
so each week I still try to plug it,
and I've done it once again (ho ho)
http://gonzo-multimedia.blogspot.co.uk/2012/07/in-which-jon-nicks-some-arty-pictures.html

And finally, a picture of a middle-aged
hippy who writes dreadful rhymes they say,
with a book he received from the postman,
and a bottle of chardonnay
should he read or should he drink,
the conundrum is too much to ask,
so in the end he just does both
who says that men can't multi task?
http://gonzo-multimedia.blogspot.co.uk/2012/07/jons-big-conundrum.html

And so another week is ended,
and that's the end of my bad verse
but each day this blog will still continue
chronicling the Gonzo universe.
Posted by Jon Downes at 12:40 PM No comments:

Today is Pi Day (22/7 expressed as a fraction gives an approximation of the mathematical constant Pi) a date held in high regard by mathematicians and scientists the world over, except in the USA where they write the date wrong and celebrate on the 14th of March instead. Every year on Pi day, in a ritual that has taken place since the 16th century the current head of the Royal Society brings a Clarke's Pie into the whispering gallery of Saint Paul's Cathedral in London held aloft upon a golden plate once used by Sir Isaac Newton. The Dean of Saint Paul's then bangs his staff upon the floor and proclaims “Oi, Sunshine! No food in the gallery!” to whit the head of the royal society replies “Canst thou not makest an exception for it is the noble day of Pi!” and the Dean must retort and say “Very well, good sir, but only if you give me half, for Clarke's pies are the best pies in the land and you have to go all the way to Cardiff to get them.”
If you are in the area today, having for example come to London for the Olympics, this ceremony is scheduled to take place at 3pm.
And now the news:
Mmm, Pi:
http://www.weebls-stuff.com/wab/pie/
Posted by Jon Downes at 12:39 PM No comments: 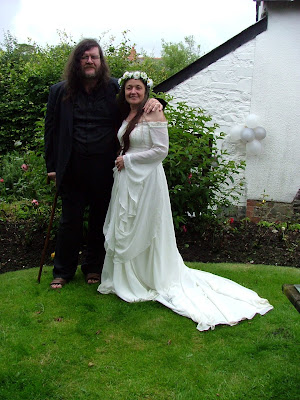 Thank you for marrying me, my dear.
Posted by Jon Downes at 10:46 AM 5 comments:

I have been having problems with the "Publish" button on this current blog entry all day now but I think it's good enough to post now:http://cedar-and-willow.blogspot.com/2012/07/some-footnotes-and-hughes-robotics.htmlAnd I'm sorry for the guys that looked at the page prematurely (8 views before it was even finished)-As I mentioned, I've been dealing with a most pestiferous Blogger Bug on this one.

Best Wishes Dale D.
PS: (I know anomalist.com won't publish the link I'm just sending it along FYI)
PPS: I am only getting intermittent and unreliable internet service now so if you don't hear from me for a while-that would be why)
Posted by Jon Downes at 10:44 AM No comments: