Posted by Jon Downes at 8:32 PM No comments: 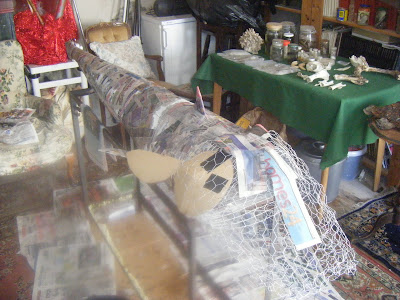 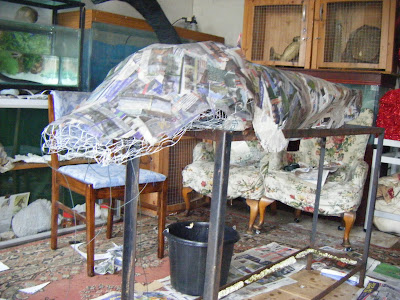 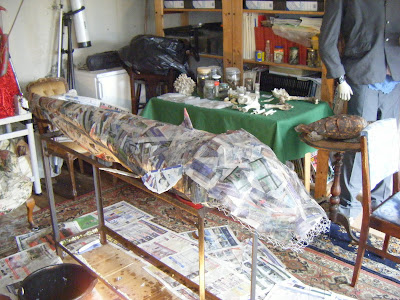 Posted by Jon Downes at 4:45 PM No comments:

MICHAEL NEWTON: A “Blob” That Never Was 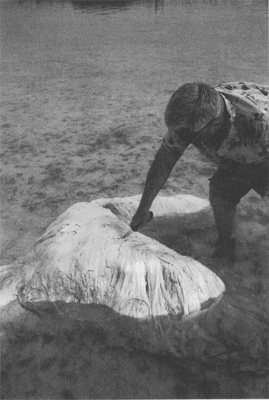 So far, so good ... except that several aspects of the much-abbreviated tale are false.

First, analaysis of the first “blob,” published in April 1995, did not specifically identify it as shark tissue. Rather, the report deemed it to be pure collagen from “the skin of a poikilothermic [cold-blooded] vertebrate.” Based upon the size of the carcass, the analysts found it to be “easily within the size range of a large teleost or an elasmobranch”—that is to say, either some bony fish from the infraclass Teleostei (40 orders with 20,000 extant species) or some member of the subclass Elasmobranchii (sharks, skates and rays, with some 940 extant species in all). Nothing more specific was offered, beyond a firm determination that the sample had 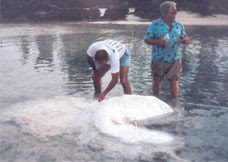 not come from a whale. In contrast, the flesh of another globster—beached at St. Augustine, Florida, in 1896—was identified as whale blubber.2
In passing, we must also note that the 1995 report misstated the date when “Blob 1” was discovered, placing it in “summer 1988” rather than May (the middle of spring).3 That minor negligence assumes greater importance as we search for “Blob 2.”

Information concering that second carcass was so vague online that I pursued it while researching Globsters, a forthcoming volume from CFZ Press. Specificallly, I contacted the Bermuda National Library, in hopes of pinning down the date when it surfaced. To my surprise, librarian Ellen Hollis reported that local newspapers contain no mention whatsoever of a carcass found at any time in 1995. Neither do library archives at the 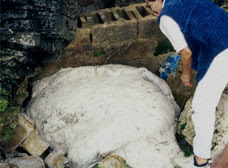 Bermuda Aquarium, Museum and Zoo. In fact, it seems that “Bermuda Blob 2” did not arrive until January 1997. In short, it was identical to “Bermuda Blob 3”—and “Blob 2” never existed!

How was the second globster fabricated? It appears to be the result of a typographical error, found in a June 2004 report comparing two Bermuda carcasses with three other globsters discovered in Florida, Massachusetts, and Tasmania. The new report’s five authors included three who collaborated on the April 1995 article.3
While citing their earlier study repeatedly, the authors claimed that “Bermuda Blob 1...washed onto Bermuda in 1995,” rather than 1988—an error that apparently deceived both Wikipedia’s anonymous contributor and all who followed after, plagiarizing his/her text.4

A more significant discrepancy arose in 2004 from microscopic comparison of the five globster samples—which, once again, included flesh from the 1896 St. Augustine carcass. This time, still citing their 1995 article as a reference, the authors claimed that “[t]he microscopic anatomy of all the carcasses...is virtually identical. These large masses consist almost entirely of pure collagen fibers arranged in cross-hatched layers, often perpendicular to each other. This arrangement is exactly that of the collagen fiber infrastructure of freshly preserved humpback
whale blubber.”5

So, what happened between 1995 and 2004 to alter the microscopic anatomy of “Bermuda Blob 1”? How was it transformed from the tissue of a cold-blooded fish into humpback whale blubber? And how can authors of the June 2004 report cite contradictory findings from their own April 1995 article to support the later claim that all five globsters were “nothing but whales”?6

The rest—at least for now—is silence. But we know one thing beyond a shadow of a doubt: there was no 1995 “Bermuda Blob.” The local carcass-count stands at two, until such time as the Atlantic Ocean yields another mystery. 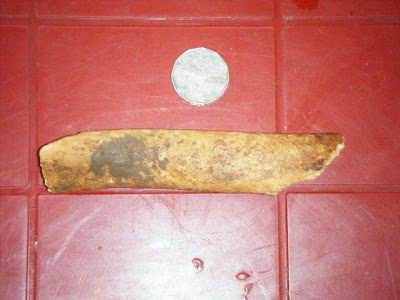 The India Expedition brought back several sets of samples last November. One was this bone, found deep in some caves. Lars Thomas confirmed to us a couple of days ago that it was from an adult human, and quite old. He is disposing of it with due reverence, but meanwhile... the search continues.
Posted by Jon Downes at 11:42 AM 1 comment:

It might not be the Weird Weekend, but the University of Florida's Bee College is held annually at St. Augustine Florida, and looks like a great way to spend two days. I mention Weird Weekend because, like the CFZ, the Bee College encourages young people and amateurs to get seriously involved in studying animals. An important topic for discussion this year was native bees and how to encourage them to nest and act as pollinators. Learn more and get their brochure at:

Robert Schneck wrote to me asking whether we could possibly post some of the videos that Andy Roberts has done of the badgers in his garden. We emailed Andy who was kind enough to post three of them on Youtube for us. Here is the second one:

Tell me what we're going to need?
http://www.youtube.com/watch?v=8gciFoEbOA8
Posted by Jon Downes at 11:31 AM No comments:

This tale of fraud, nudity and possible blackmail has nothing to do with cryptozoology. But we post it (and Dasle wrote it) to illustrate quite how far some people seem to be prepared to go in order to cause trouble on the internet...
Posted by Jon Downes at 11:27 AM No comments: