This 37th collection once again really is a collection of completely uncategoriseable stuff, including Earth 2 speculation, a murderous sorcerer in Indonesia, political correctness gone mad, an inapprropriately saucy sky diver, and a comic book warrior nun. It doesn't get much better than this. Good stuff.
HERE
Posted by Jon Downes at 2:28 PM No comments:

CFZ AUSTRALIA: We're on the telly!

Just thought you might be interested to know an interview we did about our book BEFORE last August's Weird Weekend 2010 FINALLY aired last night in Australia. Here's the link to the video on Youtube:

And the link to the TV show's page with people writing in with their Australian sightings:

Rebecca
Posted by Jon Downes at 2:27 PM No comments:

There is a melancholy time in rural communities when belief in fairies dies – a moment in a village life comparable to the moment in a child’s life when he sees his grandfather’s face behind the Santa beard. Wentz examined this fairy death in Ireland and Scotland and Wales in The Fairy Faith in Celtic Lands (another post another day), while in much of England the death of the little folk was connected with the Reformation. However, there were some outlying English regions where belief in fairies continued up into the nineteenth century.

Beachcombing particularly enjoys the following story that straddles the period of belief, disbelief and, inevitably, incredulity. Come, reader, to Ilkley in deepest Yorkshire at the Wells, the local baths. The event described took place in about the year 1815 and we are in the company of William Butterfield ‘a good sort of a man, honest, truthful, and steady, and as respectable a fellow as you could find here and there’.

Read on
Posted by Jon Downes at 2:16 PM No comments:

Email ThisBlogThis!Share to TwitterShare to FacebookShare to Pinterest
Labels: fairy 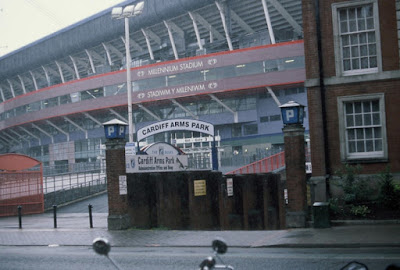 Not many capital cities can lay claim to have been the home of a cryptid. On occasion fortean zoology and related subjects will crop up in the founding myths of the great cities of the world (such as Rome's origin myth where it's founder and his brother was raised by a wolf) on occasion or as protectors of cities and countries; for example, the head of Brân the giant protecting Britain from invaders. But one cryptid said to have made its home in the Welsh capital of Cardiff was a bit different.

The Cardiff Winch Serpent had nothing whatsoever to do with the city's founding and was the certainly not a protector of its people. The Great Snake was said to have made its home in the River Taff and would coil and uncoil its gargantuan body underwater to create a treacherous whirlpool, drawing unsuspecting swimmers and boats into its watery larder to feast upon. According to some accounts the serpent was aided and abetted in this endeavour by a beautiful woman. In the words of the folklorist Marie Trevelyan:

“An old woman who was fond of telling nursery stories related to her by her grandmother said that the Taff whirlpool was frequented by a lovely lady, who lured people whilst bathing. Youths were known to swim or row towards her, attracted by her beauty. They were then sucked into the vortex, and their bodies could never be found, said the narrator, "and it is fathomless. It reaches from the Taff to the mouth of perdition, where Satan waits for the souls who are beguiled by the lovely lady." She said the lady was the devil in disguise. "It is a dreadful winch," in Wales the word "winch" is always associated with water.”

It is up for debate who the originators of this tale were; it may well have been concerned parents wanting to keep their children from swimming in treacherous waters as with other tales of Winch Serpents from Wales such as in the Great Gutter by the Nash Sands or the Kenfig Pool near Porthcawl. But the additional detail in this case of swimmers being lured out by a good-looking moist lass suggests it may have been intended to ward off a slightly older audience in this case. It is interesting to note that the Winch Serpent was said to frequent an area of the Taff a little way to the south of the pirate dock.* Pirates attempting to scare people away from their section of the Taff could be a plausible source of the stories.

If you want to visit the approximate site of the Winch Serpent's whirlpool for yourself it is quite easy to do. Simply get off the train at Cardiff Central station and head in the direction of the Millennium Stadium. Because this part of the Taff was filled in and re-routed to drain the marshes the station was to be built on you'll have to walk up the non-Taff side of the stadium. Eventually, after passing the old customs house, you'll come to a junction by a multi-story carpark. As you stand near the gates of the stadium here you will be standing roughly where the pool was.


*(interesting fact while I think of it: you know the generic pirate accent you hear in films? That was actually based on a really bad amalgamation of both a Cardiff and Bristol accent by the first actor to play Long John Silver in a talkie version of Treasure Island. These days, however, few people even know that Cardiff had at one time the largest pirate dock in Europe so good the pirates were at bribing and threatening the authorities)
Posted by Jon Downes at 2:12 PM 1 comment:

I would just like to wish you a Happy New Year. Hopefully this year will be a better one for us all. I also hope you and Corinna are feeling better now. I needed to email you because I wanted to known if your Staffordshire Representatives Shoshannah Hughes and Lisa Malam have any reports of sightings of strange animals in the Shelton area of Stoke on Trent.

Last night at about 8.15 pm Brenda and I where in her car travelling on Etruria Vale Road in Shelton Stoke on trent, as we approached the brow of the hill something shot out from behind a parked car and ran across the road in front of us. It was that quick Brenda did not even see it and to me it looked just like a black blur. I thought it was a normal black domestic cat; we have a lot around here. However, as we got level with the point it had crossed the road I looked down the alleyway on the other side and saw something very odd. This thing was about the size of a fox in height, but its body was longer a bit like a ferret. Its ears where small and rounded and facing forward. However, the thing that made me think this animal just was not right was its shoulder blades, they were very bony and the gap between them was very small. It was moving up the alleyway at the time and it walked pressed hard up against the wall as if it was stalking something. I did not get to see its face as it was walking away from the road it did not turn to look at us as we passed. I thought this was odd because most domestic cats stop and turn to have a look at who is passing. It was not a black leopard it was just too long and small but it was not a normal cat either. I have taken photographs of Leopards and this thing was not one of them.

If you need any more information then email me, if I think of any thing else then I will get in touch. Brenda as since told me she saw the same sort of animal a year a go in the same spot, she said it just did not seem right she could not put a finger on it but it just was not a normal looking animal. Brenda did not see it last night she was watching the road and I did not say any thing until we had passed it and gone through some traffic lights. By then it was too late to stop and turn back it would have gone it was moving fast.

Ps I may send this email onto Dave Sadler at the UPIA just to see if they have any reports of anything similar.

Mick
Posted by Jon Downes at 2:10 PM No comments:

http://karlshuker.blogspot.com/2011/01/new-video-of-tunceli-winged-cat.html
Posted by Jon Downes at 2:07 PM No comments: