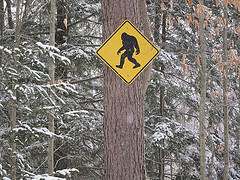 
A paper on the genetics of mythical creatures — yeti and bigfoot — is being corrected after the journal discovered the first author, Bryan Sykes, listed a mythical institution.
The Proceedings of the Royal Society B paper, “Genetic analysis of hair samples attributed to yeti, bigfoot and other anomalous primates,” examined 30 samples from “museum and individual collections” that had been labeled as the North American bigfoot, Tibetan yeti, Mongolian almasty, and Sumatran orang pendek. The analysis showed the samples actually came from a variety of species, such as bears, horses, and cows. Perhaps the most striking is the paper’s claim that two samples match with a prehistoric polar bear, “but not to modern examples of the species.”
According to a spokesperson for the journal, “The correction is being made because the institution the author Brian Sykes gave as part of his affiliation does not exist.” The exact wording of the notice has yet to be decided.
Read on...
Posted by Jon Downes at 2:06 PM No comments:

THE GONZO BLOG DOO-DAH MAN HOPS AND SKIPS AND JUMPS ON OCCASION, AND THEN HE MIGHT BE PREVAILED UPON TO DO IT AGAIN, BUT I WOULDN'T BET ON IT


* Jon Downes, the Editor of all these ventures (and several others) is an old hippy of 55 who - together with an infantile orange cat named after a song by Frank Zappa puts it all together from a converted potato shed in a tumbledown cottage deep in rural Devon which he shares with various fish, and sometimes a small Indian frog. He is ably assisted by his lovely wife Corinna, his bulldog/boxer Prudence, his elderly mother-in-law, and a motley collection of social malcontents. Plus.. did we mention the infantile orange cat?
Posted by Jon Downes at 1:44 PM No comments:

A Kid May Have Actually Filmed A Bigfoot From A Drone (Video)
Before It's News
Almost any Bigfoot researcher who can afford it are using drones these days. A lot of people are seasoned veterans of Bigfoot research but who would ...

Malapascua is a wonderful tropical dive location sites with something to suit everyone's tastes. You can find seagrass muck dives full of macro life, remarkable night dives with a lot of curious creatures, shallow reefs with healthy corals, dramatic drop-offs, a couple of good wrecks and some outlying islands to explore. However, what makes it stand out from most other Philippines destinations, and makes it arguably one of the very best dive spots in South East Asia, are its thresher sharks. They are what put Malapascua on the map.

This Indian and Pacific Ocean species is about three metres long, and almost half of that length is made up of its spectacularly long tail. Any pelagic shark is a stunning sight but the first time I set eyes on a thresher shark, using lazy tail swishes to glide effortlessly water, I was filled with awe. It is hard to imagine a sleeker or more perfectly evolved animal to its environment — if I had to choose one creature to represent the strange, beautiful and alien world of the ocean, this would be it.
Read on...
Posted by Jon Downes at 12:13 PM No comments:

ON THIS DAY IN 1813 - U.S. troops under James Wilkinson attacked the Spanish-held city of Mobile that would be in the future state of Alabama.
And now some more recent news from the CFZ Newsdesk


AND TO WHISTLE WHILE YOU WORK... (Music that may have some relevance to items also on this page, or may just reflect my mood on the day)
Posted by Jon Downes at 12:43 AM No comments: