An introduction to dragons – the granddaddy of all legendary monsters – has already featured in these pages. Now the Zoological Director of the Centre for Fortean Zoology in Devon expands on the theme by discussing some of the varieties of dragons once believed to haunt these shores.

Guidelines
The contest is open to anyone who prepares a short, funny video for YouTube which communicates a clear message that strongly motivates a specific behavior change (for example, driving a fuel efficient car, turning down thermostats, or donating to a conservation cause).

Submissions must:
Be humorous!
Address a critical environmental issue
Be an original production
Reach a broad audience beyond just environmentalists
Be less than three (3) minutes

There will be six judges representing the Center for Environmental Filmmaking, Sierra Club, the US Environmental Protection Agency, Mill Reef Productions, and Eco-Sense. The decision of the judges is final. Awards are based on overall merit of the entries. Judges reserve the right not to grant an award. The organizations listed above reserve the right to post submissions on their websites.

Questions may be addressed to Chris Palmer at palmer@american.edu.

Email ThisBlogThis!Share to TwitterShare to FacebookShare to Pinterest
Labels: competition

BE CAREFUL WHAT YOU WISH FOR, FOR THE WISH MIGHT COME TRUE


The other day when snow fell on Dallas, Nick Redfern joked about `The Devil's Footprints`...
Posted by Jon Downes at 11:56 AM No comments:

KITHRA HAS HAD ENOUGH OF FACEBOOK (and who can blame her?)

http://kithraskrystalkave.blogspot.com/2011/02/facebook-problems.html
Posted by Jon Downes at 11:56 AM No comments:


“this cat is over 9ft long and approx 150lbs. Photo has not been altered.” Says the hunter who shot it in Orofino, Idaho


It may be legal to hunt these majestic cats, but I find it very sad none the less.

DALE DRINNON: The Question Was "What Do We Do With THE BODY?"

This is a matter with a practical solution to an age-old problem, although it may not be suitable for the squeamish.


"A ghoul is a folkloric monster associated with graveyards and consuming human flesh, often classified as undead. The oldest surviving literature that mention ghouls is likely One Thousand and One Nights. The term is first attested in English in 1786, in William Beckford's Orientalist novel Vathek,[1] which describes the ghūl of Arabian folklore.

Ghoul is from the Arabic ghul, from ghala 'to seize'[2].Marc Cramer and others believe the term to be etymologically related to Gallu, a Mesopotamian demon[3][4]

In ancient Arabian folklore, the ghūl (Arabic: غول , literally demon)[5] dwells in burial grounds and other uninhabited places. The ghul is a devilish type of jinn believed to be sired by Iblis.[6]

The Arabian ghoul is a desert-dwelling, shapeshifting demon that can assume the guise of an animal, especially a hyena. It lures unwary travellers into the desert wastes to slay and devour them. The creature also preys on young children, robs graves, drinks blood, steals coins and eats the dead,[5] taking on the form of the one they previously ate.

In the Arabic language, the female form is given as ghouleh[7] and the plural is ghilan. In colloquial Arabic, the term is sometimes used to describe a greedy and/or gluttonous individual."

--On the other hand, Cryptozoologists have inferred the name is not Arabic at all, nor is it Iranian (in which "Ghul" means a rose) It is Turkic and part of a well-known cluster of names for the "Wildman" of Turkestan and the Near East, Gulub-Yavans (As Gordon Creighton points out, the "Yavani" means "Wild" in Turkic and the name means "Wild Man") Heuvelmans records that the term of Ghul or Gul alone (in some sources spelled Ghool) is in usage in places.

In other words, the Wildman acquired a reputation of digging up dead bodies in order to eat them, a habit otherwise ascribed mainly to jackals and hyenas. Hence the Wildman is sometimes said to be able to transform into these animals.

It would seem that the Wildman or Neanderthal type has a habit of eating the dead of their own kind and there are occasions when a dead body of an Almas (or one of the American Almases) is buried with a mind for witnesses to dig it up again as evidence, only to find the body has been dug up again when they DO get back to recover it. Presumably other Almases have dug up the body in order to eat it.

There is evidence for cannibalism at certain Neanderthal sites where their bones have been scraped with stone knives in getting the meat off them, and the bones treated the same as other kitchen refuse. It would seem that the usual practice among Almases is to eat already-dead corpses, but some of the larger ones (called variously Trolls, Orcs [Orcos], Onis or Ogres) are traditionally said to seize and eat humans, in particular small children, with a preference for young boys. That may have happened occasionally but there are no known cases of this still going on as a regular occurance.

The same thing might be said to be true about sasquatches, except that traditionally the size of the human prey is no matter and they will go after adults just the same as after children. For this reason it is probably a mistake to flatly discount stories about the "Cannibal Giants" even if humans are not ordinarily on the menu for sasquatches much any more. But THEY also seem to eat the dead of their own kind as well, and also they seem to preferentially seek out dead bears when they can find them. In North America, sasquatches will steal deer carcasses from hunters regularly, and the association with sasquatches stealing deer meat is one of the more definite recurring indicators of what their diet usually is. [Neanderthal Cannibals at Krapina Rock Shelter by Z. Burian]
Posted by Jon Downes at 11:51 AM No comments:

On this day in 1812 Charles Dickens was born.
And now, the news:

Yeah, they'll perhaps be requiring a larger seafaring vessel of some description:
http://www.youtube.com/watch?v=CEi3OhYi6Gg
Posted by Jon Downes at 11:50 AM No comments: 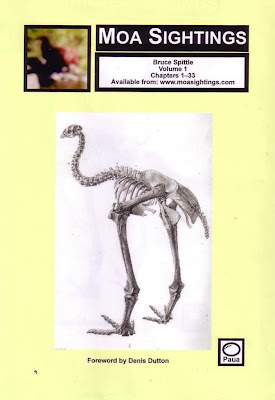 Max eceives the major new three-volume work on contemporary moa sightings, and is very favourably impressed.
Posted by Jon Downes at 11:00 AM No comments: