DALE DRINNON: The Creatures That Came To Toledo

http://frontiersofzoology.blogspot.com/2011/02/creatures-that-came-to-toledo.html
Posted by Jon Downes at 12:44 PM No comments:

The Sea Shepherd Conservation Society has put an end the Japanese whaling fleet’s murder of marine mammals, for this year at least. The whalers were forced to cut short this year's Antarctic whale hunt and Japan's whaling fleet is heading back to port with less than half of its projected quota. The Sea Sheppard ships Gijira and Bob Barker (the former named after the Japanese movie monster) had harassed the whalers making hunting impossible for them.

In November last year, in defiance of global opposition and several international laws, Japan's whaling fleet set off for the pristine Southern Ocean Sanctuary with the intention of slaughtering 1,000 whales. Despite a global ban on commercial whaling, Japan has continued to hunt whales under the loophole of ‘scientific whaling', yet while the meat is put on sale in restaurants and supermarkets, no science has been ever produced from the slaughter of these animals.

Hopefully the heroic efforts of the Sea Sheppard group this year will prove the death knell for whaling.
Posted by Jon Downes at 12:33 PM 1 comment:

Here is a video on Ken Gerhardt's presentation in Austin on Friday night.

http://www.kens5.com/entertainment/SA-manMonsters-in-Texas.html
Posted by Jon Downes at 12:32 PM No comments: 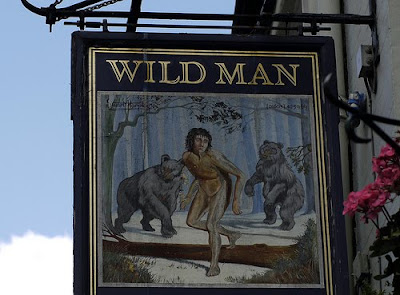 THE WILD MAN
Many years ago when I first began writing for Animals & Men magazine (around issue 5 or 6) I mentioned to Jon Downes something regarding cryptozoological pub signs. There are many St George and the Dragon signs, and I know a few which also mention unicorns. However, one particular pub sign which is of great interest to me is that which belongs to The Wild Man at 29 Bedford Street in Norwich. Now, most pub signs have a meaning but the legend which pertains to The Wild Man is extremely intriguing. So the folklore states, that many, many years ago a six year old boy named Peter became lost in a wood in Germany. Around six years later the boy had grown wild, and in naked form would prowl the woods, living alongside the resident animals. Eventually he was found and picked up by a travelling showman who exhibited throughout Europe. St Mary’s Northchurch adds more to the legend for within its walls there is an inscription which reads:

To the memory of Peter, known as the Wild Boy, having been found wild in the forest of Hertswold nearHanover in the year 1725. He then appeared to be about 12 years old. In the following year he was brought to England by the order of the late Queen Caroline, and the ablest masters were provided for him.But proving himself incapable of speaking, or of receiving any instruction, a comfortable provision was made for him at a farm in this parish, where he continued to the end of his inoffensive life. He died on the 22nd of February, 1785, supposed to be aged 72.

Peter’s tombstone can be found in front of the church porch and simply reads: PETER the Wild Boy 1785.
Around 1751 Peter was housed at the public house and in the past the sign would depict the unfortunate chap as a demonic character amid flickering flames. Now, the pub sign shows him frequenting the forest alongside bears.
The church website adds even further details to this fascinating story:

‘Other local accounts describe with more detail how King George I was hunting in the woods near Hamelin when his party encountered the boy. They assumed that he had been living in the woods by himself for some time, but the only indication that he had had a normal childhood was the remains of a shirt collar around his neck. It has never been possible to establish why Peter was in the woods on his own – had he been abandoned by his family, had he simply become lost, or was there some family trauma from which he was the only survivor?
At the English court, many efforts were made to educated him, but all failed. He was clumsy and unable (or unwilling) to adapt to the behaviour patterns of the royal household, and he never uttered a single syllable. After a while, the court tired of Peter, and he was entrusted to the care of Mrs. Tichbourne, one of the Queen’s bedchamber women, who received a handsome pension for his maintenance. While he was under her protection, Peter was brought to Northchurch when Mrs. Tichbourne visited a yeoman farmer called James Fenn at Axters End. After several visits, Peter was given over to the care of James Fenn, and the government granted a pension of £35 per annum to him. On James Fenn’s death, Peter was transferred to Broadway Farm, where he lived out his days.

Contemporary accounts of Peter depict him as a strong man, who worked alongside the farm labourers and also had an intense love of music. Apparently, he would dance strenuously while any musical instrument was being played. Peter was also given to wandering, and on one occasion, travelled as far as Norwich. There he was arrested on a charge of spying, and as he did not speak, was assumed to be a Spanish subversive. He was delivered from jail by one of the courtiers, and from that point on, wore around his neck a leather collar with a brass plate, which reads:

Peter the Wild Man from Hanover. Whoever will bring him to Mr. Fenn at Berkhamsted, Hertfordshire, shall be paid for their trouble.

This can still be seen, at Berkhamsted Collegiate School.’


AN ESCAPED TIGER
Another story related to a travelling zoo comes from the area of The Bear Inn, situated near Norwich city centre. On 5th November 1788 a large tiger escaped from its cage, terrified local folk and ate two monkeys. The beast, not long after being captured, died of gangrene because it had swallowed the chain and collar which had once shackled it.

SPRING-HEELED JACK IN NORFOLK
Spring-Heeled Jack, the terror of Victorian London was said to have accosted victims elsewhere in England, mainly around Everton and Aldershot, and accounts also exist of him loitering around Kent, Surrey and Sussex. No-one knows who or what SHJ was, and reports exist in the modern era, from Kentucky, Massachusetts and Philadelphia in the United States, to Dourdan Woods and Montmorency in France, and the Monte Maiz phantom in Argentina. Norfolk has also had its Spring-Heeled Jack panic which took place in 1860. On 21st January it was reported that in Southtown, Great Yarmouth, a figure in a white tight-skin dress and having goat horns on its head, attacked an employee of East Suffolk Railway and ‘left him insensible on the ground’. Fifteen years previous a man wandering the ill-lit streets in a nightshirt was attacked, and eventually died from his wounds, after panicked locals thought he was the leaping phantom. In 1877 SHJ was allegedly seen leaping from rooftop to rooftop in the Caister-on-sea region of the county.
Posted by Jon Downes at 12:21 PM No comments:

On this day in 1965 Stan Laurel died. Laurel was one half of Laurel and Hardy and the writer of the duos material. Their comedy often contained fortean and paranormal themes, ghosts in particular.
And now the news:

Chinese pandas leave for Japan
Half a dodo found in museum drawer
Local Photo: Resident wonders if unusual animal is...

Have you heard about that bat? Eats your goat and then your cat...
http://www.youtube.com/watch?v=gVWLrloeToA
Posted by Jon Downes at 12:20 PM No comments: