29. Faroe isles
Our first stop in the European leg of our travels brings us to the rather charming Danish dependency of the Faroe isles. While they consist of only 18 islands they do have a number of creatures of cryptozoological interest. However the one I am going to look at today wasn’t on the land but was to be spotted in the waters around the islands.

The event took place a few years before 1846 and concerned a sighting made by Captain Christmas of the Danish Navy. Whilst in command of a Danish frigate sailing between and the Faroe isles he spotted something most unusual in the water, a large shoal of porpoises were racing towards the ship giving the impression that they were trying to get away from something unpleasant. That something unpleasant soon made an appearance, a horse-like head upon a neck some 18 feet tall appeared out of the water before heading back under the waves in a motion similar to that of a duck diving. Was it just coincidence that the creature was sighted close to the fleeing mammals or does it give a clue to what these large mystery sea creatures love to eat?

If you would like to read more about the mystery animals of the Faroe isles then I would recommend that you get your hands on a copy of my book The Mystery Animals of the British Isles: The Northern Isles, if only to find out how I managed to include them in a book about the British Isles.
Our next stop is just a short boat trip away. We are off to .

ABOUT 200 Bigfoot-like footprints have been discovered near Kampung Kepis Baru, Kuala Pilah, causing panic among villagers, reported Harian Metro.
Adnan Pungut, 48, claimed he discovered the footprints when he was clearing rubbish and wood at his rubber estate at 3pm on Saturday.
“I immediately informed the others because I was scared. I told the other villagers and all of us went back to the area.
“We found 200 footprints that were about the same size and tried to follow them,” he was quoted as saying.
“Based on the footprints, we can assume that the creature has two legs and weighs more than 100kg,” he said.
Read on...
Posted by Jon Downes at 3:04 PM No comments:

New At Frontiers of Zoology:

And at Benny's blog The Ominous Octopus Omnibus, another retelling of the Orson Welles War of the Worlds broadcast, as told by Superman comics:
http://bennypdrinnon.blogspot.com/2013/06/superman-meets-martler.html
Best Wishes, Dale D.
Posted by Jon Downes at 1:09 PM No comments:

And so another working week shudders to an end. Last night I had a long chat with one of our authors who also works for the DSS. He told me about the obscenely draconian legislation for benefits claimants which is being proposed for 2015 and after. I really cannot believe that any government could be so harsh, and I would love to say that I think that the British people are not going to just like down passively and take this latest affront towards our individual freedoms. But I am sure that we will all just roll over like good little puppies and take it. What the hell happened to the spirit of protest and dissent? Like John Lennon said: "Keep you doped with religion and sex and TV, And you think you're so clever and classless and free", and we all know what he said next.

Wise up people. Before it is too late.
I heard from Richard who telephoned me briefly from Gatwick. By now, he, Christophe and Adele should be in Sumatra. Let's all keep our collective fingers crossed that the expedition in search of orang pendek - the undiscovered upright walking ape of Sumatra - is a success.

*  Jon Downes, the Editor of all these ventures (and several others) is an old hippy of 53 who - together with his orange cat (who is currently on sick leave in Staffordshire) and two very small kittens (one of whom is also orange) puts it all together from a converted potato shed in a tumbledown cottage deep in rural Devon which he shares with various fish, and sometimes a small Indian frog. He is ably assisted by his lovely wife Corinna, his bulldog/boxer Prudence, his elderly mother-in-law, and a motley collection of social malcontents. Plus.. did we mention the orange cat?
Posted by Jon Downes at 1:07 PM No comments: 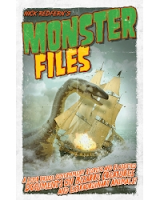 On this day in 1926 Mel Brooks was born. Brooks was responsible for several classic comedy films including Young Frankenstein, High Anxiety and Spaceballs.
And now the news:


A classic scene from Spaceballs, Brooks' best film:
http://www.youtube.com/watch?v=XU1MAokrrUk
Posted by Jon Downes at 10:06 AM No comments: