I AM NOT SURE WHAT - IF ANYTHING - TO MAKE OF THIS

"WEIRD CREATURE AT THE FENCE"

This story was posted on the Paranormal Buffalo email group, and is re-posted courtesy of Rick:

Weird Creature at the Fence
BY CASSIE
This happened only a few weeks ago in a town about an hour from mine. I was visiting a friend of mine. Now, my friend lives in the not-so-nice part of the city where there's a lot of crime. The reason I explain all this is because it makes this particular incident all the more strange.

It was around 4 p.m. and still light out when my friend decided to let the dog out. I went outside with them and waited as my friend's dog, a German shepherd named Annakin, did his business. My friend and I were standing on the back deck, and Annakin was down in the tiny backyard in the grass. Each house had a very small backyard and was closed off by high wooden fences. There was a narrow alley between each fence at the very backs of the yards that bordered the backs of the houses across from us.

As we waited there, we heard loud panting coming from the little alleyway. It was easy to discern that the panting was coming from a rather large creature. Annakin lifted his head and perked his ears in alarm. The creature suddenly raced through the alley way, making the entire fence-line shake, and we could hear the loud, heavy panting the whole way down the road.

We caught a quick glimpse of it as it passed a break in the fence. All we saw, though, was an enormous, gray, furry blur. And Annakin had leapt up onto the deck in what seemed like fright and cowered behind our legs. My friend and I both said, "What the hell was that?!"

Of course, my first instinct was it was a dog, but what kind of big dog would make all the fences on the block shake like an earthquake hit? And that panting noise was so loud and odd-sounding... almost as if a human was pretending to be a dog and pant. Why would such a large creature be in the middle of the ghetto? And why was Annakin, a fearless German shepherd, seemingly terrified of it? Weird!
Posted by Jon Downes at 11:54 AM No comments:

Email ThisBlogThis!Share to TwitterShare to FacebookShare to Pinterest
Labels: paranormal 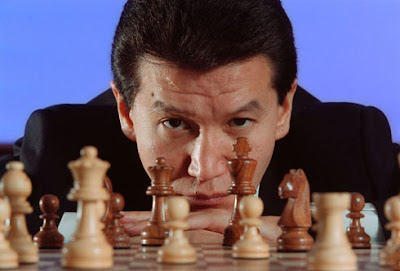 Don’t say I didn’t warn you some time ago. Us chess players are weird, that’s true, but we are led by the chief of hyperbole – or is he in fact telling the truth?

The New York Times was approached by the President of the World Chess Federation, Kirsan Ilyumzhinov, who offered to answer readers’ questions. The result is a Q+A which deals with all aspects of Ilyumzhinov's career and work, including the perennial question about alien abduction and the galactic origin of chess. Turns out he will be publishing a book on the subject.

· Was chess given to Earthlings from extraterrestrial visitors? "I do, indeed, consider chess a gift from extraterrestrial civilizations. Chess is one of the world’s oldest games. But where was it invented? In India? But an ancient set of figures was also found at excavations in the Bulgarian town of Plovdiv. And two years ago, the president of Mongolia showed me chessmen discovered when they were searching for the grave of Genghis Khan and excavated a kurgan. There have been similar finds in Latin America and other parts of the world. And in those times, of course, travel was almost impossible. But the rules of chess were almost identical everywhere. It is hard to imagine that people in different parts of the world many thousands of years ago simultaneously thought up an identical game with the same rules just by chance. But again, I will set forth my opinions in the book, and we can discuss my theses in greater detail”.

I will keep you posted,

Carl Portman
Posted by Jon Downes at 11:52 AM No comments:

WE KNEW THAT THE CFZ WAS BECOMING MORE INFLUENTIAL, BUT THE RSPB ARE EVEN STEALING RICHARD'S PUNS!

WHY THIS VIDEO CARD DIDN'T WORK 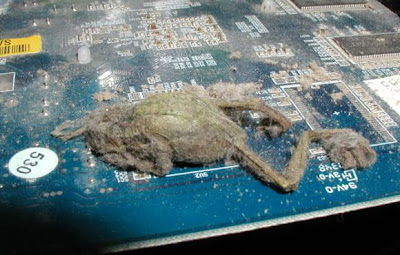 This is from a post on the Paranormal Buffalo email group, courtesy - as always - of Rick. The blurb goes:

A shaken Richard Boyle explains that he and his colleagues down at Sneakers Computers in Courtenay, British Columbia, "built this system, so it hadn't come from the manufacturer like this". He adds: "The frog was significantly bigger than any of the openings in the case, so we don't know how it got in."
I post it not just because it is a peculiar picture but because something like that happened to me once. When my family left Hong Kong in 1971, my mother bought a Japanese rice cooker with her. It worked perfectly when she packed it, but when it arrived in Woolsery it was kaput. My father investigated and found a small gecko, very dead and dessicated inside the plug. Weird huh?

Does anyone have any explanations for how either herp met its end?
Posted by Jon Downes at 11:41 AM No comments:

A QUESTION OF MALE MICTURITION

On Monday morning I was up early and posted the following message to Usenet:

'Graham and I drank some brandy last night. Not a terrible amount, but we were slightly light headed. I went to sleep fairly quickly, but - as usual - woke up to obey a call of nature at 4.30 and couldn't get back to sleep. This is a fairly recent phenomenon, and only seems to happen after I have imbibed. The fact that there was a large bulldog snoring in my ear undoubtedly didn't help! This is why I am up and bloggifying so early!'

One of the replies I got was from Lawrie Williams:

"I thought most men wake up at least once and often 2 or 3 times at night for a pee. It refreshes the system to have to move around and I suspect it is the result of selective pressure - no joke intended - in that the head of the family gets to detect enemies and predators and infidelities. For a typical clan grouping of 20 people it would mean someone was always up and about during the wee small hours".

Is this true? Or a modern legend arising from the physiological changes in ageing men? And why can I never get back to sleep when I have had a drink or two?
Posted by Jon Downes at 11:38 AM 3 comments:

On this day in 1980 John Lennon was murdered by Mark Chapman.

Coolest version of the Spiderman theme you'll ever hear:
http://www.youtube.com/watch?v=9WQJg5fP0U8
Posted by Jon Downes at 11:37 AM No comments: