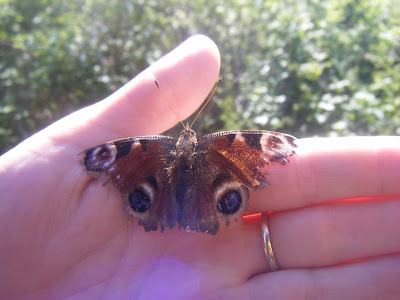 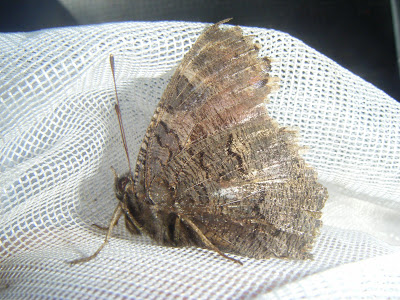 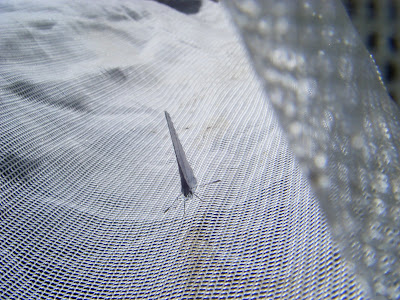 Max and I went out for an hour or so yesterday afternoon, and following the same route as yesterday, we again saw ten species - two of them being different to the ones we saw the day before. The two new ones being Peacock (Inachis io) and Holly Blue (Celastrina argiolus).

We also saw two remarkably small orange tips in one specific location. I am interested to find out whether this is a localised race, or whether they are caused by lack of foodstuffs during the larval stage. The fact that they did not appear to be weak and were flying alongside normal-sized specimens would tend to negate that theory. Any ideas?

This actually brings the species tally to 12 in 48 hours. When you think that there have only been 23 species recorded in Woolsery and the surrounding areas (by me as a youngster, and various CFZ bods in the past six years) and there are only 35 species that even might be in the area according to UK Butterflies who are pretty damned authoratative. We have therefore discounted ridiculously rare and local species, species that only live in Scotland, the Isle of Wight or chalky downs for example, and also the stupidly rare migrants.

An awful lot of my energies over the past twenty-five years, since I first started taking my cryptozoological studies seriously, has been about fluctuations in the species lists of various biotopes where there are thought to be creatures of cryptozoological interest. Some years ago I published my preliminary thoughts about the fluctuating mammal species lists of Hong Kong - an area with more than its fair share of intersesting creatures.

Now, it is about time that I turned the spotlight onto my own figurative doorstep. 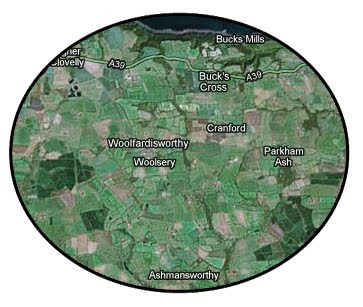 The area that I have chosen as our study area is basically the area over which I used to roam between 1971 and 1981 (when I finally left home). In the last few years we have highlighted it as being an area in which at least three creatures of interest to us live: golden frogs, wild boar and big cats.

Butterfly numbers are markedly down on what they were thirty years ago, with one exception: the migratory nymphalids are far more common. However, our efforts over the past few days have proved that all the species I knew here as a child have survived. The one exception to this is the marbled white (Melanargia galathea), which will not fly until July, and which had a very localised range. We will look for it again then.

This year is an extraordinary one so far for butterflies, and I hope that it will continue to be so. I have a sneaking suspicion that once we can point our sticky little fingers at the cause of these odd fluctuations we will not only have learned more about British butterflies than we did, but also be in possesion of some truths of great importance to Fortean Zoology as a whole.
Posted by Jon Downes at 6:09 PM No comments:

THE LATEST FROM DALE

Most recently at the Frontiers of Zoology Blog:
http://frontiersofzoology.blogspot.com/2011/04/congo-dragons-and-colossal-confusions.html

And Most Recently at the Frontiers of Anthropology, a posting that is Zoologically-related and although it has a bearing on a longstanding theory of mine, this is the first time it has appeared in Blog form:
http://frontiers-of-anthropology.blogspot.com/2011/04/dogs-out-of-africa.html

http://hauntedskies.blogspot.com/2011/04/some-archive-material-from-raf.html
Posted by Jon Downes at 11:24 AM No comments: 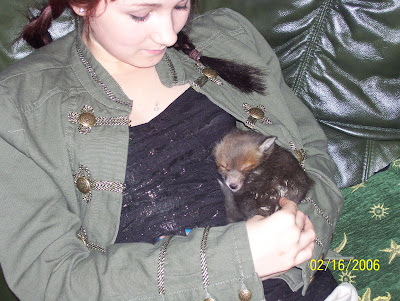 Helen, the CFZ housekeeper (and mum of Emily and Jessica, who are familiar faces to the bloggo readership) had a visit from our friend Beth Tyler-King from Hartland Wildlife rescure, the other evening. She was accompanied by a ridiculously cute baby fox, who made friends with both Helen (below) and Jessica. 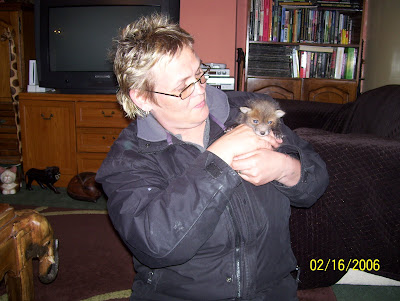 It was me who first dubbed John Hanson and Dawn Holloway's project Haunted Pies...
Posted by Jon Downes at 11:14 AM No comments: 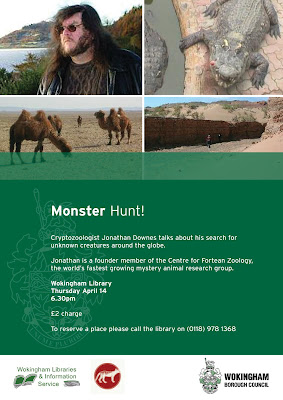 Many thanks to Heather Dyson from Wokingham Library for sending this..
Posted by Jon Downes at 11:03 AM No comments:

Email ThisBlogThis!Share to TwitterShare to FacebookShare to Pinterest
Labels: Lectures

On this day in 1945 Adolf Hitler married Eva Braun before they both committed suicide the next day. There have been numerous conspiracy theories surrounding the events with various people suggesting that the Hitlers were either murdered by those close to them or that they faked their deaths and the burnt bodies found were those of lookalikes, the reality is most likely that events passed as witnesses said they did. Oh and congratulations to Prince William and Catherine 'Kate' Middleton who are also getting married today (as I write YNT the evening before it is posted on the blog lets hope it all goes without a hitch and no tawdry soap opera like shenanigans occur or this blog post will seem in quite poor taste).
And now the news:

Crunchy AND smooth:
http://www.youtube.com/watch?v=bqeGxMgVOHI
Posted by Jon Downes at 10:49 AM No comments:

Regular readers will remember that the other day Graham and I went in search of orange tips - a butterfly species that I hadn't seen in Woolsery for over thirty years. The only specimens that we found were males, and so yesterday Max and I went to see if we could redress the balance. As you can see by the image above left, we did. By the way, all butterflies were released after we filmed/photographed them.

But there was more excitement in store. There were two other species that I had seen in Woolsery as a child, but that were apparently missing when I returned as an adult. These were the Brimstone (Gonepteryx rhamni) and the Small Copper (Lycaena phlaeas). In one afternoon we saw both species. I had last seen G.rhamni in Woolsery in 1972 and L.phlaeas in 1981.

I am not claiming that any of these three species have not appeared in Woolsery in the interim, but only that I have not seen them, and that they have not been reported to me by any of my Natural History spies, like the Rev. Gerald Smith (Retd) who is a tireless photographer of all things great and small in the village and the surrounding areas.

In all, Max and I saw at least 11 species (there were two others that we were not able to identify) in the village yesterday, which considering there have only been 23 species recorded by us since 1971, is not too bad at all. This year is shaping up to be a very exciting one butterfly-wise.