ANDREW GABLE: The Man-Horse of Arkansas

Something for the blog. Note: I don't believe this story at all. But it's neat.

Strange Phenomenon.
“A strange Phenomenon has made its appearance in Van Buren County, Arkansas. Some people call it a horse, while others affirm that it is a man. At any rate, nothing in natural history can account for it. Its head has every semblance of a horse’s, while its body is unmistakably that of a man. When first seen it was standing in a road with its head over the fence, looking intently at a man plowing in the field. There was something so wild in the expression of the supposed horse’s eyes, and such a snap to his eyelids, producing such a peculiar sound, that the man left the plow and went up to the fence. His surprise and terror at seeing a horse’s head on a man’s shoulders knew no bounds, but his legs did, and springing away he ran toward the house. The man-horse, seeing that the plowman “fleed” when no man-horse “pursueth,” climbed over the fence and walked to the plow, took up the lines and started the horse. The owner had witnessed this, having stopped. Gathering courage he went back slowly and cautiously, approaching the most peculiar freak of nature he had ever seen. When he had come within a few yards of the plow, the man-horse stopped, turned, and remarked:

“’You seem afraid of me. Approach.’

The man felt impelled by some unaccountable power, and when he was within a few feet of the man-horse experienced a slight sensation in his feet, and looking down discovered that instead of feet he had a pair of hoofs. He had evidently exchanged with his horse, for instead of hoofs on the front the horse had human feet, and seemed equally as much dissatisfied with them as the man did with the hoofs. After performing this piece of magic the man-horse ran away. It may be necessary to add that the man to whom the phenomenon presented the hoofs is known in the neighborhood as a ‘Guinea nigger’ [i.e., he was a house-servant rather than a field slave]. His plow-horse has not been seen since that memorable day. The man still retains his hoofs, and was last seen at a blacksmith-shop having himself shod. He knows them to be the hoofs of the horse, for there are marks on them that render unmistakable recognition. This story, a neighborhood superstition, does not come in a roundabout way, but down the Fort Smith Railroad, one of the straightest roads in the South. It will not, however, take its place in a library of Sunday-school fiction. It is stated, and with some degree of truth, that the old negro, suffering from elephantiasis, became crazy and started the story.”
Indiana (Pa.) Gazette, September 18, 1879
Posted by Jon Downes at 1:18 PM No comments:

Three people emailed me and didn't understand why the silly cover version of Silver Machine was so funny. So - courtesy of Graham - here is Hawkwind performing it on last year's Christmas tour.

and here is the original hit single (#3 in 1972). However being from the BBC archives, Stacia keeps her kit on...

SALAZAR IS A GLUTTON FOR PUNISHMENT (geddit?)

Email ThisBlogThis!Share to TwitterShare to FacebookShare to Pinterest
Labels: center for biological diversity

CHAD ARMENT PLUGS WHAT LOOKS LIKE A BRILLIANT BOOK 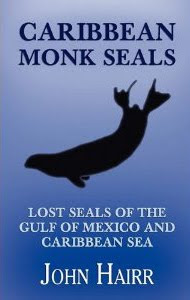 Hairr explores the history of this now extinct (most likely) monk seal, its intersection with various cultures, and expeditions in search of any possible remaining survivors.
More details at:
http://www.coachwhipbooks.com/titles/caribbean-monk-seals.html
Posted by Jon Downes at 1:01 PM 1 comment:


I have just wasted ten minutes trying to embed this video. If anyone can show me how I would be very grateful.
Posted by Jon Downes at 12:59 PM No comments:

THE WIT AND WISDOM OF JOHN ALLISON

As regular readers will know, I am somewhat of a fan of a bloke called John Allison who is responsible for a rather marvellous webcomic called Bad Machinery. He also talks a lot of sense. In a recent interview he said something that actually encapsulated most of what we are doing with this blog:

"People’s attention spans are knackered. The internet has become a Las Vegas casino, a comfortable, noisy area designed to keep you disorientated and keep you spending money. Good luck trying to find attention with longform work. But I think there’s a sense now that we have to push back in the opposite direction, that people don’t want to read articles surrounded by video ads and animation".

On this day in 1773 a ship full of perfectly good tea was thrown into Boston Harbour in an anti-tax protest. Whereas the sentiment behind the protest was quite noble this also had the unforeseen consequence that tea companies would no longer send their best tea to North America, so coffee became the American drink of choice.

A cat playing a piano:
http://www.youtube.com/watch?v=v0zgQAp7EYw
Posted by Jon Downes at 12:10 PM No comments: