LINK: 'Mermaids: The Body Found' Is Like 'Lost Tapes' on Steroids

Mermaids: The Body Found is an Animal Planet mockumentary that takes a look at this hypothetical situation—what if the half-human, half-fish creatures really did exist, and what if man discovered them?

But the show's aquatic beings are nothing like Disney's human-obsessed Ariel—they look more like Avatar aliens with tails or the Harry Potter merpeople and should definitely want nothing to do with humans.

merpeople ended up being sorely disappointed. And hopefully most viewers realized that the show wasn't real by the time it was over—it doesn't seem as though Animal Planet was really trying to fool the public with a modern-day Fiji mermaid. P.T. Barnum popularized the Fiji mermaid sideshow attraction shown in the photo on the right—it was basically a mummified monkey head and torso sewed to that of a fish and covered with papier-mâché.

In Mermaids: The Body Found, researchers for NOAA are investigating whale beachings all around the world. They decide that the Navy is testing a new kind of sonar that's causing the creatures to beach themselves, and while listening to some of the sonar recordings that took place during the testing, they hear what seems to be a new species of dolphin.

The vast ecosystem formed by the Red River watershed on the borders of Texas, Oklahoma, Arkansas and Louisiana affords a habitat comprised of many micro-climates with an incredible diversity and richness of plant and animal life. In many of the deep ravines where the creeks and waterways have cut through the the limestone cap rock, the vegetation has a nearly tropical aspect. Towering, ancient cypress trees form a canopy above the underbrush and thick hanging vines. These ravines are like a primordial oasis, seldom traversed by humans. Often in remote wildernesses, surrounded by thousands of acres of temperate woodlands and meadows. The ravines are a favored living quarters for the Sasquatch or “Bigfoot”
Read on...
Posted by Jon Downes at 3:38 PM No comments:

Posted by Andrew May at 2:01 PM No comments:

So another weekend is here. It is very peaceful this morning because I am the only person awake, and Graham has gone off to see Hawkwind and his mother (not necessarily in that order). It is a glorious summer day, and once again I have risen bright and early so I can get on with the blogs without interruption.

First up this morning is a brief note from Erik Norlander about his new video:
http://gonzo-multimedia.blogspot.com/2012/06/erik-norlander-writes.html

We have a link to a cracking review of Galahad:
http://gonzo-multimedia.blogspot.com/2012/06/link-great-galahad-review.html

And finally, I review a Leonard Cohen reference book:
http://gonzo-multimedia.blogspot.com/2012/06/review-leonard-cohen-book.html

See you tomorrow, which being a sunday will be done in bad poetry. Blimey, has a whole week gone by already?
Posted by Jon Downes at 12:08 PM No comments:

http://cryptozoologynews.blogspot.com/
On this day in 1835 P.T. Barnum's newly established circus embarked on it's first national tour of the United States of America.

One of the travelling exhibits in Barnum's circus was “The Great Unknown” as explained here by Silas Hawkins' enactment of a P.T. Barnum monologue I wrote for the Weird Weekend:
http://www.youtube.com/watch?v=Le_Z4JWkQeg
Posted by Jon Downes at 11:59 AM No comments: 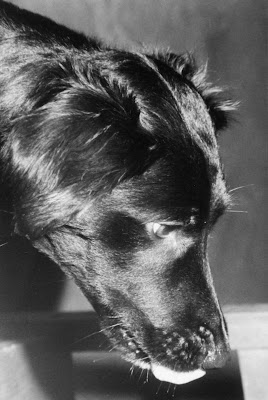 On the first of June 2000, I had Toby, my dear old dog euthanased. He was fifteen and a bit years old and riddled with cancer. It was still possibly the hardest decision I have ever had to make, and not a day goes by when I don't think of him.

Rest in Peace my dear old friend...
Posted by Jon Downes at 11:56 AM No comments:

Is mildly delayed, only because we want Richard to be involved, and he doesn't arrive until this evening. Expect it before the end of the Bank Holiday weekend...
Posted by Jon Downes at 11:50 AM No comments: