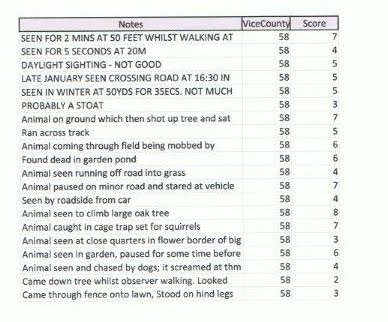 Today I present some information on sightings of pine martens in Cheshire between 1992 and 2009 based on spreadsheet data sent to me about 2 weeks ago from Neil Jordan of the Vincent Wildlife Trust. About 1 week ago I went to the Worsley Woods area of Manchester where a pine marten was seen in 1919 to distribute 50 leaflets asking for any records of more recent pine marten sightings but as of today, Monday August 23rd I`ve heard nothing.

As can be seen from the Cheshire data, the zoological orthodoxy that pine martens have not been seen here for about 80-100 years is simply inaccurate. 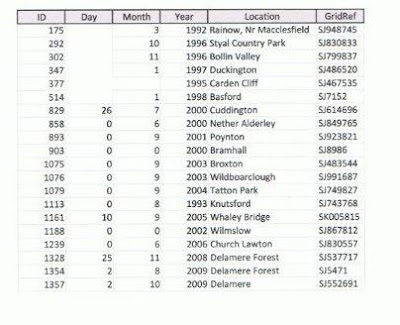 She was walking all alone
Down the street in the alley
Her name was Sally
She never saw it
When she was hit by space junk
In New York Miami beach
Heavy metal fell in Cuba
Angola Saudi Arabia
On xmas eve said norad
A Soviet sputnik hit Africa
Posted by Jon Downes at 11:44 AM No comments:

MIKE HALLOWELL WROTE THIS LETTER TO THE NORTH DEVON GAZETTE 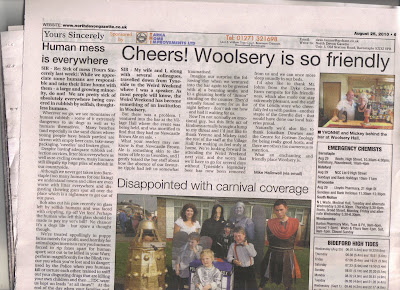 PAUL CROPPER SENT THIS STORY OF A THUNDERBIRD KILLED IN CANADA 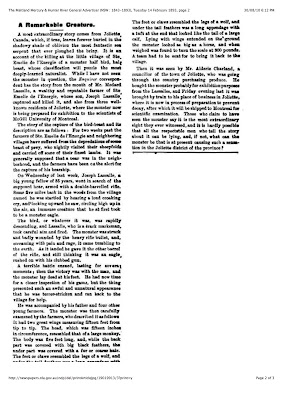 On this day in 1888 Mary Ann Nichols, thought by most Ripperologists to have been the first victim of Jack the Ripper, was found murdered.
And now, the news:

Piranhas feeding (rivers of gore warning) :
http://www.youtube.com/watch?v=ea6DfhkY53c&feature=channel
Posted by Jon Downes at 11:10 AM No comments: