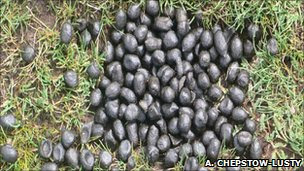 Marketing experts behind one of Peru's major tourist attractions might be about to launch a new advertising campaign with the slogan 'Machu Picchu - It's Made of Poo!'
Not really. Though they should.
The ancient Inca city wasn't strictly made of the brown stuff - I think the buildings are probably traditional stone and similar - but Alex Chepstow-Lusty of the Lima-based French Institute of Andean Studies has been studying the mud in Marcaccocha, a small lake in the Cuzco area, for some years now and his team have found a link between an increase in maize pollen and the presence of excrement-eating mites. Conclusion: farming leads to civilization and the people who became the Incas used llama dung as fertilizer.
The current indigenous peoples, the Quechua, still follow aspects of the Incan lifestyle, which includes using llama droppings for fertilizer and cooking fuel. So in a sense, they like to have their cack and eat off it, so to speak....
Posted by C-E B at 10:54 PM No comments:

THE LATEST FROM DALE

I have gone on and reprinted a sampling of the CFZ blogs on the water horse theory together with a little new material:

And I forwarded a short review of literature on TransPacific pre-Columbian contact as continuing the discussion on connections between ancient India and Ancient Mexico:

Which is a matter that keeps on getting bigger and bigger the more you dig into it.
Best Wishes, Dale D.
Posted by Jon Downes at 7:21 PM No comments:

http://www.youtube.com/watch?v=yLu37VvCozw
Posted by Jon Downes at 1:01 PM No comments:

On this day in 1977 Star Wars was first released in cinemas. There are a lot of stories told about George Lucas's original ideas for the Star Wars films and they differ vastly from the film that he eventually came to make. The first draft of the film featured a 'Jedi-Bendu' space commando called C.J. trained in the ways of the force by 'Mace Windy' (thank goodness for second drafts).

Over on the News Blog Gavin L-W has racked up an incredible 5,000 postings. Well done mate :)
Posted by Jon Downes at 12:44 PM No comments:

TERATOLOGY: Richard Freeman sent us this story about an extraordinary mutation of the Thompson's gazelle

Posted by Jon Downes at 9:48 AM No comments: