We just hit our 900th blog posting at FOZ

THE GONZO BLOG DOO-DAH GIRL PUTS ON HER MAE WEST

*  The Gonzo Daily is - as the name implies - a daily online magazine (mostly) about artists connected to the Gonzo Multimedia group of companies. But it also has other stuff as and when the editor feels like it. The same team also do a weekly newsletter called - imaginatively - The Gonzo Weekly. Find out about it at this link:

www.gonzo-multimedia.blogspot.com/2012/11/all-gonzo-news-wots-fit-to-print.html
* We should probably mention here, that some of our posts are links to things we have found on the internet that we think are of interest. We are not responsible for spelling or factual errors in other people's websites. Honest guv!

THE NEW ISSUE OF ANIMALS & MEN IS BEING UPLOADED TODAY 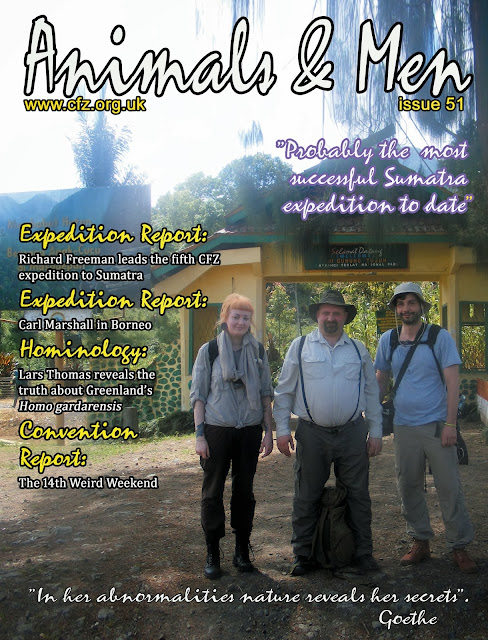 TICKETS FOR WW2014 NOW ON SALE 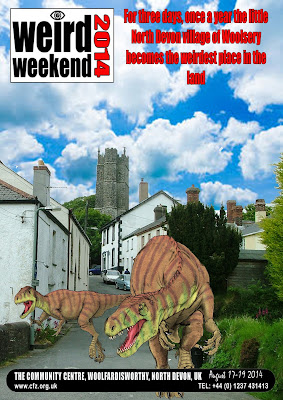 
BUY YOUR TICKETS EARLY TO SECURE A PLACE
Numbers are limited and we would hate you to be disappointed..
CURRENTLY CONFIRMED (WITH TEN MONTHS TO GO)

PLUS
+ Silas Hawkins
+ The Tunnel of Goats


More attractions will be announced soon...

Its belting down with rain. Saw a spotted quoll last night. Turned up more thylacine accounts.Latest was in 2012 by a truck driver in the north-east. Jon McGowan caught a funnel web spider.

Have found two scat samples. Seem to big to be devil or quoll and too remote to be dogs. Apparently there are no wild dogs in this area and very few in Tasmania period. One scat is quite fresh.

Richard
Posted by Jon Downes at 11:18 AM No comments:

On this day in 1948 Barnsley 'the lad' Plumstead became the first man to walk a vole from Lands End to John O'Groats. The vole sadly died from exhaustion at some point near Truro in Cornwall, but Plumpstead was undeterred and bravely dragged the voles rotting carcass the rest of the distance using a system of pulleys with a sock, strategically placed to catch any bits that fell off. His magnificent feet buoyed the spirits of a nation still weary after World War II and the taxidermied remains of both the vole and Plumpstead himself can be seen in the Shropshire International Museum of Natural History to this day.
And now the news:

The city of Truro, where the vole breathed its last:
http://www.youtube.com/watch?v=nDBka4wjsW0
Posted by Jon Downes at 6:00 AM No comments:

The Tasmanian tiger was listed as extinct nearly 80 years ago, but now a team of British naturalists are on the prowl to prove that the species is still alive, the Guardian U.K. reports.

Thylacinus cynocephalus. Credit: Wikimedia
Properly named a thylacine, the "Tassie tiger" is the largest known carnivorous marsupial of modern times. The stripes on its back resemble those of the jungle cat after which it is named. Though the last known thylacine died at Hobart Zoo in Tasmania on Sept. 7, 1936, some believe the animal is alive and well in the island state's remote northwestern region.

The British researchers searching for the species are part of the Centre for Fortean Zoology, based in Devon, England. They claim to have spoken with several credible witnesses who allege to have seen the thylacine. The group is performing a DNA analysis on feces it found to determine if it belongs to the animal, which was hunted to extinction (or possibly only near-extinction) by European settlers for fear it would kill livestock.
Read on...
Posted by Jon Downes at 2:56 AM No comments: Humans may be responsible for the extinction of the West African black rhinoceros and the Caribbean monk seal, but what about the Tasmanian tiger? A team of zoologists is not so sure.
The Centre for Fortean Zoology (CFZ) recently launched a new hunt for the species, which was once endemic to Australia.
The Thylacinus cynocephalus, commonly called thylacine or Tasmanian tiger for its characteristic stripes, was determined to be extinct as early as 1982.
Researchers are now scouring near Smithton on the island of Tasmania, in an attempt to find evidence that the Tasmanian tiger endures. So far, the team has spoken to several locals who claim to have spotted the creature and have submitted samples of animal feces for DNA testing.
Speaking to The Guardian, CFZ Zoological Director Richard Freeman said he has "no doubt" the species still exists. He told the British newspaper:

According to the International Union for Conservation of Nature, the last reportedTasmanian tiger was captured in the wild in 1933 and taken to Tasmania's Hobart Zoo. Believed to be the last of its kind due to the population's decimation by Australian hunters, the animal died after three years in captivity.
Read on...
Posted by Jon Downes at 2:55 AM No comments:

It had been considered extinct for nearly 80 years, but the Tasmanian tiger has been declared alive and kicking by an intrepid group of British naturalists.
A team of investigators from the Centre for Fortean Zoology, which operates from a small farmhouse in north Devon, is currently in Tasmania hunting down clues to prove the thylacine, commonly known as the Tassie tiger, still exists.
The group claims to have gathered compelling evidence of the thylacine’s presence in remote parts of Tasmania’s north-west, despitethe last known animal dying in Hobart Zoo on 7 September 1936.
The Centre for Fortean Zoology said it has talked to several “highly credible” witnesses of the thylacine and has found animal faeces that could belong to the beast. The droppings have been preserved in alcohol and are being sent awayfor DNA analysis.
The cryptozoologist team, which has previously attempted to find the yeti and boasts that has evidence of a mysterious Indonesian ape that walks on two legs, is one week into a fortnight-long trip to discover if the thylacine still exists.
Richard Freeman, zoological director of the organisation, told Guardian Australia he has “no doubt” the species still roams isolated areas of Tasmania.
“The area is so damn remote, there are so many prey species and we have so many reliable witnesses who know the bush that I’d say there is a reasonable population of them left,” he said. “I’d say there are more of them around in the world than Javan rhinos.” The World Wildlife Fund estimates that there are just 35 Javan rhinos left.
Freeman said he had spoken to a forestry worker who had seen an animal in daylight in 2011 which was distinctive because of its striped rear end, long stiff tail and “weird rolling motion, almost like a cow” when it walked.
Read on...
Posted by Jon Downes at 2:53 AM No comments: