Orbi (publications): http://orbi.ulg.ac.be/simple-search?locale=en&query=denoel+mathieu
Posted by Jon Downes at 11:38 AM No comments:

I have this page from a cryptozoology site in Italian but I don't have a good English translation for it. I'll send the link through anyway:

And I have a Babel Fish translation for what I thought was the important part further down:

The Dre-Mo word in fact is used in Tibet in order to define the different variety of tawny[brown] bear, together to " Chemo" , " Chemong" , " Dredmo" and " Dremo". Considered the totally quadruped travelling point, lthe absence of visible heels in the feet, and the way with which the animal was procuring the food, is convinced that it was be a matter of a normal bear.

--This is all very good and pretty definite information: The Dremo is the "Big Hairy Monster" confused with the Yeti that turns out to be a large brown (Blue) bear. Its overall appearance and stance make that much pretty certain.

That is depicted as what the DreMo is like: 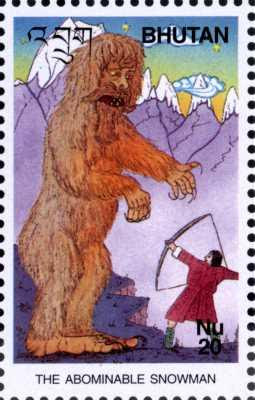 Note the way the forelimbs are held, and the fact that the forepaws have CLAWS. The way the back legs are bent and the line of the back are also typical of a large brown bear. The humanlike face would be the most inaccurate part of the depiction, but seen front-on the face of a brown bear looks a good deal flatter than it really is.

Another striking feature is that this creature is differentiated from what the Tibetan monk wants translated as a "Gorilla", the "Standard" Yeti type. It would seem there is a bigger "Gorilla" and a smaller "Chimp" involved in reports of the type, but it does seem clear that although there is a clear case of complete confusion, there is also a basic distinction in the Native mind between apelike and bearlike creatures.


--Best Wishes, Dale D.
[Standing Bear photo is copyright by Jim Braswell, all others from the originating website but for the stamp, which is presumably issued under the authority of the government of Bhutan. Reprinted for educational purposes and no infringement on any of the copyrights is intended]
Posted by Jon Downes at 11:32 AM No comments: 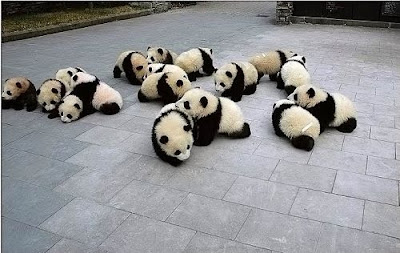 As part of the recent trade agreements between the UK and China, Edinburgh Zoo and the Zoological Society of Scotland have signed an agreement with the Chinese Wildlife Conservation Association to enable them to house a breeding pair of pandas.

This is quite an event because these days China is extremely picky about who gets its pandas, applicants having to satisfy some political requirements as well as the quite stringent ecological ones.

“This historical agreement is a gift to the people of the UK from China,” said China's ambassador to the UK, Liu Xiaoming.

“It will represent an important symbol of our friendship and will bring our two people closer together.”

The chief executive officer of the Royal Zoological Society of Scotland (RZSS), David Windmill, said: “This is a landmark day for RZSS, Edinburgh Zoo, the UK and China.

"It represents the beginning of a programme of research, education and partnership and the project has huge benefit for the UK and Scotland, both in supporting giant panda conservation and in enhancing our programmes in education, science and conservation."

Not everyone is impressed, though. Charity 'OneKind' did not see the merits of having a breeding pair of pandas in the UK. The charity's research manager, Ross Minett, said: “In this day and age, the prospect of two animals being transported from their homeland across the world so that the paying public in Scotland can see them in a cage in a zoo raises serious animal welfare concerns and is outlandish.”

“This is a commercial deal: the animals may appear to be diplomatic gifts - an outdated concept in itself - but in fact the zoo will pay a substantial fee for the lease of these animals.

“The Scottish and UK governments should ask themselves whether their support for this project is really in line with modern concepts of animal welfare and conservation.

“International conservation organisations like the World Wide Fund for Nature favour an approach that protects the panda's habitat and allows the natural population to grow, and if Edinburgh Zoo is serious about conservation it should be throwing its support behind local projects in China.”

I have actually been following this story for a while, though, and can address one of the concerns that Ross Minett raised: the fee he mentioned was actually a donation by the RZSS to help future conservation projects in China.
Posted by Jon Downes at 11:24 AM No comments:

First it was mangy coyotes, now it's rusty alligators:

http://www.dailymail.co.uk/news/article-1345217/Hes-tangoed-Orange-alligator-shows-extraordinary-citrus-hue.htmlhttp://www.heraldtribune.com/article/20110112/ARTICLE/101121038/2055/NEWS?Title=Nokomis-orange-alligator-finds-Texas-twin&tc=ar
Posted by Jon Downes at 11:23 AM No comments: 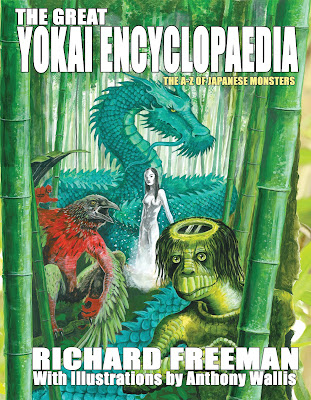 Richard Freeman's new book, The Great Yokai Encyclopedia: An A to Z of Japanese Monsters, is an appropriately Godzilla-sized book (it runs to 416 pages!) and is a definitive look at the strange creatures and beasts of Japan, both in times past and the present day. A wealth of dedication, hard work and diligent study has gone into making this book a triumphant tour de force on one of the most sadly overlooked aspects of cryptozoology, monster-hunting and strange creatures.

Collectively known as the Yokai, the monsters of Japan are largely unknown in the West. But by addressing the cultural background that gave rise to these legends, and then listing the creatures in detailed encyclopaedic form, however, Richard Freeman has now firmly and decisively rectified that situation for one and all.
This is a truly magical title that demonstrates not only Freeman's love and appreciation of Japan's rich folklore, history and mythology of a monstrous nature, but that also reveals his profound knowledge of the subject, too - not to mention his patience in putting the mighty tome together in the first place! Freeman writes in an informative and entertaining style that ensures you'll keep turning the book's pages to learn what is coming next.
I recommend The Great Yokai Encyclopedia to anyone and everyone that wishes to learn more about the fantastic beasts, mythical monsters, unknown animals, and creepy critters of Japan. Winged monsters, dragons, man-beasts, water goblins and much more - they all feature within the packed pages of this book. Invest in a copy and you won't be disappointed!
Posted by Jon Downes at 11:18 AM No comments:

On this day in 1179 the order of the knights templar was given formal approval by Pope Honorius II.
And now, the news:

What happens when birds get drunk? Radical penguins lead them astray, that's what!
http://www.youtube.com/watch?v=bIIErBccChQ
Posted by Jon Downes at 11:17 AM No comments: