Steve Moore ( 11 June 1949- 16 March 2014) was a British comics writer.
Moore was credited with showing acclaimed writer Alan Moore (no relation), then a struggling cartoonist, how to write comic scripts. His career has subsequently been quite closely linked with the more famous Moore – the pair collaborated under pseudonyms (Steve's pseudonym was "Pedro Henry", Alan's was "Curt Vile") on strips for Sounds magazine, including one which introduced the character Axel Pressbutton, who was later to feature in the Warrior anthology comic, as well as a standalone series published by Eclipse Comics.

Read on...
I first met Steve at the inaugural Fortean Times Unconvention in 1994. He was very kind and supportive to me during the early days of the Centre for Fortean Zoology, and we have kept in touch sporadically ever since. The world has lost one of the nicest men I have ever met.

beforeitsnews.com
I have not been one to find much interest in the Big Foot issue for many reasons. I think the biggest reason was that up until now I have not come ...

Bigfoot Evidence: Possible Bigfoot Spotted Near Deer Feeder in Leon, West Virginia
Bigfoot Evidence ⋅ Shawn
Rich believe it's possible that it could be a juvenile Bigfoot. "It is very possible this is a BF. You know they are not born 8-10 feet tall.. The younger ones ...

Photo: Possible Bigfoot - Mason Co., WV | Paranormal - Before It's News
beforeitsnews.com
On the Bigfoot Community FB page, member Rich C. posted the following: Neighbor took this earlier this year, noticed something when she looked out ...

Bigfoot Sighting: West Linn Oregon ? > Bigfoot Buzz
bigfootbuzz.net
My mom took my dog for a walk today and took this video after my dog chased a deer into the woods. Both my mom and my dog had no idea the ...

Bigfoot Evidence: Morgan Matthews Speaks, Did a Bigfoot Really Hit Him? [Rick Dyer Hank Hoax]
Bigfoot Evidence ⋅ Matt K.
The director of the mostly unseen and controversial documentary "Shooting Bigfoot" was recently interviewed at the Frontline Club as he introduced ...

Never thought 'BIGFOOT' was real until Now..? - The Rulers of the World: Interview
The Project Avalon Community Forum ⋅ jackovesk
"On one cold Saturday in Dec 1981 while hunting, a doe ran under my deer stand while she was being chased by a Bigfoot. Little did I know that it

Bigfoot Evidence: Mike Wooley's Amazing Encounter with Bigfoot
blogspot.com
Mike Wooley has one of the most amazing bigfoot encounter stories out there. The details of his story not give credibility to his claims, but tend to make

Bigfoot Encounter on the River in North Carolina [Real Bigfoot ... - Bigfoot Evidence - Blogger
blogspot.com
This week encounter comes from the Blue Ridge Mountains of North Carolina near the Kentucky border. A man and his neighbor discover a site
Posted by Jon Downes at 2:57 PM No comments:

Posted by Jon Downes at 2:52 PM No comments:

*  Jon Downes, the Editor of all these ventures (and several others) is an old hippy of 54 who - together with an orange kitten named after a song by Frank Zappa puts it all together from a converted potato shed in a tumbledown cottage deep in rural Devon which he shares with various fish, and sometimes a small Indian frog. He is ably assisted by his lovely wife Corinna, his bulldog/boxer Prudence, his elderly mother-in-law, and a motley collection of social malcontents. Plus.. did we mention the orange kitten?
Posted by Jon Downes at 12:50 PM No comments: 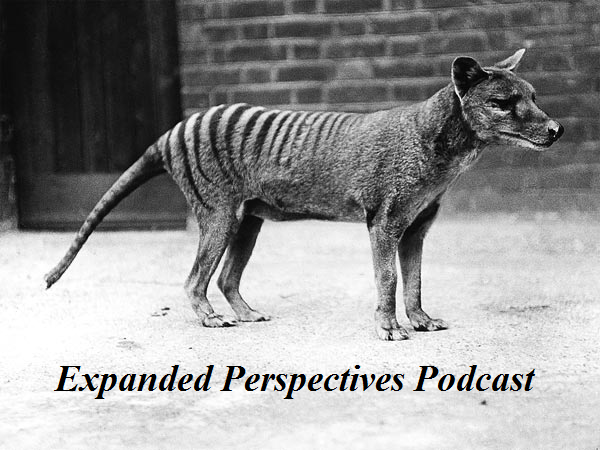 On this episode of Expanded Perspectives the guys talk with Warren Darragh of the Thylacine Research Unit. Warren ‘Waz’ Darragh is an information technology and telecommunications professional who holds a Bachelor of Information Technology degree and a Master of Information Technology (Research) degree. He has over 20 years experience in the implementation of technology solutions – including national and international experience in a wide variety of conditions and climates. Warren served for over a decade in the Australian Regular Army, and is a Graduate of the Royal Military College Duntroon – Australia’s premiere military leadership institution. He saw operational service in Cambodia and in the Former Yugoslavia (Bosnia Herzegovina). Warren’s time in the Army gave both formal training and exposure to living in the ‘great outdoors’. Since that time he has taken every opportunity to get out into the field, where he enjoys honing his skills in camping, hiking, trekking and four wheel driving. Warren has applied his research skills to learning everything he can about the biology, habits, habitats, and history of the Thylacine (Tasmanian Tiger).
Read on...
Posted by Jon Downes at 12:42 PM No comments:

On this day in 1955 the actor Bruce Willis was born. Willis has starred in many films that might be of interest to Forteans such as The Sixth Sense, The Fifth Element and Twelve Monkeys (he likes starring in films with numbers in the title, presumably) he is also one of Richard Freeman's favourite actors.
And now the news:

The Fifth Element is still one of the weirdest and, surprisingly, good sci-fi films ever made:
http://www.youtube.com/watch?v=VkX7dHjL-aY
Posted by Jon Downes at 10:48 AM No comments: