A BIG THANK YOU

Corinna and I would like to thank everyone who has been so kind in thought, word and deed since the sudden and completely unexpected death of our dear collie Biggles on Tuesday morning. Life is hard without him but at this point in our lives there are only two things that we can do.


We could do what other pet owners of our acquaintance have done and commit a sort of emotional suttee, turn our house (and this blog, and OTT) into a memorial to the little fellow, and allow ourselves to be overwhelmed by our grief, or we can take the grief, grok it in its fullness, and move on, hopefully the wiser and the better for the experience. Apart from the unfortunate occasion with the Fire Prevention Officer's ankle, knowing Biggles was a positive experience and he enriched our lives for the short time we were priveliged to know him.


So forgive us if we have the occasional lapse into sentiment, and dwell upon him from time to time, but we will - I promise - do our best to move on...
Posted by Jon Downes at 7:57 PM No comments:

Email ThisBlogThis!Share to TwitterShare to FacebookShare to Pinterest
Labels: biggles

http://cryptochick.blogspot.com/2010/10/goodbye-biggles.html
Posted by Jon Downes at 7:55 PM No comments:

In a week of such sad news it is good to be able to announce something positive. In June 2011 Lightning Source will have a manufacturing facility in Australia so for the first time our books will be available Down Under. Jolly good news, or perhaps I should say, fair dinkum cobbers.
Posted by Jon Downes at 11:01 AM No comments:

RICHARD FREEMAN: Daemons of the Dreamtime #3

PART 3: THE NARGUN
This female monster was a dangerous living stone that could magickally bounce back weapons such as arrows, spears and boomerangs at its attackers. It lived in a cave behind a waterfall in what is now Mitchell River National Park, Victoria. It was said to drag passers by into its den.

The cave was considered a special place for women of the Gunai tribe, and in reality was used for women's initiation and learning ceremonies. The Nargun may have been a way of keeping unwanted men away from the area.
Posted by Jon Downes at 11:00 AM No comments: 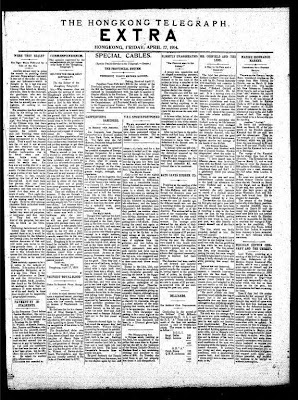 Folks, today I`m bringing what I believe to be one of the strangest animal stories from Hong Kong and we (Jon and I) have found quite a few oddities from the former Colony.

The tiger story followed by a tale of the Sea

Another animal story is going the rounds in yachting circles just now. Some animal-certainly it was not of the order of fishes, says our informant-which is thought to be a seal was seen between the Soko Group (1) and Cheung Chau Island on Monday (2) afternoon.Seen by the Telegraph, the gentleman who saw the animals, which he is of the opinion were seals, put the number that he actually saw at about eighteen, all making in one direction.

His attention was first called to them by his sailing boy on his yacht who remarked on the number of “sea-dogs” or “sea-pigs” that being the translation of the Chinese term,that there were in the water. Our informant looked but could see little at first because the animals were only just breaking water with their noses to obtain air, this being accompanied by a hissing noise. Then a small one jumped into the air and it was at once seen that, whatever they were, the passers by were not fish. Further confirmation was to be found when one of them broke water and raised his head so that he could be easily seen. His face was not unlike that of a cat with drooping whiskers over the mouth. He then dived and showed a large portion of his back as he went down;in fact,roughly speaking, five feet of his body was exposed. In all there were four persons who saw these animals – two Chinese and two Europeans and they are all convinced that they were of the nature of seals. That night the yacht was anchored in the locality and the hissing could be heard all night. However after passing Adamastor Rock (3) no further traces of them were seen.

In answer to a query as to whether they were not porpoises, our informant said they were not. They had not the colour of the porpoise, but were black, as black as the Chinese pig.

Continuing, he informed us that if indeed they were what he suspected them to be, it would be a serious look out for the fisheries near Cheung Chau, for seals were voracious devourers of fish and could make sore havoc in the fishing grounds there. A question as to whether seals would be found in this latitude drew the response that the yachtsman had known of them as far south as California [this is a rather obtuse statement. California is around 40 degrees North,Hong Kong is about the same latitude as the Tropic of Cancer i.e. c.22 N-R]

There certainly appears to be a seal native to the latitude of California. It is spoken of in the Encyclopaedia Brittanica, as is (?) a sea lion. There is the (?) California or Eared Seals and the Macrohinus a species of which, the M.Lenoina,(4) also found on the Californian coast, tending to show that the appearance of some member or other (?) of the seal family in these regions should not be impossible for geographical reasons. (5)

If anyone has the time and inclination to look through The Marine Observer journal from whenever it started there may be more references to South China Sea seals, who knows?

EDITOR'S NOTE: There are four species of seal known from China, but all are confined to northern waters.
Posted by Jon Downes at 10:48 AM 2 comments:

THE GOOD DOCTOR IS IN CORNWALL NEXT WEEK 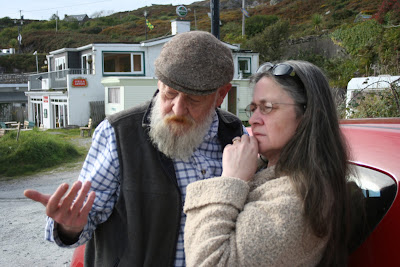 Tony Shiels rang late on tuesday night. He will be in Cornwall next week, and - hopefully - we shall catch up with him. Both Corinna and I are very fond of him, and it will be lovely to see him again...
Posted by Jon Downes at 10:45 AM No comments:

On this day in 1849 Edgar Allan Poe, the American author and poet responsible for several classic horror and suspense stories and the creator of the detective story, died. The cause of Poe's death are unknown but it seemed to have involved some sort of delirium and people have speculated upon a number of possible scenarios including rabies, poisoning, alcoholism, hallucinogenic drug use or cooping (when people are forced to vote several times over for the same candidate in an election changing clothes each time and being plied with alcohol).

After Poe's death another mystery was soon to begin, where, since 1949, on the date of Poe's birth an unknown man toasted the memory of Poe with a bottle of Cognac and left three red roses on the author's original grave site. The original Poe Toaster, or at least a long running Poe Toaster died in 1999 and the duty was passed on to his son according to notes which were left with the toast. Since the torch was passed however the new Poe Toaster is thought to have shown poor respect for the tradition, often leaving banal notes about sporting events or with needlessly jingoistic content which had nothing to do with Poe and didn't even show up in 2010. One hopes that this fine tradition will be continued in the proper manner and if the new Poe Toaster doesn't much care for this tradition that he will pass it on to another person rather than just let it die out.
And now, the news:

Miss a chance to post a vid of the Family Ness? Stuff and nonsense! Watching this show when I was about 6 is what first got me interested in monsters and cryptozoology in the first place and even after all these years the cartoon still holds up well. You'll notice lots of little visual gags in the background if you watch closely enough, like the car numberplate of the guy who spots the Nessies in this episode for example, too. At Weird Weekend Silas Hawkins was good enough to sign a copy of a Family Ness book I had on behalf of his late father Peter Hawkins who provided most of the voices for the show.
The Family Ness: Episode 1
Posted by Jon Downes at 10:45 AM No comments: