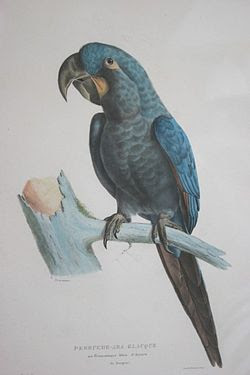 Argentina has for many years had a reputation for hidden things; for a long time it was Nazi war criminals and then it was thousands of people disappearing in the 1970s. Aside from all that there are a number of mystery animals to be found within its borders. Given the task of choosing one cryptid from the country I have plumped for a bird, the glaucous macaw.

A member of the parrot family, the glaucous macaw was, as its name suggests, a turquoise-blue colour with a greyish head (glaucous meaning of a pale greyish- or bluish-green colour). It measured 28 inches with a long tail and a large bill. First scientifically described in 1818 by Louis Viellott, the glaucous macaw would not have much of a recorded history with the last confirmed example dying in London Zoo in 1912. There was another one that allegedly survived in Buenos Aires Zoo until 1936 and with the death of this bird the species was officially declared extinct. Habitat destruction was noted as the cause of the extinction. The bird’s primary food source was the nuts of the Yatay Palm, which has been subjected to widescale felling. But like any good cryptid an official extinction isn’t really the end of the story: there are still reports of sightings taking place in a number of Argentine provinces and so it may only be a matter of time before the glaucous macaw is rediscovered.

Where next? Well, how about a swim across the River Plate to Uruguay.
Posted by Jon Downes at 12:19 PM No comments:

NEIL ARNOLD: Notes From The Field Magazine Part One

Over the next few months I’ll be posting a few interesting snippets from old volumes of The Field magazine. Here are the first few:

A WHITE JACKDAW - 21st July 1855 – A specimen of this rare variety – one almost wholly of white colour, the only exception being a little black on the wings – was shot on Monday, last week, by Me. Allan Mains, of Glassaugh, Scotland. The bird, we believe, had been seen in the neighbourhood for some time previous, and being a rather conspicuous looking object, it became, as a matter of course, a marked curiosity – Banff Journal

A REMARKABLE LARGE OTTER – 27th October 1855 - Was taken last week in the river Dee, between Llangollen and Corwen. It measured four-feet nine-and-a-half inches from the snout to the end of the tail, and the body was singularly marked with white spots.

STRANGE FISH – 23rd May 1847 - Last week, a most extraordinary fish was caught alive in Holyhead bay. It was nine inches long, an inch and three quarters its greatest breadth, and conically shaped. It had no fins or scales; large eyes, which covered the whole upper part of its head, and “feelers” or prongs, the length of its body. It neither resembled a lobster, crab, nor any kind of shell fish seen on the coast. It is quite a curiosity.

SHARKS ON THE COAST OF IRELAND – 13th October 1855 - The fishermen of the coast declare that they have seen several of these monsters of the deep on the coast of Achil Head and Clare Island. Last week a boat proceeding from Achil towards Newport laden with turf, and having a crew of two men and one woman, was suddenly capsized, and the woman was drowned, the men having held on by the boat; the peasantry declare that the boat was upset by one of those leviathans of the deep, and that the woman was carried off.

KITTEN SWALLOWED BY A COD – 8th September 1855 – A correspondent in Kirkwell alludes to a recent notice in our Stromness news of a rabbit’s leg being found in a ling’s stomach, and adds of his own knowledge something more wonderful, being nothing less than the discovery of an entire kitten in the stomach of a cod caught not long ago in Kirkwell Bay. These facts show that fish in general are not particularly fastidious in the selection of their food – John O’ Groat Journal

A SNAKE IN THE RAGS – 8th December 1855 - In July last Messrs G. and J. Bush, merchants of Bristol, warehoused a quantity of rags, ex the Seringapatam, from Melbourne. As some of these rags were being removed, the men engaged were somewhat alarmed by the appearance of a large snake upwards of four-feet in length, which, however quickly among the rags again, and is at present concealed in the loft. The Seringapatam was upwards of 100 days on her passage from Melbourne, so that the snake must have been about eight months ensconced in the rags. The creature when disturbed appeared quite lively, but it is not known whether it is a venomous reptile or not – Times
FOSSIL DOG – 14th February 1857 - At the meeting of the West Riding Geological Society, Mr Denny read a paper, entitled ‘Notice of the skull of a dog exhumed from the Alluvian Gravel in Norwich, in 1851’. The skull, which is regarded as unique, was obtained from the discoverers by P. O’Callaghan, Esq, and recently presented to the museum of this society, by that gentleman. The question appeared to be, whether the skull was that of a dog or of a wolf; and Mr Denny, after going carefully through the distinctive features of the skull, and comparing it in detail with the characteristics of the skull of a young wolf in the museum, came to the conclusion that it was the skull of a dog, of a greyhound species. He had no doubt of its being a fossil, from its weight, which was 17 ½ oz, whilst the skull of the wolf weighed only 7 ozs. Although there was no record of the discovery of the fossil remains of dogs in the superficial deposits, yet there was no reason why such remains should not be found, as well as those of the wolf and the hyena – the dog being, in all probability, as old an animal as either the hyena or the wolf.

LARGE SALMON – 4th April 1857 - On Wednesday we had an opportunity of examining one of the largest fish we have ever seen, which was caught in the Tweed at Horncliffe, and was exhibited in Mr Young’s window in Bridge Street. In a kelt state it weighed 37 lb and measured 50 inches in length, and 25 inches in girth. When in a clean state it must have weighed close upon 50 lb – Berwick Advertiser

LARGE PIKE AT KILCONQUHAR – 4th April 857 - A pike of a very large size was caught in the loch on Wednesday last week, by Mr Farnie. Its length was 3 ½ feet, girth in the middle 18 inches, and its weight nearly 19 lb. There are great numbers of pike in the loch, but the one at present taken by Mr Farnie is the largest that has ever been found.

MONSTER GOSLING – 25th April 1857 - Sir, a strange brute was brought to me this morning. It is a gosling with four perfect legs, the front ones being set on in front of the wings, and the others set further back than natural. It had no upper part to its beak, and is a female bird; and was, I believe, born alive, but was dead when it came to me. Thinking it might interest some of your numerous subscribers, I made a rough pen and ink drawing of it – T.P.D. – A sketch of this gosling can be seen at the Field office – Ed.

PORPOISES IN THE NITH – 23rd May 1857 - On Monday last, upwards of a dozen large porpoises were seen tumbling in the tide, a little below the New Quay. The appearance of this fish in our waters being very rare, a considerable number of people turned out to witness the unusual spectacle. As the porpoise feeds in a great measure on young herring, their appearance at this season in the Nith leads to the inference that herrings are not far off – Dumfries Courier

WILD CATS – 2nd May 1857 - Among the livestock carried south from Thurso by the Sovereign steamer on Thursday last, were two wild cats, which were lately caught in a trap in Sutherland. Both animals were of considerable size, and in fine healthy condition, notwithstanding a long journey by the road. They were sent south in a well-bound cage, under charge of a keeper, and are intended, we believe, for one of the metropolitan zoological gardens.
Posted by Jon Downes at 12:18 PM No comments:

REDFERN HAS A HELL HOUND ON HIS TRAIL

For centuries the ghostly black dog, or Devil Dog, has been an integral part of British folklore, mythology, and the world of monster-hunting. Generally described as being much larger than any normal hound, its coat is utterly black, its eyes blaze like fiery, red-hot coals, and its appearance and presence is often perceived as an ominous precursor to disaster, tragedy and death. In other words, the black dog of Britain is suspected by many of being a definitive Grim-Reaper.

And just in case the headline passed you by:

MORE ON THE DIE-OFFS

Did the ancient Egyptians know of pygmy mammoths? Well, there is that tomb painting.

A fascinating article by Dr Darren Naish
http://scienceblogs.com/tetrapodzoology/2011/01/ancient_egyptian_pygmy_mammoth.php
Posted by Jon Downes at 12:10 PM No comments:

SPRING IS NOT HERE YET BY ANY MEANS, BUT IT IS IN SIGHT 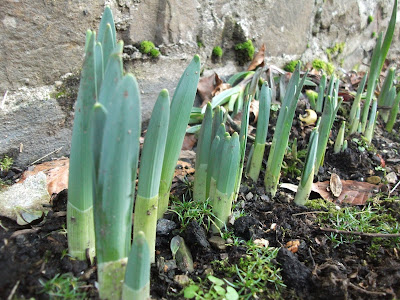 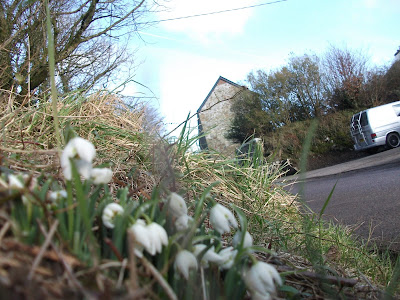 On this day in 1897 Elva Zona Heaster was murdered. The case is interesting because at the trial evidence was used that was allegedly provided by the victim's ghost, for the full story go here:
http://en.wikipedia.org/wiki/Greenbrier_Ghost
And now, the news: