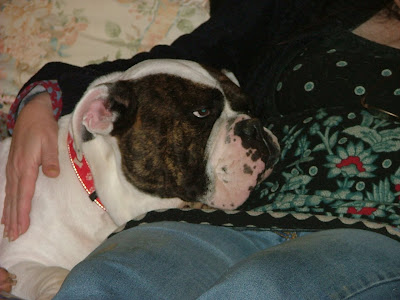 We are fostering a 5-year-old bulldog/ boxer cross who was rescued from a puppy farm. She has been through a horrid time for most of her life so far and is not in the best physical condition. She has already decided that she adores Corinna and follows her everywhere around the house.

Neither bulldogs nor boxers are known for their longevity and both breeds are known for health problems, so we are probably in for a bumpy ride with her, but she is a darling dog and deserves a few years of being a house pet after a lifetime in a concrete cage. 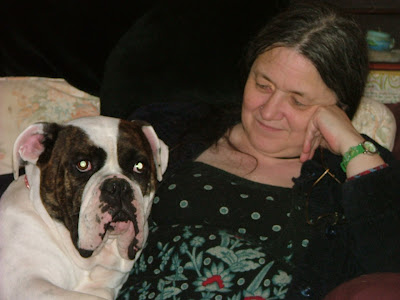 We haven't named her yet although several names, including Prudence, have been mooted. We don't even know whether we shall be able to keep her although early signs are, one has to admit, encouraging.

ENCOUNTERS WITH A FAMOUS RHINOCEROS

Over on the Fortean Times site, our old mate Jan Bondeson writes:

In 1998, after attending a meeting at a London hospital, I went to have a look at a street market nearby. In a stall for old newspapers and magazines, I was surprised to see two old prints of rhinoceroses, one of which had a curious inscription dated 1752. I had no particular interest in these animals, but the magpie tendency asserted itself; confident that these prints would come in handy one day, I purchased them for £10....

MUIRHEAD`S MYSTERIES: WERE THERE WOLVES WITH STRIPES IN HONG KONG IN THE 1930s? 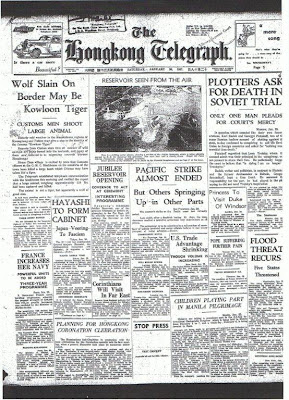 Yes, “were there wolves with stripes in Hong Kong in the 1930s?” I am not misusing some obscure Chinese medicine; nor is this an early birthday present to myself (yes, fans, I am 44 on November 5th) Strictly speaking the article does not say it was a wolf with stripes, but for some reason we have a tiger-like wolf.

Here is the story from The Hong Kong Telegraph January 30, 1937:

Wolf Slain On Border May Be
Kowloon Tiger

Bitterly cold weather in the mountains regions of Kwangtung and Fukien may give a clue to the identity of the famous “Kowloon Tiger”.

Reports from Canton state that all manner of wild animals are being forced into the lowlands, and many of them are believed to be migrating towards warmer Hong Kong.

Shum Chun village is excited by news that Customs officers at the C.M.C blockhouse on the outskirts of the town have killed a large beast which Chinese may have taken for a tiger.

The Telegraph established telephonic communication with the blockhouse this morning and verified the report that a large animal, weighing approximately 110lbs. had been captured and killed.

The animal is not a tiger, but apparently a wolf of good size.

It had been prowling around the blockhouse for two or three days and is believed to have migrated from Fukien.The animal is said to resemble a tiger when seen at a distance. Several wolves have been shot at different periods in Hongkong territory [there were reports of sightings of wolves in Hong Kong territory during the building of the Kowloon-Canton railway from 1905-1910-R]

We are informed by the Inspector General of Police this morning that investigations have been made in the New Territories regarding the reports, current for many days, that a tiger has killed two people in the neighbourhood of Taiwaichuen village, and that the story has been found to be completely without foundation. No tiger has been reported in the vicinity, nor have any reports been received by police of deaths or injury to any person. (1)

There are one or two points here: what were the migrating patterns of Chinese wolves? Fukien (Fujian) province is several hundred miles N.E .of China. Also, to quote Dale Drinnon in answer to my question as to whether there were any reports of wolves with stripes in Asia: “No, but there are hyenas in Asia and hyenas can present appearance. Say “ Wolves with stripes” and most Cryptozoologists are conditioned to think “ Thylacines”. I need to have more information that you have given me to suggest going down THAT route.” (2) Dale wanted me to emphasise this declaimer that he has up to now ( 6.35pm Tuesday 2-11-10) not read this report.

A question dated January 2010 on Yahoo! Answers by Wolf-lover “ Do you get wolves in China?” was answered by nurnord (sic) Best Answer: “ Absolutely there are isolated population pockets of the Grey Wolf across south-west, western and the entire northern region of China” (3)

A report titled ` Report on New Territories 1899-1912` commented: “ A few small wolves still survive among the hills occasionally descending to commit depredations in the farm yards. (4) Is this the behaviour of a dhole, or even a thylacine?!

Taiwaicheun is between Sha Tin and Lion Rock 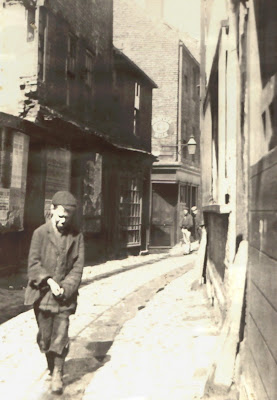 On May 27 1856 a woman sat near a location known as Comical Corner in South Shields. Naturally this caused considerable outrage, for in Geordieland women are not allowed to sit down, but instead are supposed to busy themselves with tasks such as the polishing of coal and the repairing of long johns. In this case, however, the lady in question was spared the customary horrific punishment – banishment to Sunderland – because she was found to be gutting a haddock for her husband's supper. Her industriousness saved her neck.

Now as she removed the intestines of the fish – which, traditionally, are kept and used in the ancient Geordie divination technique called filletomancy – a truly curious thing occurred. A glint caught her eye (she only had the one) and there, nestling in the innards of the haddock, were two golden earrings.

Oh, I know, we've all heard these stories before, about people who cut open fish and find everything from mobile phones to false limbs inside them. Fish swallows stuff, person guts fish and find stuff; its no big deal, really. But how the hell did the haddock in question manage to swallow two golden earrings? Were they joined together for safekeeping? If not, how did the fish manage to swallow two earrings at once? Surely, as soon as they entered the water they would have separated. Unless, of course, both fell to the sea bed and were found and devoured by the same fish.

This must definitely be the Fortean equivalent of “Buy One Get One Free!”

I fancied tracking down the woman and interviewing her, but more than one colleague has suggested that as the incident occurred in 1856 the fishwife in question is unlikely to be alive. They're probably right, as the life expectation of Geordie women is 26, or 14,000 pasties, whichever comes first.

The local paper, The Shields Gazette, covered the story but the earrings were never claimed.
Posted by Jon Downes at 11:51 AM No comments:

While we wait for the next dispatches from India, Oll Lewis tells the story of the last hunt for this particular cryptid.
Posted by Jon Downes at 11:45 AM No comments:

On this day in 1970 the “feral child” known as Genie was discovered by the L.A. authorities in the U.S.A. The case is perhaps one of the most shocking child abuse cases that has ever come to light where the victim actually survived. http://en.wikipedia.org/wiki/Genie_%28feral_child%29
And now, the news:

I'll just leave this here:
http://www.youtube.com/watch?v=5iUMWy4hqAg
Posted by Jon Downes at 11:43 AM No comments: