Bob Skinner kindly sent me the following link which reports on unlikely hybrids,though on this occasion there is a photograph taken in Georgia, U.S of a horse-deer cross. There is also a quote from the Edinburgh New
Philosophical Journal (1827) mentioning such a hybrid in Berlin and Gerald of Wales mentions a deer-hybrid in the 12th century in his Journey through Wales. .

The bottom of the two links,above,is about jumarts, cattle crossed with an ass or horse, including a drawing of one in France in 1766 and a photo of the skull of one in the holdings of the French National College of
Veterinary Medicine.

This site:
http://www.macroevolution.net/cat-rabbit-hybrids.html#.VAcfKcJdVOI  concerns
the who cat-rabbit hybrid debate, including videos.

Topix
The photo which started it all: a photo that Maggie Cruikshank posted on Facebook, which shows what she believes to be the footprint of a bigfoot ...
Posted by Jon Downes at 12:15 PM No comments:

THE GONZO BLOG DOO-DAH MAN TO THE RESCUE

*  Jon Downes, the Editor of all these ventures (and several others) is an old hippy of 55 who - together with an infantile orange cat named after a song by Frank Zappa puts it all together from a converted potato shed in a tumbledown cottage deep in rural Devon which he shares with various fish, and sometimes a small Indian frog. He is ably assisted by his lovely wife Corinna, his bulldog/boxer Prudence, his elderly mother-in-law, and a motley collection of social malcontents. Plus.. did we mention the infantile orange cat?
Posted by Jon Downes at 12:13 PM No comments:

THE CRYPTODANE: The loneliest spider

To most members of the general public, as well as newspaper reporters and other lower life forms, cryptozoology is all about hunting for monsters – and the bigger and more scary, the better. Every now and then, an alien big cat can be included, especially if somebody has been scared out of their wits, their dog has disappeared, or they are now to frightened to go outside. In a pinch, a supposedly extinct animal can be included, but there has to be something special about it, and of course dinosaurs are the best. This is all well and good, but they are also missing out of a considerable part of the action. Cryptozoology is about animals that are unexpected in some fashion. There is no size criteria involved. This is why I have become increasingly interested in what I have dubbed microcryptozoology, i.e. hunting for unexpected invertebrates and other forms of small fry. And the best thing is, anybody can do it. You could f.inst. do worse than spend part of your spare time hunting for a companion to the world’s loneliest spider (or maybe not the world’s, but then at least Denmark’s loneliest spider). 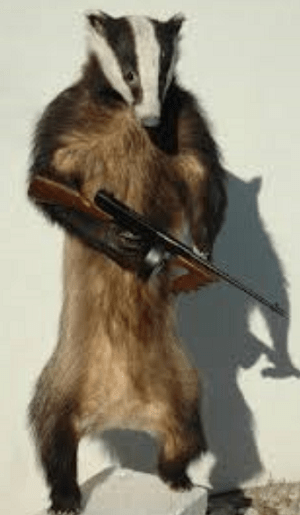 Revenge? Moi?
Increasingly concerned at the impending threat of the Ebola virus, badger community leaders have called for the introduction of a human culling programme.
“We’re proposing an initial pilot programme,” Furry Rita told us yesterday, “by having marksmen to shoot the pilots of the planes that seem to be bringing in the virus into the country. The pilots may not have Ebola themselves, but they are obviously carriers so need to be eliminated for the good of everyone else.”
“Of course we’ve no idea how much humans spread Ebola,” continued Rita, the co-leader of the Harold Woods badger colony, “but vaccinations are too much hassle, so it’s much easier to shoot some as an experiment and then we can see what effect this has on the rest of the population.”
Fellow badger leader Manky Kevin warned that further slaughter may be necessary, but on the plus side he stressed that it would be scientific and humane.
“Moving on, we’re proposing a broader cull but can assure people that it will be conducted scientifically,” he said, stereotypically wisely. “So we suggest that the cull is restricted to a geographical region around Heathrow, let’s say Middlesex to start with. Once we’ve wiped out a couple of million, we can take stock.”
Read on...
Posted by Jon Downes at 10:58 AM 1 comment:

ON THIS DAY IN 1832 - Joseph Smith, III, was born. He was the first president of the Reorganized Church of Jesus Christ of Latter Day Saints. He was also the son of Joseph Smith, the founder of Mormonism.


AND TO WHISTLE WHILE YOU WORK... (Music that may have some relevance to items also on this page, or may just reflect my mood on the day)
Posted by Jon Downes at 7:32 AM No comments: