DAVID MARSHALL: ROCK-POOLING AND LOOKING FOR THE SHONEY?

The morning of Sunday 12th September was absolutely beautiful as our next Twinning event took a small band of members from STAMPS and Ryedale A.S. to the pier at South Shields for a very special morning. 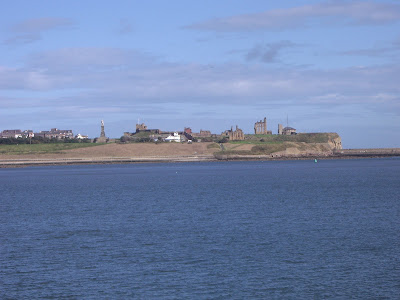 On such a clear morning the view over the bay from South Shields pier to Tynemouth Priory was stunning.

Paul Barrow had organised a rockpool trip and had gone to much trouble making sure everything was right, including health and safety aspects, for what would be a very interesting ‘creature hunt’. 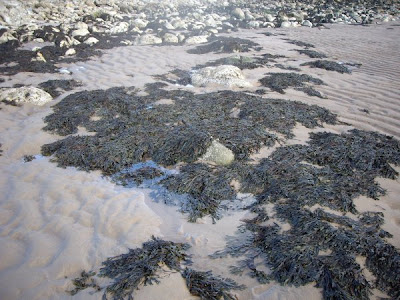 The mounded area around the pier is dotted with rockpools and, as we would find out, many of the rocks here are well anchored into incredibly soft sand. For such a large stretch of beach things were incredibly quiet so only passing Swans and aircraft distracted from our task. 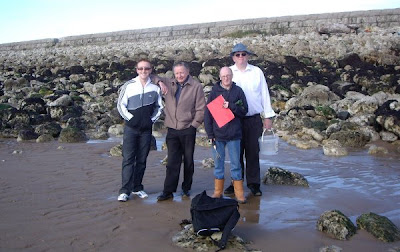 Our task was not easy as we enthusiastically raked through watery sand and turned over rock in pursuit of whatever creatures lurked in the pools. After much searching we managed to uncover a couple of small fish, several Crabs, a living Starfish, large shells complete with occupants and brilliantly coloured red anemones. All of creatures we had found were carefully placed back into places of safety. 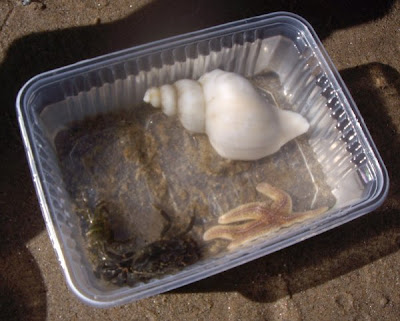 Some of our ‘creature catches’

For the second part of our morning we conducted a survey of seaweeds found both in the rockpools and upon the beach. We had hoped to record 13 species and note their preferred environment and how abundant these species were? We found several of the targeted species but Paul was disappointed, and concerned, that we were unable to record all 13. 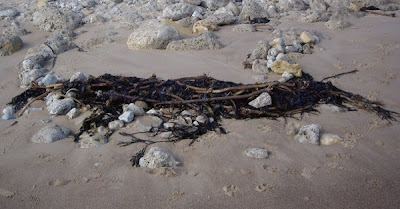 Seaweed on the beach.

Finally, we conducted a survey of how many Limpets could be spotted in 60 seconds.

The two surveys were not conducted light heartedly and the information they revealed will be forwarded to the British Museum of Natural History as part of their national survey - the results of which you can find upon their website.

As we said our ‘see you soon’, and the STAMPS members departed for home, our day was not quiet over. STAMPS member Bede Kerrigan took Sue, Mark Lyons and myself down the coast towards Whitburn. This gave us the chance to visit the infamous Marsden Bay. As readers of The Aquarium Gazette CD magazine are aware (through the excellent article on modern day Sea Dragons submitted by Richard Freeman for Issue 15) this Bay is alive with grizzly stories and has witnessed more sightings of the Shoney (a mythological/unknown water serpent) than any other area of the Sunderland coastline. You would be extremely lucky to see the Shoney but what you do find are amazing rock formations and a pub/café (with an amazing history) built into the cliff face. Our thanks to Bede for taking the time to show us around some beautiful coastline. 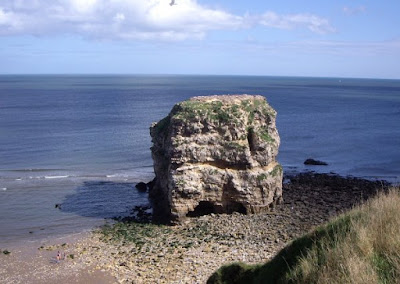 A rock formation at Marsden Bay.

The great thing with ‘Twinning Days’ is that they allow you to have wonderful times like today and cement friendships. Thank you to Paul and his fellow STAMPS members for the wonderful day we had.

A day or two ago I was looking up `Old Chinese Natural History Records` on Google, or words to that effect when I came across a web site: http://www.orthodox.cn/localchurch/200406ancientcnhist_en.htm The web site is a long discourse on Chinese knowledge of Genesis and to my pleasure I found an account of a flying snake-like animal which strongly reminded me of Namibia`s flying serpent.The interesting part (for cryptozoologists I mean) is as follows:

“Here`s an interesting story, which indicates that a few winged dinosaurs may have survived in China into relatively recent times. At the end of the 19th Century, a Russian Orthodox saint named Saint Barsanuphius was stationed in Manchuria to pastor the Russian soldiers during the Russian-Japanese War [10 Feb1904 - 5 Sept 1905-R] From there he wrote in his journal: “ I happened to hear from soldiers that stand at the posts at the Hantanza station, forty miles from Mullin, that two years ago they often saw an enormous winged dragon creep out from one of the mountain caves. It terrified them, and would again conceal itself in the depths of the cave. They have not seen it since that time, but this proves that the tales of the Chinese and Japanese about the existence of dragons are not all fantasies or fables, although the learned European naturalists, and ours along with them, deny the existence of these monsters.But after all anything can be denied, simply because it does not measure up to our understanding”.(1)

There was a Barsanuphius who died at a monastery at Optina in central Russia in 1913-this is probably the man. Does anyone want to investigate this with me and write it up? Perhaps his journal is mentioned on the Net? I`m about to find out!

Another story (and this is Part One) is from The China Mail February 21st 1925 is of a living Hong Kong unicorn! Supposedly. No I am not drunk on rice wine, read on-

Frog deity who angered a Goddess

Although famed abroad chiefly for its shipping and its commerce, Hong Kong is also a place of supernatural wonders. How many local residents know for instance, that the Colony posseses –chained to the City Hall itself! – a terrible monster which would spread its freedom o` nights devouring policemen and their dogs were it but given the chance – which has, indeed, already made one such ghastly meal? Likewise, how many people here know that crawling painfully up the Peak is a deified Frog Rock which once had its face smacked by a Goddess and is now doing terrible penance for its sins? Yet it is so. Verily!

[The Frog Rock is Part Two of this blog. Frog Rock reminds me of Amah Rock, a rock above Kowloon in the shape of an amah, or female servant, holding a baby-R]

“Europeans will laugh when told that the unicorn on the Royal coat-of-arms outside the top of the City Hall (facing the Supreme Court0 can take actual animal shape and rove about at night. But it does.Oh yes. Years ago before the era of electric and gas lights in this island of Fragrant Streams, a European sergeant was patrolling with his dog when the ferocious monster came down and ate the dog and then the master, after the latter had tried to beat it back with his stick. At least this much is vouched for by a story among the Chinese. That the story is given more credence than a mere legend is evident from the fact it is not only related to naughty children by their amahs, but that even today there are many Chinese, common-sense and business sagacity despite, who placed implicit faith in it. Should arguments- backed up by explanation of what the coat-of-arms denotees – be attempted, supporters of the fable will only pour out a torrent of sarcasm concerning new-fangled ideas. “Why” they will say” just go and look at the `horse` and you will see a real iron chain round its neck secured to the wall. The lion opposite to it was borrowed from the set at the base of the fountain outside the other side of the City Hall (since replaced by another one) and with the aid of protective gods, was given the spiritual power with which to exercise a restraining influence over the recalcitrant horse.”

People who have been in the interior of China for long will know the purport of the two awe-inspiring images outside the doors of big houses. These are the doorkeeper deities and it is commonly believed that, especially in the case of those which face East, the early morning`s sunrays have, in course of time, converted the images into actual gods which take human form at night. Armed with a deadly weapon, they are claimed to have harmed those who would dare approach with evil motives in the dead of night.

Apparently, the same idea exists with regard to the City Hall unicorn. It is given its malevolent powers because it is shone on by both the sun and the moon. At any rate it is supposed to have become a semi-deity in that it can only climb down at night to fly back when the cock crows. Once secured with the chain, however, it cannot move and the guardian lion is now looked upon as the benevolent deity with the solitary duty of preventing further ravages.”(2)

1, H. Damascene Ancient Chinese History in the Light of The Book of Genesis: http://www.orthodox.cn/localchurch/200406ancientcnhist_en.htm
2. The China Mail February 21st 1925

Richard-The Man from Del Forte
Posted by Jon Downes at 11:17 AM 1 comment:

THOUSANDS ON A RAFT

Whilst frowsting in bed and pottering about on Nature blogs yesterday (wayhay for laptops), I was on Bug-girl's blog (which usually makes me laugh) when I found this. Bug-girl herself admits that it "creeps her out a bit"..

Just in case the headline was too obscure...