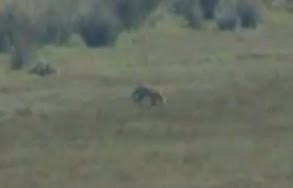 Over on their blog Centre for Fortean Zoology Australia have posted an intriguing piece of footage. Is this a thylacine?


You have got to check this out.

Mike and Rebecca's blog gets better and better with a whole slew of really important stories like this one. Which they got first!

http://www.cryptomundo.com/cryptozoo-news/knatterud-obit/
Posted by Jon Downes at 6:01 PM No comments:

A COUPLE OF COMPLETELY DISPARATE UPDATES 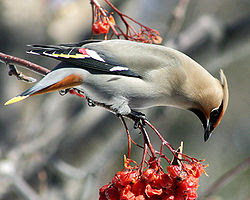 The current issue of my local paper has much coverage of a recent “invasion” of the waxwing, a rather attractive bird. So in a rare excursion into natural history rather than cryptozoology, here is what has been happening in the ornithological world in this part of England lately.

The rather lame headline on (Wed) November 10th was:

A beautiful bird has been spotted in Macclesfield this week thanks to the town`s bountiful berry supply.The influx of waxwings from their native arctic Russia and Scandanavia has created a buzz among the town`s birdwatchers. Some years, none come to country but when they do, Macclesfield is a prime location for the pink-ish bird about the size of a starling with a bold crest and intricate yellow and black waxy markings on their wing features. They are drawn to the rowan berry and hawthorn bushes planted years ago by Macclesfield council. On Macclesfield`s RSPB website there have been a couple of sightings logged at Standing Stones by Macclesfield Forest…[Treasurer] David Tolliday added “And in Macclesfield we`ve had a bumber year for berries thanks to a good summer.” Cheshire Wildlife Trust and the RSPB are calling for gardeners to avoid cutting berry-laden trees to give waxwings and other visitors like redwings and fieldfares the chance to feed. If you see a waxwing, go to bird.records@macclesfieldrspb.org.uk to report your sighting. (1)

Another part of the same paper said:

“Scouting parties [of waxwing-R] were seen as early as early as the last week of October, including 800 on Lewis in the Outer Hebrides and…

They will be checking for the much rarer cedar waxwing from North America. In 1996 one was seen with a flock in Nottinghamshire.” (2)


I think that I will hand that one over to Oliver.
Posted by Jon Downes at 10:01 AM 1 comment:

In answer to your plea for interesting Indian facts, here's a little unusual information regarding Indian animals.

HOW MAHOUTS DO IT

If you have ever noticed, zoo keepers and trainers are wary of bull elephants. This is because when in a state of sexual excitement they develop musth, a condition that makes them go bananas.

However, if you've ever seen pictures of Indian elephant parades in India, you may have noticed that they have bull elephants in them. How do the mahouts driving them stop them attacking everybody in sight if they are suddenly seized with musth?

It's simple: in such parades all elephants are caparisoned with gorgeous raiment, which cover their back and sides. Musth is a nervous condition. If you were to peek under the aforementioned gorgeous raiment, you would find a network of ropes and knots. Each knot is carefully placed alongside the nexus of various nerves. If the elephant shows signs of musth, the mahout simply pulls on the end of the rope. The knots tighten on the nerve centres, stopping the progress of the musth, so it doesn't travel around the elephant's body, causing it to go wild.

So, at least, I understand.

Camels also get musth, but I don't know what you do with them. All I can suggest is speaking soothingly, but I have a funny feeling that wouldn't work.

If visiting the Punjab and you stray too near a riverbank, Indian belief will tell you to take care with any jalparis you might encounter. If you are male, a jalpari may emerge from the river. She may try to seduce you. If you rebuff her, beware! She will drown you.

Ronan.
Posted by Jon Downes at 9:58 AM No comments:

On this day in 1532 Francisco Pizarro and his men captured the Inca emperor Atahualpa. He was executed on the 29th of August the next year, effectively ending the Inca Empire.
And now, the news:

Tiny southern pine beetles chew through 14,000 acr...
Coral near Deep Water Horizon well is dead or dyin...
Gay vultures split up by zoo to make babies
Eggs with the oldest known embryos of a dinosaur f...
Mountain lion sightings more common, but still rar...
Was it a Eureka moment?

Presenting a gibbon with a tiger related death wish:
http://www.youtube.com/watch?v=1AZn5nWIj_g
Posted by Jon Downes at 9:58 AM No comments: