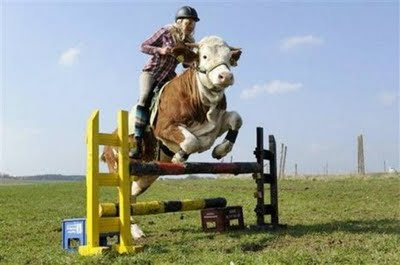 “Luna” cow can jump like a horse? Well, that appears to be the case for “Luna,” a Germany-residing cow who thinks she’s a horse and behaves like one too.

Schoolgirl Regina Mayer, who lives on a farm in Laufen, Germany, didn’t worry when her parents couldn’t afford to buy her a horse – she just trained her cow to ride instead, reports USA Today.
The resourceful 15-year-old spent hours training Luna and the pair now go on long rides together. Luna can also jump over hurdles.

After hours of arduous training, the pair regularly embark on long rides through the southern German countryside and do jumps over a makeshift hurdle of beer crates and painted logs, USA Today reports.

Read More At
http://www.l.md/cow-that-jumps/
Published with Blogger-droid v1.6.8
Posted by Jon Downes at 12:25 PM No comments:

Whilst looking up something in Sahara by Renė Gardi on dwarf crocodiles in Chad (which I found) I also found another item I have hitherto missed although I have owned this book for over 2 years. As follows:

“All sorts of old wives` tales are current among the peoples of the Sahara. They tell of animals with iron heads which pierce their victims while in flight, of fiery snakes and huge, hairy monsters, more than thirty feet long.” (1)

This is all it says. However in a book published as recently as 2004, Sahara The Life of the Great Desert there is also mentioned dwarf crocodiles in Chad in the early 21st century.

When I receive a cryptic email from Doug Shoop containing just one word: OTTERS! I am intrigued. So I follow the link, and find some remarkable footage of a wild otter in Minnesota.
http://www.dnr.state.mn.us/volunteer/mayjun11/otter_video.html
Published with Blogger-droid v1.6.8
Posted by Jon Downes at 12:20 PM No comments:

http://hauntedskies.blogspot.com/2011/04/rocket-manowlman-and-abbey-dog.html
Published with Blogger-droid v1.6.8
Posted by Jon Downes at 11:54 AM No comments:

On this day in 1944 John Rhys Davis was born. Davis is probably best known for playing Sallah in the Indiana Jones films (or 'Raiders' films as true fans such as myself, Spielberg and Lucas refer to them) and Gimli in the Lord of the Rings films.
And now, the news:

'Yeti hand' replica to be returned to Nepal monast...
The Olmec Dragon
The monster of Billings Dam
Dingoes Didn't Run Tasmanian Tigers Out of Austral...

And my axe:
http://www.youtube.com/watch?v=pxPGzj2L3n0
Published with Blogger-droid v1.6.8
Posted by Jon Downes at 11:53 AM No comments: