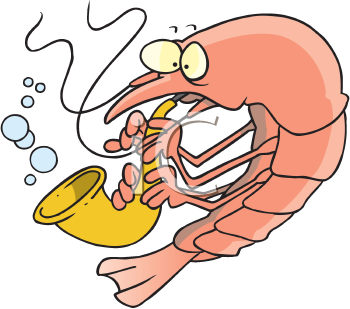 Somewhere in the last few days whilst the Core CFZ Team here at Myrtle Cottage were spluttering around in a sea of phlegm and bad attitude, the hit counter on the blog passed the 1.5 Million mark!


I would like to say that I am feeling quietly pleased with this result, but in reality I would be rushing around the house shoutinmg `HUZZAH!` if I didn't still feel so bloody ill.


So here is a picture of a prawn playing a saxophone, instead!
Posted by Jon Downes at 6:25 PM 1 comment:

The guppy weekend has been confirmed to take place on Saturday 19th and Sunday 20th February 2011. The event will again be held at the Nottingham Gateway Hotel, just off junction 26 of the M1 motorway in Nottingham. It is the same venue as last year's guppy weekend and of course the BLA Convention and Guppy Show in October. Rooms (including breakfast) will cost £59.00 for a single room or £65.00 for a double/twin if they are booked through the organisers. Anyone who wishes to book their own accommodation, and also anyone who will be attending as a 'day visitor' please inform Steve Elliott in order that appropriate facilities can be organised.
Anyone is welcome to attend - you do not have to be a member of the BLA, and indeed the event is FREE. The first leg of the UK guppy League will take place on Saturday afternoon. Sunday will include a run through of the results and even the chance to have a go at judging the fish, if that is what you wish. A great opportunity to see all the good features of live fish rather than pictures!

It is very important that those who will be attending contact the organisers to book a place. Please contact Steve Elliott Stephen.elliott1@virgin.net to book a place or to book accommodation.
Posted by Jon Downes at 12:44 PM No comments:

Email ThisBlogThis!Share to TwitterShare to FacebookShare to Pinterest
Labels: guppy

On Dec 28th a Greenland sleeper shark (Somniosus microcephalus) beached itself at Aalbaek i northern Denmark. The shark, of which there has been only 19 other recorded finds in Danish waters, measured some 280 cm in length. And to add a little bit of coincidence and synchronicity, the shark decided to end its days on the same spot where a giant squid beached itself in the early 1800s, enabling danish zoologist Japetus Steenstrup to publish the first scientific description of a giant squid (the beak can still be seen at the museum in Copenhagen) and realise that this animal was the culprit behind stories about sea-monks.

A picture of the shark can be seen on this danish website:

OLL LEWIS: Good for the Sole? 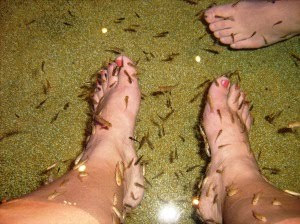 In recent months people in the UK have been doing something a bit odd. They have been feeding themselves to fish.

The reason for this is not out of some sort of random philanthropy towards our finned friends but as a sort of 'natural' pedicure. The idea is that you put your feet or hands in a tank full of Garra rufa or doctor fish and they eat the dead skin from your feet. Although the procedure might seem to venture into 'alternative health' therapy the process is apparently well regarded by some scientists as a treatment for psoriasis and eczema much in the same way that leaches are used in some medical procedures.

The first public spas offering this fishy exfoliation opened in Japan and Croatia in 2006, with the first American spas opening in 2008. The first UK spas opened in 2010 and in a relatively short short space of time many spas have opened, including two in the same shopping arcade in Cardiff over the Christmas period, with many more spas planned.

However, in America and Canada Garra rufa spas have been banned in several states due to sanitary concerns by cosmetologists. They took the opinion that the process of fish pedicures should be banned since the fish could not be sterilised by heat after use or disposed of after one use. Other cosmetologists argue that the process is perfectly sanitary and a sanitary process is quite adequate in a situation like this when full sterilisation is not possible. No British politicians have expressed a wish to ban Garra rufa spas in the UK as yet but as this is a procedure that is becoming increasingly popular I expect this debate may well start here in 2011.
Posted by Jon Downes at 12:18 PM No comments:

THE RECENT BIRD AND FISH DEATHS

Sometimes, as Freud is supposed to have said, "a cigar is just a cigar" and quite often what appears to be strange and mysterious turns out to be nothing of the sort. As the immportal Half Man Half Biscuit once sang "James Dean was just a careless driver, and Marilyn Monroe was just a slag". But it is unarguable that both within the world in general and within that rarified subset containing those folks who are interested in forteana, there are times when groups of apparently weird events that may or may not be connected grab the public imagination.

It is the way that people get enthusiastic about a subject that interests me as much as the events themselves. The most notable such series of events took place in August 1997 following the death of Diana Princess of Wales. The UFO buffs, conspiracy theorists and secret historians had a field day. Even dear old Margaret "The Divine King in England" Murray got dragged kicking and screaming into the fray when it was suggested that Di was a living sacrifice to someone or other.

Her driver was drunk. Get over it.

But the aetiology of the mythology that built up around Princess Diana's death is and was fascinating. On a smaller scale one can see the beginnings of a similar process taking place with the stories of bird and fish die-offs around the world. The words 'sacrifice' and 'occult significance' are already beginning to be heard, and amongst the Natural History community, the significance of these events, and any common cause for them, are already being hotly debated.

So, forgive me, but I shall carry on posting stories relating to these events as and when I get them. Not only is the fact that so many animals dying at once of great concern, but the human response to these incidents is - to me at least - absolutely fascinating.
Posted by Jon Downes at 11:49 AM 1 comment:

On this day in 2005 NASA launched the Deep Impact space probe. Deep Impact collided with comet 9P/Tempel on the 4th of July 2005 and was able to provide close up photographs of the comet and details of its composition.
And now, the news:

Frog hitches ride with snake to flee floods
Swedish bird mystery: Deaths due to 'external inju...
More than 1,000 turtle doves fall from the sky in ...
It's the Aflockalypse: More mass animal deaths see...
10,000s of Birds found dead in Manitoba
Brazil To Intensify Crackdown On Biopiracy in 2011...
Researchers to drill for ancient DNA in 'hobbit' t...

Every time hobbits are in the news:
http://www.youtube.com/watch?v=XC73PHdQX04
Posted by Jon Downes at 11:49 AM No comments: