From CFZ Australia:
An age of antipodean minifauna?
Meet the Cryptozoologist: Paul Cropper
New from CFZ Press - May 2011
Echidna DNA paves way in genome project
Posted by Andrew May at 1:34 PM No comments:

http://hauntedskies.blogspot.com/2011/05/president-lionel-beer-of-bufora.html
Posted by Jon Downes at 12:29 PM No comments:

Graham left yesterday for a fun-packed fortnight during which he will see Hawkwind ("goodness me," I hear you exclaim. "We never knew he was a fan!"), fly to the Isle of Man to help his mother move house, and visit his aunt in Budleigh.

We expect him to return on or about Thursday 2nd of June. Have fun, dude....
Published with Blogger-droid v1.6.9
Posted by Jon Downes at 11:28 AM No comments:

RICHARD FREEMAN SHOULD TELL US WHAT HE REALLY THINKS

Call me old-fashioned but any film that seeks to make heroes out of gangs of chav, hoodie criminal scum is never going to sit right with me. At the start of the film a bunch of cowardly, knife-wielding thugs mug a lone woman for her mobile phone. Then we are expected to except them as the heroes of the film. I think not.

Also the film has a nasty anti-intellectual streak running through it. A clever youth is sneered at simply for knowing zoological terms. The message this cinematic turd is sending out is that it’s fine to be a rap-obsessed, violent, yellow-bellied, thieving piece of filth but it’s laughable to be intelligent. I’ve seen this growing in UK society for years.

The patois spoken by the gang involved is so impenetrable that it makes Nadsat from A Clockwork Orange look like the Queen’s English. The films glorification of drug ‘culture’ is exceptionally unpleasant as well.

The plot line could be written on the back of a fag packet. For what it’s worth, here it is. Fresh from mugging a single girl the band of teenaged thugs are attacked by a small alien that drops from the sky into a car. They manage to kill the baboon-sized beast. Unknown to them it is a small female and now the gang leader has alien pheromone all over him. Larger male aliens fall to earth in meteors and start to persue the gang leader, killing everyone in their path.

Attack the Block fails as science fiction, fails as drama and fails as comedy. The aliens themselves look great: like a cross between black shuck and a gorilla with spiky fur so dark it stands out against pitch black and jaws filed with rows of luminous turquoise teeth. They would look marvellous in an episode of Dr Who, but here they are just wasted. Also there are no adequate explanations as to why the creatures come to Earth in the first place.

Not even Nick Frost can save this one. God knows how they roped him into this flick but they give him no decent lines and his character doesn’t really get to do anything.

A sloppy, lazy plot with incomprehensible script and a truly vile sound track (I loathe rap ‘music’ - you might as well listen to road works and call that music) are the icing on the crappy cake that is this film. I once spent a night drinking with a Hollywood producer and a Hollywood director in a remote bar in rural north Devon. I asked them how god-awful scripts and ideas are turned into films. They told me that it’s all a matter of knowing someone on the inside or being an insider yourself. Like TV, the film world revolves around nepotism. If this script had not been written by one half of Adam and Joe but by your average Joe then it would never have seen the light of day.

Avoid this utter discharge at all costs. Don’t waste time watching it at the pictures. Don’t bother buying the DVD when it comes out. Don’t even bother watching it when it turns up on some crappy cable channel at one in the morning.
0/10
Published with Blogger-droid v1.6.9
Posted by Jon Downes at 11:21 AM 1 comment:

ANOTHER PECULIAR STORY FROM THE 'OLD HONGKONG' NEWSGROUP 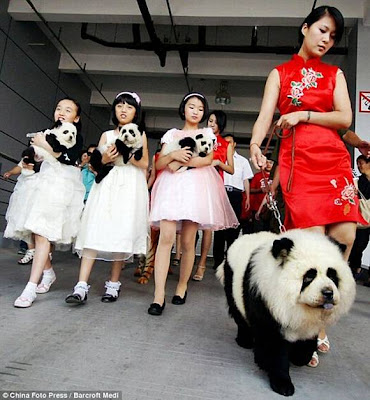 Dogs Painted to Create Panda Dogs and Dog Tigers
The mysterious human desire to paint its pet dogs so that they look like other animals which are not dogs has reared its head once more, with a selection of painted dogs being displayed in China. The painted dogs in question were on display in Zhengzhou, in eastern China’s Henan Province, at what appears to have been a veritable festival of dog painting.

As well as the tiger-dog, there were a number of rather adorable fluffy panda-dogs being shown to the crowd. Exactly why people are so keen on the trans-species decoration of their dogs is not especially clear, but the effort is appreciated. Except, perhaps, by the dogs....

Email ThisBlogThis!Share to TwitterShare to FacebookShare to Pinterest
Labels: china

RIP baby gorilla:
http://www.youtube.com/watch?v=wHjieD6CTYs
Published with Blogger-droid v1.6.9
Posted by Jon Downes at 11:13 AM No comments:

I have never liked Friday the Thirteenth, but it was not until yesterday was over that I realised the significance of yesterday's date; Blogger had been playing silly buggers since Thursday morning, Graham had finally managed to post Thursday's blogs by early afternoon but an hour or so later they had disappeared. It was impossible to post anything until early evening yesterday, and Andrew, Gavin and I each decided that it would be unwise to post anything until the system had stabilised.

In the meantime, I was ill and felt horrid, so I spent most of the day in bed, leaving the CFZ in the capable hands of Corinna, Graham and Oliver. So that's what happened yesterday!
Published with Blogger-droid v1.6.9
Posted by Jon Downes at 11:02 AM No comments:

http://frontiersofzoology.blogspot.com/2011/05/repost-dale-drinnon-sisimite-tzitzimitl.html
Published with Blogger-droid v1.6.9
Posted by Jon Downes at 10:11 AM No comments: