CARL MARSHALL: The sad tale of the black fox 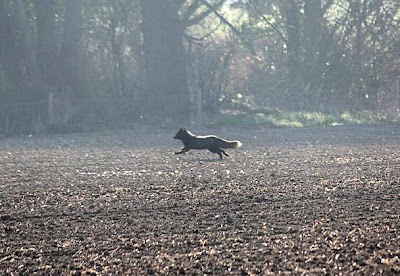 When amateur photographer John Moore 58, took some shots of an elusive dark coloured predator near his home in Bassingbourn, Cambridgeshire, he automatically thought it was an escaped dog, but was surprised to discover that it was actually a very rare, wild black fox.

Many believe that this fox was nothing more than a red fox (Vulpes vulpes) that had kept its dark cub's coat due to a genetic abnormality (Sun newspaper), however my perspective on this is that it could also quite easily be of a dark phase Arctic fox.

The Arctic fox (Vulpes lagopus) is a small fox native to the Arctic regions of the northern Hemisphere and common in the Arctic tundra and is quite adapt at surviving in various locations. However this species is at threat of being out competed by the red fox (V.vulpes).

The Arctic fox has a low surface area to volume ratio; evident by its rounded body shape, short muzzle and thick ears which assist it when dealing with the cold and are therefore more proficient than other fox species at doing this. (see John Moore photo's). Even though the Arctic fox coat is darker in summer, and thinner than the all white winter coat, it is still thicker than the normal winter coat of V. vulpes.

In my opinion the black fox in the photo's is possibly to small to be a healthy adult, melanistic dog fox of the species V. vulpes; of which it would have to be going by the thickness of the tail, also it has very rounded ears not dissimilar to those of the Arctic fox. (see taxidermic photo) However the mounted specimens ears are facing further forward than on the live fox.

The muzzle also seems to be too short for the red fox and the tail is far too thick to be of a vixen of this species anyway.

In the photo of the fox running through fields away from the camera, it appears that it has a silvery-blue sheen on its flanks just like that of the Arctic fox in summer, although this could just be how the reflective qualities of the light were catching the animal at the time.

There have been many reports of Arctic foxes surviving in the wilds of Britain as they were introduced here for the fur trade: some 150 Arctic fox fur breeders were listed in the British Fur Trade Year Book 1933 and considering the likely poor quality of some enclosures, escapees were inevitable.

I personally used to have a wi 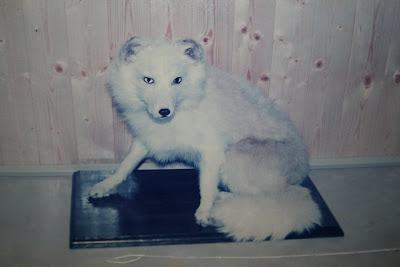 ld specimen that was previously killed by a dog in Nuneaton, Warwickshire in about 1979-1980, and mounted by my father. (see taxidermic photo).

This black variety would be a very unusual mutation of the red fox, but this colour phaze would be quite typical for the Artctic fox in certain regions in warmer months. This species often lives in pairs, so I think it not impossible that another black specimen may also turn up in the near future, possibly with cubs of which about 5-8 are born in a litter.

I have no doubts whatsoever that V. lagopus is viably living wild in the UK and I believe the animal photographed by Mr Moore could well be of this species, not V. vulpes.

So, whether a hypermelanistic red fox or the (very dark) summer phase of the Arctic fox, its certainly of huge interest for zoologist and the cryptozoologist alike. 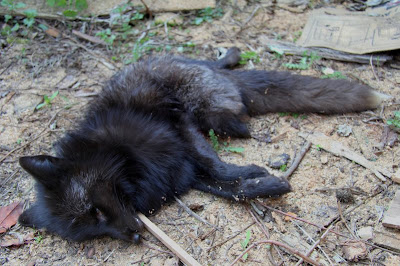 More on the Mystery Fox.
Sadly the melanistic mystery fox photographed by Mr John Moore has apparently been hit and killed on a busy road in Bassingbourn Cambridgeshire.
The animal was seen running up the road where it was unfortunately hit by a motorist. Help was called to the stricken creature but it sadly passed away soon after; probably from internal injuries.

Mr Moore has claimed that he has seen another black specimen in the area, this time a cub, and intends to get photographs of it. (However it is a little early to see cubs, which are usually seen later on in the year. I suggest he may have observed another smaller adult).

The dead fox in the photo's does appear to have a blueish silver iridescent sheen to its coat, like that of the blue phase of the Arctic fox, however I believe black phase red foxes can sometimes be of this appearance.

This posses some thought provoking questions that may be answered at a latter date; was this an Arctic fox and are there any more out there, naturalised or otherwise? is it possible it/they escaped from captivity recently rather than being a true wild animal? Could this explain why the fox was seen running up the middle of a main road in day light?

Was it lost and hungry? was it trying to find its mate or even its enclosure?
Was this even the same animal that was photographed running through fields recently?

One to ponder over anyway!

http://criptozoologos.blogspot.com.es/2012/03/un-yeti-cerca-de-irun.html
Posted by Jon Downes at 3:08 PM No comments: 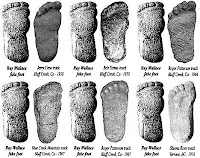 From CFZ Australia:
From CFZ New Zealand:
From CFZ Canada:

Posted by Unknown at 2:04 PM No comments:

On this day in 1966 the USSR launched Luna 10, which became the first craft to orbit the moon.

New at the Frontiers of Zoology,
Photographic evidence for the FW monkey in Arkansas (a sort of a Mini-Momo?):
http://frontiersofzoology.blogspot.com/2012/03/another-possible-fw-monkey-in-arkansas.html

New at Frontiers of Anthropology, Kakha Margiani sent in links regarding his theories, previously mentioned on my blog:
http://frontiers-of-anthropology.blogspot.com/2012/03/re-surveys-of-atlantis-3.html

And on Benny's blog, a reprint from a 1930s magazine about Hollywood's Unsolved Mysteries:
http://benny-drinnon.blogspot.com/2012/03/hollywoods-unsolved-mysteries.html
Posted by Jon Downes at 11:31 AM 1 comment: