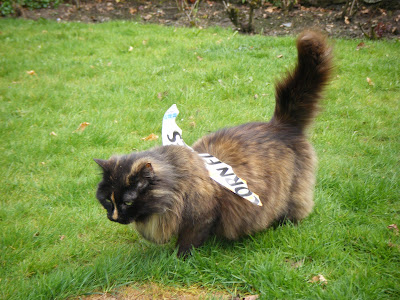 April 1st 2011: In a world exclusive CFZ member Mimsy Barraclough and his adoptive son Tarquin Bellows have tracked down a most singular animal in the town of Piddlehinton, Dorset. A genuine winged cat!

Barraclough, a retired classical actor who specialised in playing the back end of pantomime horses, was taking his adoptive son, discredited former spirit medium Tarquin Bellows, on tour of the great scone shops of Europe and had stopped off in Piddlehinton to purchase a Milky Way chocolate bar to tide them over until lunch time when he spotted the creature out of the corner of his eye.

“I just couldn’t believe it! I mean, one reads about these things in popular literature and indeed the fine books published by the Centre for Fortean Zoology, whose website is http://www.cfz.org.uk/ , but you don’t expect to actually get the chance to see and photograph one in the flesh!

“This is the second greatest experie 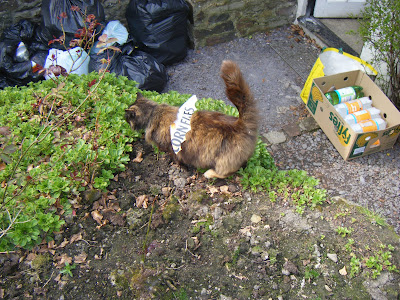 nce of my life!” Barraclough gushed.

“The only experience I’ve had that tops this is when I was the back end of Dobbin The Bold in the 1982 production of Cinderella at the Skinning Grove Empire when I got to act with both the legendary Christopher Biggins and the late Jim Davidson who had stood in at the last minute for Charles Hawtrey who was off doing something involving brass bedsteds and Simon Sharma at the time. I received a standing ovation at the end of that run as well, actually, so I guess that knocks the winged cat into 3rd place, now I think of it. It takes a lot of effort to accurately portray the back end of a pantomime horse and it is nice to get some recognition sometimes.”

Tarquin Bellows picked up the story of the sighting:

“We had just been thrown out of the village shop after Father (adoptive) had flown into a fit of rage because they didn’t have any Milky Ways. They had offered him a Chomp bar instead but this had only angered him more as he thinks Cadbury’s is a girly make of choc 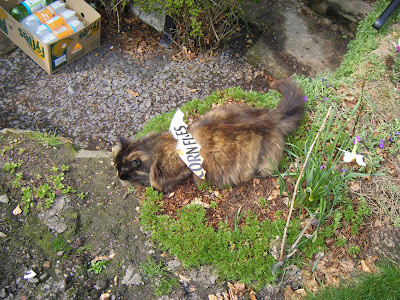 olate that dries his mouth and he enquired as to whether the shop assistant knew who he was. As the shop assistant was only 16 they did not and that is when Father (adoptive) got really mad and started proclaiming at the top of his voice to all and sundry that he had nearly been in Rentaghost once and about kids today being unaware of the fact that they were born.

“When Father was outside his loud rantings were still continuing and they scared a cat down from a tree on the village green. I noticed there was something odd about this cat and so did Father who thankfully calmed down almost instantly and got out his camera. Neither of us could believe our eyes: it was a winged cat.”

According to both Barraclough and Bellows the cat didn’t actually do much and went to sleep in a flower bed, possibly dreaming of chasing a ball of wool or jumping in and out of a cardboard box.

For reasons not unconnected with my insomnia of the night before last, this month's edition of On The Track will not appear until tomorrow. Never mind - it will be worth the wait....
Posted by Jon Downes at 1:13 PM No comments:

ISSUES WITH BLOGGO AND AMAZON

Both Blogspot and Amazon.co.uk appear to still be being recalcitrant: formatting commands disappear at will on the blog, and according to Amazon.co.uk, all of our new books will still take several months to arrive. This is most unfortunate because it means that our new titles are just not being given a chance, and I would hate them to sink without trace. However, the situation at Amazon.co.uk is being worked on (so we are reliably informed) and there are so many complaints about the formatting issues the Blogspot help forums that one would like to think that the owners - Goofle - will do something about it.
Posted by Jon Downes at 1:13 PM No comments:

ROBERT SCHNECK: It Came From the Elephant's Graveyard

Anyone that loves pop-horror loves Tales from the Crypt (this is not up for discussion), and everyone that loves Tales from the Crypt loves the artist Graham Ingels (they were all good, but if Jack Davis was Raphael, Graham Ingels was Michelangelo). Obviously Tales from the Crypt, Graham Ingels, and ZOMBIE ELEPHANT, well...,that's just the apogee of wonderfulness. I don't know the story these panels come from, but have read enough comic books to guess that Milo, the furry-armed pith-helmet dropping an ankus, was married to a famous elephant trainer named Emma, whose prize elephant was Rene. Milo began holding hands with Leeta, the blonde bursting out of the aubergine dress, and the two of them killed Emma, pinned it on Rene, and he was destroyed. The dastards were feeling awfully pleased with themselves when suddenly: 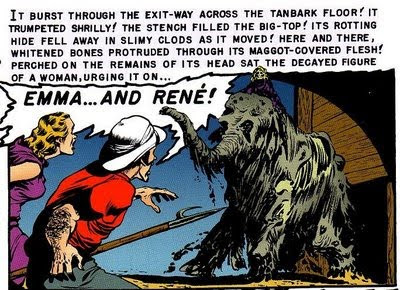 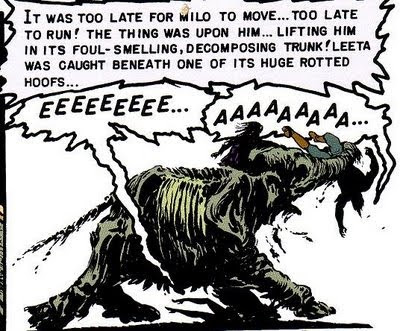 On this day in 1976 the Jovian-Plutonian gravitational effect was observed for the first time. According to Sir Patrick Moore, the effect, which made people light enough to briefly float if they were in the air at 9.47 am, was caused by a unique conjunction between the orbits of Jupiter and Pluto. You can read more about it here:

Talking of Charles Hawtrey, here's a compilation of the best bits from Carry On Up The Kyber: http://www.youtube.com/watch?v=i8atKXFZefA

DALE WRITES AN EDITORIAL ON HIS "SEE NO EVIL" CONTROVERSY

http://frontiersofzoology.blogspot.com/2011/03/see-no-evil-blog-postings-editorial.html
Posted by Jon Downes at 12:13 PM No comments: